We’ve previously discussed our modestly constructive economic outlook for China—the first country to be severely impacted by the coronavirus, but also the first to chart a path back toward normalcy. Today, China’s economic recovery continues ticking along, and we are even seeing some indicators showing growth relative to last year. It’s important to highlight that the weighting of China in the MSCI Emerging Markets Index also continues to grow, and is now almost at half of the index.

Beyond China, however, we think that the outlook for emerging economies is challenging in the near–term. Importantly, though, as we start to see signs of success among other emerging markets in managing the COVID–19 outbreak, we do see some tailwinds on the horizon.

Let’s begin with the shorter–term challenges in emerging markets (EM). First, the outbreak of COVID–19 has been severe in most of these countries, with nations such as Brazil, South Africa and India finding the virus difficult to contain. The charts below show the daily new cases for the major EM economies—note that the charts are in log scale. Brazil, South Africa and India all are experiencing over 10,000 new cases per day. More concerningly, the testing rates in these countries remains quite low, suggesting that the actual number of infections may be much higher. 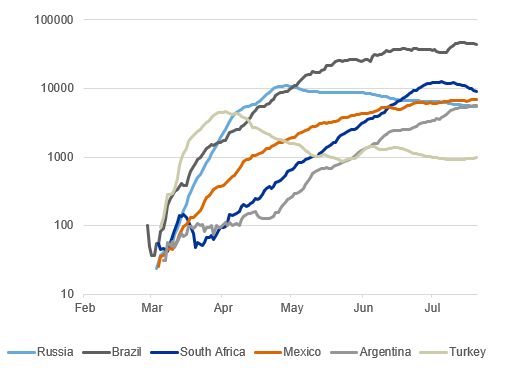 The second challenge for emerging markets is that the stimulus response from authorities has been more muted than in developed markets. While the central banks of EM nations went into the crisis with more firepower than their developed peers—allowing them to cut interest rates more aggressively—the asset purchase programs in these nations have not been as expansive. Note that in some countries, including Brazil and Indonesia, there is still room for further rate cuts if necessary, given that real rates (i.e., cash rates adjusted for inflation) are still positive.

On the fiscal side, EM governments in general have had less room to introduce big budgetary measures. The Bank of International Settlements notes that EM budgetary and guarantee measures amount to about 3%, compared to closer to 15% in developed markets* (a percentage that is likely to increase further when U.S. lawmakers reach a deal on a second coronavirus stimulus package).

Third, the combination of limited exports and high levels of external debt also poses a financing risk for some EM nations. We see this as less of a risk than the previous two, but one worth keeping an eye on. In particular, Indonesia, Brazil and Russia stand out as having high levels of external debt—of which about 10–15% is in shorter–term debt.1

Having focused on the shorter–term headwinds, it’s important to note that we do foresee some tailwinds for emerging–market assets, particularly as EM countries pull through the COVID-19 crisis.

Top among these is that the resurgence of global growth tends to be good for higher beta—or more volatile—equities, such as emerging markets and Europe. In essence, the desire to hold U.S. dollars fades as more countries begin to recover economically, which in turn weighs on the U.S. dollar. Ultimately, this provides some breathing room for economies with high levels of external debt, such as the ones mentioned above.

Of course, to the extent that this leads to currency appreciation, this could provide a small headwind to export attractiveness. We have seen this dynamic start to play out already, as shown below, with most EM currencies appreciating against the U.S. dollar since the trough in the S&P 500 Index on March 23.

Today, emerging–market economies outside of China are confronting a slew of near–term challenges, primarily due to difficulties in controlling the COVID–19 outbreak as well as fiscal–stimulus constraints. Assuming that these nations are better able to manage the virus over the next several months, we believe that the higher beta nature of these economies, coupled with a weakening of the U.S. dollar, could become tailwinds as the global economic recovery continues.