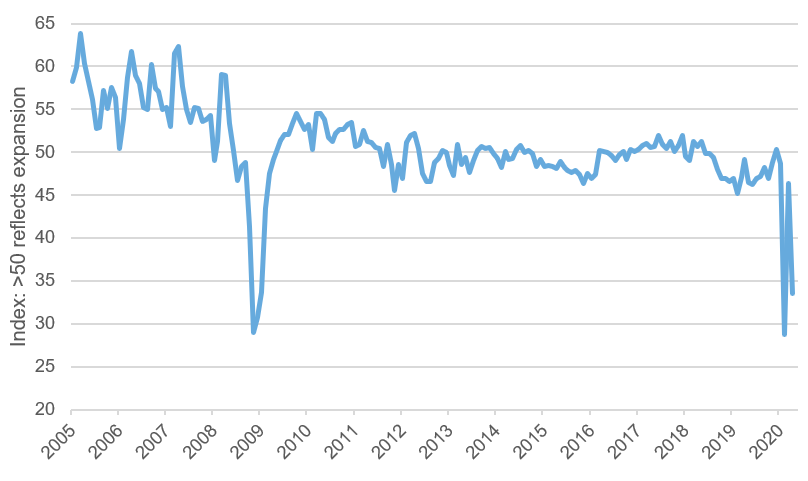 The manufacturing sector’s normalization over the next few months is going to continue to face the headwind of soft global demand, given the lack of activity in the rest of the world. This will disproportionally weigh on private companies, which tend to be more export oriented.

The Chinese government has also been very active in providing medical support to nations facing the outbreak, including sending ventilators to Italy. Most recently, China has provided testing kits to Saudi Arabia, Iran and Nepal. Off the back of this, amid concerns about equipment shortages, the outbreak has revealed some concerns about the level of dependence on Chinese manufacturing in relation to medical supplies. More than 40% of all personal protective equipment (PPE) used globally comes from China2— and we think that one of the likely consequences of COVID-19 will be a concerted push to reduce that proportion.

Along with the supply of PPE and other medical supplies, tensions between China and the United States (and to a lesser extent, Europe and Australia) have been rising over the origin of—and responses to—the virus. There have been several headlines around ramifications, which have included the selling of U.S. Treasuries by China and a return to tariffs and protectionist policy. Of these, the latter would be the most damaging to financial markets and the economic recovery globally.

Attempting to predict the actions of President Trump or President Xi can be difficult at the best of times, let alone during a deep recession and the lead up to the U.S. election. Clearly, China-U.S. relations have deteriorated in the past two months. However, the reintroduction of tariffs would create a headwind to the economic recovery and to the stock market (something which we know President Trump puts some emphasis on).

If the 2018-19 trade negotiations are a guide, one thing we can expect is volatility around changing headlines. Another risk to the trade relationship is the Democratic candidate for U.S. president, Joe Biden, presenting a tougher view on China, which has the potential to force Trump’s hand.

Looking ahead, we are closely watching China’s purchases of U.S. goods in the short term. Given the shutdown of the U.S. economy in the first quarter, it is going to be very difficult to achieve the agreed-upon purchases of the Phase 1 trade deal. However, a ramping-up in purchases could be enough to ease tensions, particularly in the eyes of President Trump. Energy purchases could be an easy candidate, given China has storage capacity, and that would alleviate some of the storage concerns in the U.S.

On China's domestic economy, our focus will remain on credit growth, as well as the upcoming National People’s Congress meeting in the latter half of May. We’ll continue to keep you apprised of the latest developments. Stay tuned.