Evaluating growth and value stocks in the era of COVID-19

How are growth and value managers considering risks and opportunities amid today’s highly uncertain environment? We recently sat down with two of our hire1 rank managers, one from each side of the coin, to discuss.

Barry Dargan is the chief executive and portfolio manager at Intermede Investment Partners, a global equity investment management firm based in London, England. In his day-to-day role, he looks for high-quality, long-term compounding growth stocks.

Patrick Kaser is a managing director and portfolio manager at  U.S.-based Brandywine Global Investment Management. He concentrates on traditional value investing—searching for good companies with good cash flows that are undervalued, relative to his team’s assessment of fair value.

Both Dargan and Kaser are preferred managers in Russell Investments’ U.S. and global equity portfolios, and were guests at our recent institutional webinar attended by U.S. and Canadian clients. Here are their thoughts on growth versus value.

As a growth manager, Dargan’s primary mandate is to find long-term, compounding quality growth companies with strong franchises and excellent management that can deliver on earnings growth, time and time again. Essentially, he looks for growth names that he believes will outperform over the long term.

“Being a growth manager is very much about being a long-term investor,” Dargan said. With this in mind, he shared the results from the past 30 years to see how capital-intensive companies—those that require large amounts of investments—have performed in markets when compared to companies with low capital intensity. The verdict?

Low capital-intensity companies—such as many of those within the technology, healthcare and consumer staples sectors—have significantly outperformed capital-intensive companies in the industrials, materials, telecommunications and utilities sectors. Despite some periods of weakness following the technology, media and telecom bubble of the late 1990s and the Global Financial Crisis (GFC) in 2008, cumulative performance of low capital-intensity companies has been strong—and even accelerated—over the past 10 years.

These are the type of companies that Dargan, as a growth manager, is looking to find in the era of coronavirus. “The inefficiency that we’re trying to exploit here is the fact that the stock market doesn't give full credit for the power of compounding to companies over the long haul,” he remarked.

“As a value investor, I often joke that I'm one of those people standing alone in the corner at a party—the person no one wants to talk to,” Brandywine’s Patrick Kaser said. Today, amid the severe economic downturn brought about by COVID-19, this probably holds true more than ever, he added.

And yet, there may be no better time than now to start thinking about value stocks, Kaser said. Why? At its core, value investing anchors around exploiting short-term human behavior. Essentially, investors place too much of a focus on short-term outlooks, he said.

“People often anchor themselves far too much to negative or positive news in the short-term,” Kaser explained,“ and it’s this very bias that creates opportunity for value managers.” Over the past month, for instance, negative short-term sentiment has led to very cheap valuations for some stocks, he said.

Like growth investors, though, value investors also need to take a multi-year approach, as they don’t necessarily know which sectors, industries or parts of the market might fall out of favor. “Generally speaking, you need to be willing to cast a pretty wide net, often over a number of years. Patience is required to exploit time-horizon biases,” Kaser said.

Kaser sees two main opportunities for value investors to exploit amid today’s turbulent environment. The first is the spread between value stocks and low-volatility stocks (such as utilities and consumer staples). Why? This spread is now twice what it was during the tech bubble of the early 2000s, which Kaiser said is largely unprecedented.

The second opportunity centers around the relative valuation of growth stocks versus value stocks. The price-to-earnings spread between the two has now widened to levels in line with those seen during the tech bubble. This is because many investors are paying a premium for growth stocks right now, as they fear that value names won’t experience much growth, Kaser explained. 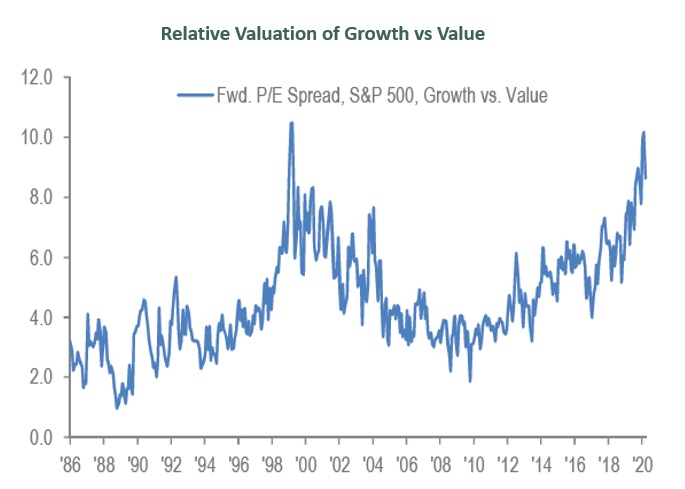 As of: March 2020, Source: J.P. Morgan
The Fwd P/E is a measure of a company's stock price divided by its future (forward) earnings estimate. The chart shows the difference in Fwd P/E (price-to-earnings) between growth companies and value companies in the S&P 500 Index.

Intermede’s Barry Dargan believes that changes brought about in the past two decades will continue to help higher quality, long-term growth companies deliver—despite the coronavirus pandemic.

“There's been an enormous amount of consolidation in the stock market among companies within industries over the last 30 years or so, particularly over the last 20 years. Essentially, companies have been buying each other. The net effect of this is that the top four companies in most global industries now have, on average, 30% of the total industry revenue—compared to roughly 20% in the past,” he explained. Ultimately, said Dargan, this concentration has led to rising returns and an increase in profitability for companies.

A lot of these companies—which Dargan refers to as super companies—benefit massively from incremental users, which can be acquired at no cost. “Companies like Facebook, Google, Mastercard and Visa have this network effect about them, which leads to extremely high returns—and makes it extremely difficult to compete against them,” he explained. Dargan believes that while the pandemic may cause these companies to be eclipsed a little bit in the short term by others, taking a long-term view argues for their continued strong performance.

“Several large tech companies and certain industries will benefit immensely from the increasing reliance on technology that this pandemic has brought about—especially in the long term,” he said.

Value investing: The earlier, the better?

When it comes to timing, Brandywine’s Patrick Kaser says that, historically, value stocks tend to be explosive coming out of a recession, while typically faring much weaker heading into a recession.

The recent market environment has been particularly unique, he said, because value has—by some measures—underperformed for the last 14 years. “By and large, it’s been more than a decade of pain for value stocks, which is an extensive length of time, relative to any other period in U.S. history,” Kaser said. Not surprisingly, the pandemic has only made things worse, he added.

The valuation dispersion between the cheapest U.S. stocks and the average U.S. stock is now at a level of disparity seen only twice since 1926. This brings about the question: Can growth really continue to outperform from here on out? Can the spread between the two styles continue to widen? 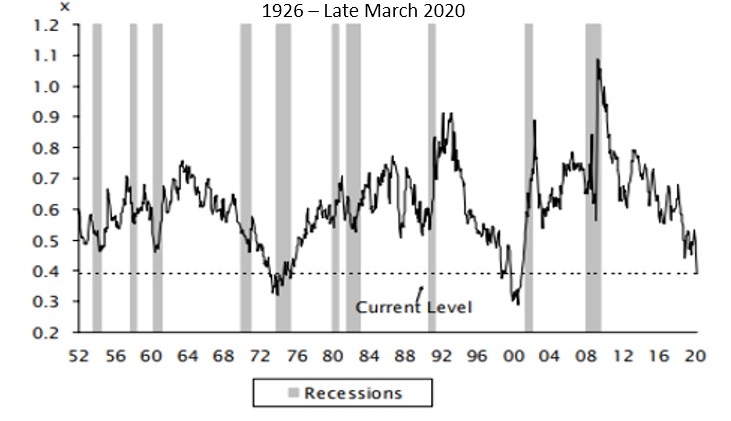 
This chart shows the large-cap stocks that are in the lowest quintile (bottom one-fifth) of all large-cap stocks based on their trailing P/E ratios. Prior to 1952,  the spread was measured using the price-to-book data as of the largest 1,500 stocks.

History argues that value can make up a lot of ground very quickly once the spread gets too wide, Kaser said. He refers to these periods in which value stocks explode in price as violent snapbacks.

These snapbacks are triggered by investor behavior, he said. “There’s a behavioral element in people that makes us want to wait until the future looks more secure—until the economic recovery is actually visible,” Kaser explained. Value investing can exploit this, he said, by assessing the fundamentals of companies that have been beaten up by the downturn. “Once we do the background work, as value investors we might say, No, it’s not too early to start buying. Now is the time to get on board.”

A constant pattern Kaser sees is that the best opportunities exist when they’re quite uncomfortable to most people. It's at these market bottoms—when many are thinking about selling—that value investors step in, he said. This is particularly true in today’s times, Kaser noted.

“The opportunity in value comes with a lot of discomfort in the short-term, but we know this—and we stick to it,” he concluded. “As value investors, we believe you need to grab the opportunities as they’re created.”

Both Dargan and Kaser agree that the pandemic is likely to have a significant impact on both value and growth stocks in the short- and long-term. This is why we at Russell Investments believe it’s crucial in today’s environment to maintain diversified exposures, and to embed opportunities that are expected to pay off over different time horizons.

As both Dargan and Kaser have shared, we think there’s room to add value by identifying high-quality, long-term compounders, as well as by selecting contrarian opportunities where we believe discounted valuations outweigh perceived risks. While none of us could have forecasted 2020 to turn out the way it has, we think that the case for leaning into value has become even more compelling.

Ultimately, regardless of style, we believe that partnering with experienced investors during this time of difficulty is more important than ever. Time-tested investment processes that seek to minimalize the behavioral biases we are all prone to, while steadfastly maintaining focus and discipline, may be paramount to weathering today’s rough seas. We stand ready to assist.

1The 'hire' rating is the highest rating given to investment managers based on Russell Investments manager research process.

2Large capitalization stocks are those with a market capitalization (the total value of its shares outstanding) of more than $10 billion. Trailing P/E takes the current price of a stock and divides it by the earnings per share over the prior 12  months.