How low can you go: Monetary policy constraints and options for the next recession

This is the longest U.S. economic expansion ever. And while expansions don’t die of old age, it’s prudent for investors and central bankers to think now about the potential consequences of the next global recession.

To put it bluntly, the next five years are likely to prove very challenging for monetary policymakers. Slowing demographic trends, lackluster productivity growth and other factors have conspired to depress the level of real interest rates relative to decades past.1 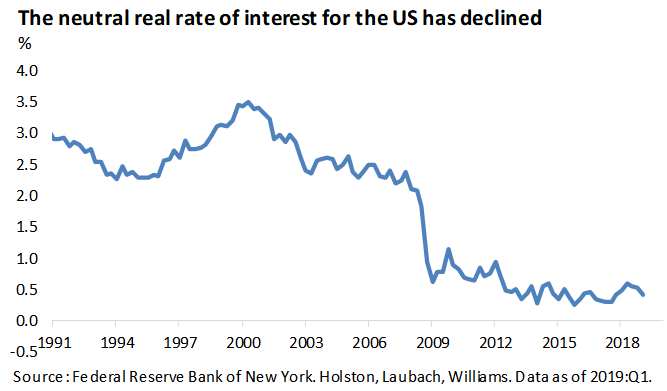 An immediate consequence of secularly lower neutral interest rates is that central banks are more likely to find themselves constrained by the zero-lower bound—which occurs when the short-term nominal interest rate2 is at or near zero—during an economic downturn. For example, if we overlay the policy space that has historically been required by the U.S. Federal Reserve (the Fed) to fight booms and busts, we find the Fed would likely need to cut rates below zero in the next recession to provide a normal degree of policy accommodation. In the chart below, you’ll see that the lower pale blue band of normal policy space is in negative territory. 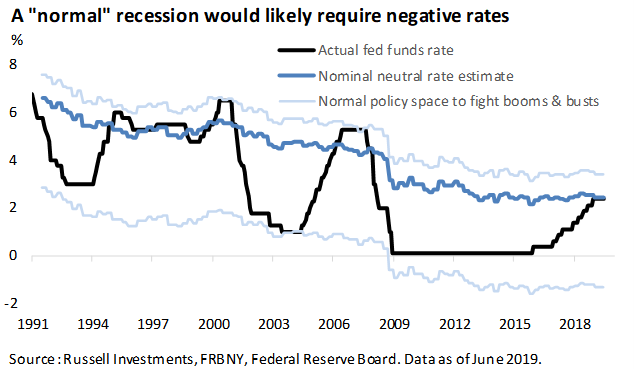 Using more sophisticated econometric techniques, two researchers from the Federal Reserve Board in Washington, D.C.,3 have suggested that the effective lower bound4 on interest rates could bind 40 percent of the time going forward. That’s a big deal. It means that tools like zero interest rates, forward guidance and quantitative easing—often considered an extraordinary response to the Global Financial Crisis—are likely to be the new normal. Furthermore, the challenges of the zero-lower bound suggest that future economic recoveries, all else equal, are likely to be more protracted. And fiscal policy will need to play a larger countercyclical role.

This leaves us with three questions:

In short, the answers are “they’re thinking about it,” “limited” and “big”.

The good news is that we aren’t raising anything in this note that central bank chiefs don’t already know. Vice Chair Richard Clarida is spearheading the Fed’s review of this issue. He’s highlighted three fundamental research questions:

The first research conference on this topic was already held at the Federal Reserve Bank of Chicago on June 4 and 5. And an army of Ph.D. economists across the Federal Reserve System are doing their own homework in parallel to that. The Fed’s conclusions from this review are scheduled to be shared with the public in early 2020. If you’re a glutton for punishment, feel free to comb through the papers and speeches already published on this matter, such as these by former Fed chiefs Ben Bernanke, Janet Yellen and New York Fed President John C. Williams. Our fingers are crossed that central bankers will get this problem sorted out before the next recession hits. And while the Fed faces challenges, the European Central Bank(ECB) and the Bank of Japan(BOJ) are at even greater risk, should they go into the next recession with no scope to meaningfully cut overnight interest rates.

Unconventional monetary policy tools are often misunderstood by the public. The basic idea is that when overnight interest rates have already been cut to zero, a central bank can still provide further accommodation by guiding longer-term interest rates down, too.5

So what unconventional ammo do central bankers have to fight the next recession? As a starting point, we would expect interest rates to be slashed to the effective lower bound across the developed markets. Forward guidance naturally comes next—an explicit commitment to keep interest rates at zero for an extended period of time. After that comes a battery of more extreme tools that either implicitly or explicitly target the longer-end of the yield curve6. Quantitative easing (QE), maturity extension programs (such as Operation Twist) and yield curve control fall into this category.

QE is a central bank’s large-scale asset purchase program. In theory, it can target a range of investment vehicles. But some jurisdictions explicitly forbid purchases of some securities. For example, the US Federal Reserve Act does not allow7 the Fed to purchase corporate bonds or stocks. If you were wondering why the ECB, the BOJ and the Bank of England (BOE) bought corporate bonds and the Fed didn’t, it was largely due to different legal constraints. Of course, with enough time, laws can be changed.

In the table below, we note in red tools that are Illegal under current law. The other characterizations in the table are based on our own assessment of the likelihood of a measure, based on its merits and on public statements from former and current leaders of the respective central banks.

Source: Russell Investments. July 2019.
"Helicopter drop" is a metaphor for unconventional measures to jumpstart an economy, such as an increase in money supply or a tax cut

The above list of recession-fighting options is by no means exhaustive. I handed in my Fed security badge at the Eccles building in the Summer of 2009. A lot has changed since that time, and it’s entirely possible that other experimental methods are being discussed behind the closed doors at the Fed, the ECB or other central banks. But the bottom line is that the extraordinary monetary policy tools that were used to fight the Global Financial Crisis will be required again and should be judged as ordinary in a world of secularly lower interest rates. That means we all need to understand these tools and how they work. Tools like forward guidance and QE were considered the first-best options for delivering stimulus in the aftermath of the GFC, and these are likely to be the first ports of call when conditions sour again. To be clear, though, central banks are very low on ammo. And that means a heavier burden will be placed on fiscal policy in the next economic downturn—the topic of my next note.

1 Economic theory suggests that the neutral real rate of interest (r*) is determined, in part, by the economy’s trend growth rate. Trend growth, in turn, is a function of demographic trends (how many workers you have producing widgets) and productivity trends (how many widgets those workers produce in an hour). For a more detailed exposition see the appendix to this note or “The Future Fortunes of R-star: Are They Really Rising?” by John Williams (2018).

2 Nominal interest rates do not take inflation into account.

4 Lower bound is the lowest level interest rates can fall to. Zero lower bound is when the central bank cuts its benchmark rate to zero. But the effective lower bound may be less than zero.

5 What central bankers actually care about are real interest rates. Thus, they want to ensure that both nominal long-term rates come down AND that inflationary expectations remain anchored.

8 A dot plot is a statistical chart used by the Fed to indicate the expected policy path of the Fed's voting members.