Is the U.S. stock market looking through the recession? History has the answers

The U.S. National Bureau of Economic Research (NBER) declared on June 2, 2020 that the U.S. economy had gone into a recession at the end of February. The end of the previous recession, the Global Financial Crisis, was June of 2009. The period from July of 2009 to February of 2020, 10 years and eight months, is the longest economic expansion on record.

Gross domestic product (GDP) growth in the U.S. for the second quarter of 2020, announced in late July, was -9.3%, or -32.2% annualized—far worse than any past economic decline.

However the U.S. stock market seems to be looking through this economic catastrophe. For the five months and one week since the start of the recession—March through mid–August 7, 2020—the U.S. stock market, as measured by the S&P 500, has returned around 50% and has touched a record high1. There are many factors driving this rally:

That said, the market is volatile in this time of uncertainty and investors could experience periodic downturns on the way to economic recovery.

This apparent contradiction between GDP decline and a rally in the stock market is not new. Looking at the 30 recessions between 1869 and 2018, there have been 16 recessions which had positive stock market returns—as measured from the start to the end of each recession. These positive–market recessions lasted on average 16 months, with stock returns ranging from 38.1% to 0.7%, with an average of +9.8% and an average GDP decline of -3.0%.*

The 14 recessions with negative returns lasted 18 months on average, with an average return of -14.2%. Putting these 14 periods end–to–end would result in a loss of -96.4%. 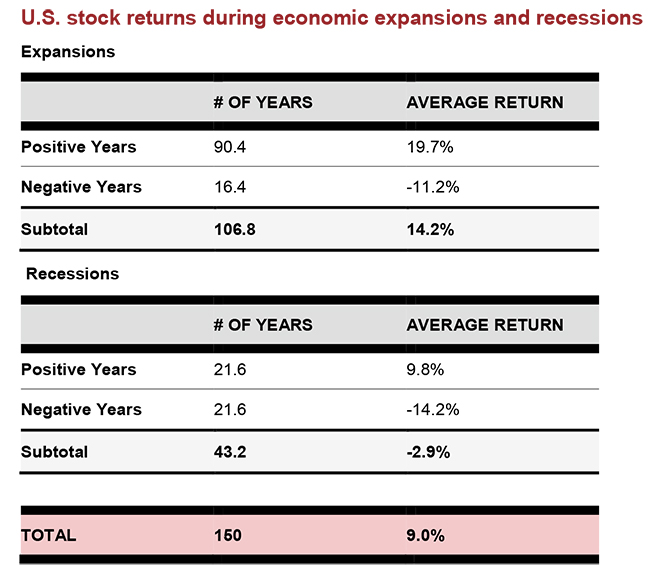 An investor would certainly like to dampen exposure to these drawdowns, but how? In order to beat a buy–and–hold return of 9.0% over the 150–year period, an investor would have to successfully predict 77% of the market turns—and move in and out of stocks/cash as appropriate.

We believe a better way to limit drawdowns in general is to diversify among regions, asset classes, and investment styles. A multi-asset portfolio, which includes exposure to alternatives such as real assets (real estate and infrastructure) can be an efficient way for investors to diversify their holdings.