A large public pension system asked Russell investments to create a more elegant and accommodating portable alpha strategy. The new strategy had to simplify the alpha and beta responsibilities, streamline performance measurement and attribution, reduce the reconciliation challenges with the various managers and consolidate the pools of capital.

Implementing a portable alpha strategy can be a daunting task, especially if the strategy involves multiple managers across various asset classes. This is particularly the case when each manager is responsible for providing both the beta and alpha strategies, and then is asked to segment those strategies into different asset class exposures. The process of aggregating these components to effectively measure the performance impact at the total portfolio level, understandably, can be a complicated undertaking. dissecting the attribution by manager, by objective (alpha vs. beta) and by asset class composite only compounds the exercise. A representation of the original portable alpha program design is shown below in exhibit A.

Investment portfolios often evolve due to the many incremental changes to the structure over time. New managers and asset classes were added to the portable alpha strategy as the client identified new investment opportunities over a decade of such evolution. The end-state developed into something quite different from what might have been built from a clean slate today. While we could have assumed the fragmented program much sooner, we took the opportunity to step back and simplify the structure prior to making the transition. In this case, we were able to collaborate with key constituents to arrive at an efficient solution.

Overview of the enhanced program

1. All overlay positions held in a single custody account

In order to simplify and accurately capture performance with minimal manual intervention, the custodian account was divided into sub-accounts that allowed the client to bucket performance by asset class. This solution required Russell Investments to tag each trade to a relevant sub-account so the client’s performance provider could separate positions by asset class. This accommodation allowed the performance provider to attribute the performance impact of beta exposures from a single account to the corresponding asset class composites. While not all performance providers can create various sleeves for a single account, this reflection was similar to how we account for these exposures on our own investment book of record (IBOR). As a result, the new process required very little manual intervention and flowed very smoothly. This structural shift led to the elimination of eight-plus custodian accounts, and any associated sub-accounts.

"Total return swaps were preferred as a tool for the core position, both to reduce the tracking error volatility and to provide potential cost savings, when compared to rolling futures."

For the beta management component, we took a core/satellite approach in which the larger positions were maintained in total return swaps. Meanwhile, the smaller, incremental needs were supplemented with futures contracts. Total return swaps were preferred as a tool for the core position, both to reduce the tracking error volatility and to provide potential cost savings, when compared to rolling futures. The swaps were also used to gain exposure to more customized and esoteric exposures. The satellite position was maintained in cost-effective, highly liquid, exchange-traded futures contracts.

3. Cash and collateral positions managed in the same custody account

In this case, the client had been pledging Treasury Inflation Protected Securities (TIPS) as collateral to counterparties, in addition to cash. While nominal Treasuries are a more common form of collateral (and more broadly accepted by counterparties), this allowed for modest inflation protection to enhance the cash returns in the program. Just like the various asset classes in the program, cash and collateral holdings were also broken out into an individual sleeve of the main custodial account. 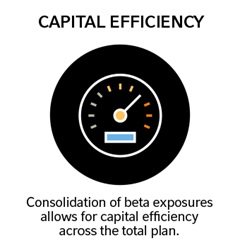 Total return swaps allow for a relatively inexpensive way of gaining unfunded synthetic exposure, allowing for a more efficient use of capital when achieving synthetic positions. In most cases total return swaps do not require initial margin (unlike listed derivatives), although they do require collateralization of the gains and losses. This reduced outlay of cash upfront improves liquidity management, allowing for any remaining cash to be allocated to alpha producing strategies. Capital efficiency can be enhanced even further by utilizing existing physical securities (such as U.S. Treasuries) to meet the collateralization needs resulting from unrealized gains/losses. By consolidating all the beta exposures into one account, the client gained the flexibility of having their collateral pool in one custodian account, thus simplifying their requirement to keep track of exposure ratios and collateral across multiple managers and accounts. Consolidating the overlay trading with Russell Investments allowed for the netting of positions with each counterparty, such that the total number of variation margin or collateral transfers were significantly reduced.

2. Simplification - to reduce administrative burden on client and custodian/performance provider 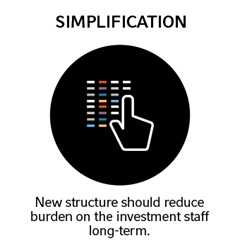 Reducing the number of custodian accounts and investment managers associated with the portable alpha program should alleviate the burden on the client's investment staff over the long-term. The benefits should ideally be realized across multiple facets, including strategy implementation, reconciliation, performance, and trade capture. Reducing the administrative strain on the investment staff frees up time for more important tasks such as manager selection, strategy research and performance analysis. The primary benefit of this new arrangement for the staff was performance measurement efficiency. After several discussions with the custodian, we were able to come to an agreement where each swap trade could be captured and measured in separate sub-custody accounts and tagged to the correct asset class in the client's performance hierarchy. 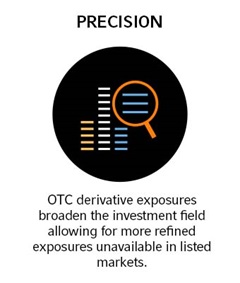 One of the prime benefits of total return swaps is that they allow for a much broader selection of investment choices compared to the listed derivatives market. In this case, swaps were particularly important for the fixed Income strategies because listed futures only capture the Treasury component of a broad index and thus struggle to keep up when credit spreads are tightening, or other extended sectors are outperforming.

While trading in OTC markets does require ISDA documentation, the need for customized exposures sometimes justifies the additional upfront work. In this case, the client was already utilizing Russell Investments' OTC trading platform and umbrella ISDAs, so the onerous part had already been completed with minimal client effort. This pre-existing arrangement allowed the client to leverage the relationships already in place through our pre-negotiated umbrella ISDA, which ultimately shortened the transition period from one structure to another.

The investment and operational needs of each client differ. It's important to customize around those needs as well as around the client's custodian's strengths or limitations. We've found the most effective portable alpha programs are those that allow for clear performance measurement and ongoing oversight by the client's governance structure. This refocused account structure gives the client ongoing flexibility as their portable alpha program changes over time. Any asset class that needs to be added or removed can efficiently be considered within the beta overlay account that was configured. Total return swaps and exchange-traded derivatives are generally cost- and capital-efficient methods for implementing this strategy.