Despite a minority view for a 100-basis-point (bps) rate hike, on Wednesday the U.S. Federal Reserve (Fed) stuck with the consensus and delivered its third straight 75-bps rate hike instead, raising the federal funds target rate to 3.0% to 3.25%—the highest since 2008—and signaling more super-sized hikes ahead.

The target rate is now in restrictive territory, rising above the Fed's estimated neutral rate of 2.5% The higher the target rate drifts above neutral, the more restrictive it becomes to the economy. In other words, the target rate is now at a level intended to limit the economy. This is likely the central bank’s intention—to slow the economy enough to cool the labor market and, in turn, bring down inflation. Based on the Fed's updated economic projections, the growth outlook is for a weaker economy over its projection horizon versus its June update. However, for a central bank committed to bringing inflation back to the 2% target, the September projections indicate that it isn't likely to occur until 2025. This, in turn, keeps the pressure on the Fed. 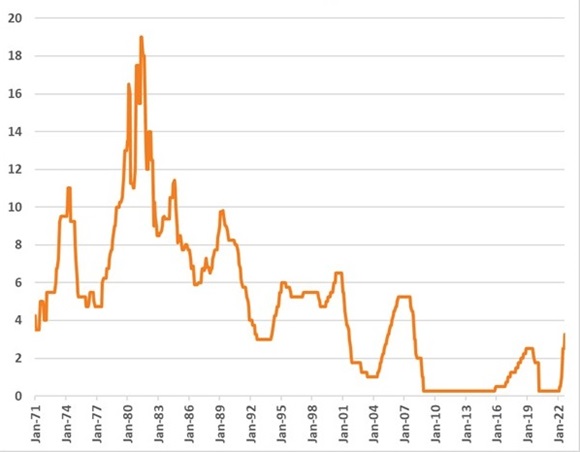 The troubling bit is that the most rate-sensitive sectors of the economy are already showing signs of stress. For instance, the 30-year mortgage rate has doubled from year-ago levels, contributing to mortgage applications tumbling by about 56% since the start of the year. However, despite driving rates into the danger zone, the Fed doesn't seem ready to make a U-turn. FOMC (Federal Open Market Committee) officials remains troubled by a strong labor market placing upward pressure on wages and inflation.

In the press conference following the FOMC meeting, Chairman Jerome Powell mentioned that there is "only modest evidence" that the labor market is cooling off. In other words, the Fed likely won’t consider the job done until the labor market slows enough to bring down core inflation within striking distance of its 2% target. The August CPI (consumer price index) report was a step in the wrong direction, with core inflation rising to 6.3% from 5.9%—too distant from its target level.

We take the chairman at his word and do not expect a policy reversal to occur as quickly as markets may be anticipating unless core inflation sufficiently declines to the point that the Fed no longer considers inflation expectations at risk of becoming unanchored. That said, we are concerned with the speed at which rates are rising. The Fed has cumulatively raised rates by 300 bps in about seven months, and is forecasting another 150 bps in rate increases, making this the most aggressive rate hiking cycle since the 1980s. Importantly, we know policy works with a lag, and inflation is a lagging indicator. And, as previously discussed, the most interest-rate sensitive parts of the economy, like housing, are flashing a warning signal. Ultimately, there is a clear risk that the Fed becomes too restrictive and stays there for too long—especially if it waits for confirming signals from a lagging indicator.