Investor interest and participation in private markets continues to grow. Indeed, investors continue to increase exposure to private markets, including private equity and private credit, at the expense of their public market equity and fixed income allocations. In fact, CEM Benchmarking noted there was an average allocation to private markets of 18.5% in 2020, which represents an increase of nearly 5% since 2012.¹ So, what is driving this investor behavior?

Beyond performance, however, we believe there are also several other critical reasons why investors are attracted to private markets. In this article, we'll outline these reasons and highlight—from a total portfolio perspective—what we believe you are missing out on by not participating in private markets investments. And we'll share data that shows which types of investors are underexposed to this vital sector.

Today, private markets are a widely accepted part of an investor's strategic asset allocation. Perhaps one of the most important reasons why this is the case is that the investable opportunity set is significantly greater than what is available in the public sphere. Moreover, investors may be surprised to learn just how big the difference is. For example, today there are more than 95,000 private companies globally that have annual revenues over $100 million, versus approximately 10,000 public companies with the same revenues.3 By this metric, and as the chart below shows, the investable universe of private companies is some 850% bigger than the public markets. Given the sheer magnitude of the difference, we believe it is too large for investors to ignore. 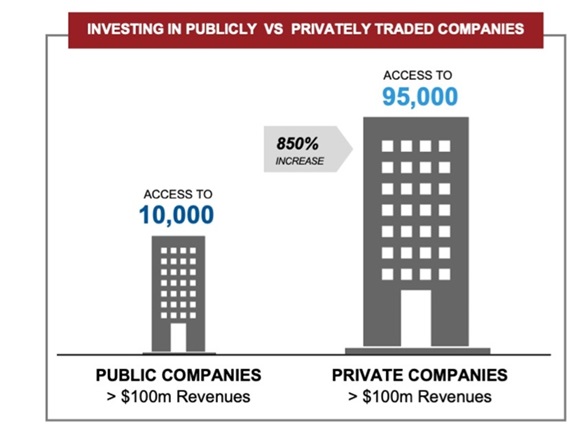 All the while, against this backdrop of a shrinking universe of public traded companies, indexes that investors literally have trillions of dollars benchmarked against are becoming increasingly concentrated. For example, 30% of the S&P 500's total market capitalization was held in the 10 largest stocks in the index at the end of 2021.⁵ This creates significant concentration risk. Private markets can help. The opportunity cost of not investing in private markets is too big to ignore, as investors are not as diversified as they think they are by solely investing in public equities.

Within the total portfolio context, we believe there is a compelling case for exposure to private markets. In addition to exposure to key technological trends and innovation, there are also some additional market structural dynamics that may be attractive for investors.

First, consider that companies are staying private for longer. In previous decades, venture-backed companies tended to go public earlier in their lifecycle. For example, Amazon went public in 1997 when it was three years old. At the time of Google's IPO (initial public offering) in 2004, it was six years old.⁶

Today, however, the market dynamics are quite different as companies rely more and more on the private markets for their growth and are electing to stay private for longer periods of time. For example, Uber and Airbnb, two of the 10 largest-ever technology IPOs, were 10 and 12 years old, respectively, before going public—long after they had disrupted the industries in which they operate.⁷ Moreover, while private companies valued at over $1 billion (also known as unicorns) were virtually non-existent a decade ago, today there are approximately 1,000 companies with billion-dollar valuations across a range of sectors, including internet software and security, hardware, artificial intelligence, fintech, healthcare and e-commerce. In aggregate, these companies are worth approximately $3.3 trillion.⁸

Given that companies are staying private longer and their valuations are much higher than has been the case historically, the implication for investors is that by not participating in private markets, they risk forgoing exposure to high-growth companies, disruptive technology and the potential for high returns. The bottom line: From our vantage point, gaining exposure to privately owned companies prior to their IPOs is more important than it has ever been. At the same time, balancing that exposure with a holistic, public-and-private approach is key to managing both long-term and short-term risk.

The private assets' license for action

When compared to public company boards, the boards of private equity portfolio companies have a greater tendency to take a co-leadership role with the CEO on critical issues such as strategy and the performance of the business. This heightened level of engagement is effectively a license for action, facilitating the impetus and freedom to make decisions and implement changes that are focused on creating value over the medium- to long-term.⁹ Another contributing factor is the concentrated ownership structure of private-equity-owned companies—with an engaged board, key decisions can be voted on quickly without the need to convince a wide range of different shareholders with diverse interests.

In addition, public companies have many shareholders and stakeholders with diverse interests that are dependent on their relationship with the company. This dynamic has the potential for conflict—such as in merger and acquisitions negotiations—thereby distorting decision-making processes. In contrast, within private-equity-owned companies, there is clear alignment between company owners and company management that is focused on creating and maximizing value. This clarity of mission and alignment of interests is supportive of the company's success over the long-term.

A recently released McKinsey report showed that, despite the growth of private markets allocation, there is still room for more. The report states: " ...private equity targets for private- and public-sector pensions tend to be in the range of 7 to 8 percent of assets. These relatively mature pools are roughly half to one and a half percentage points below target." 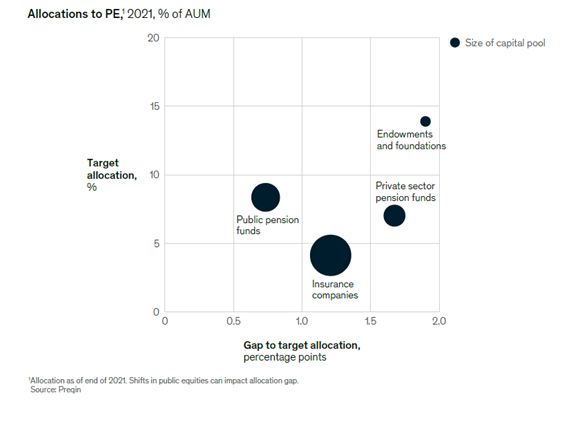 At the same time, we believe it is vital that increasing that exposure happens within a total portfolio context. While private markets have obvious performance appeal, their complexity requires a holistic view, using other portfolio sectors to balance illiquidity, unintended overlaps and other risks.

Ultimately, it's not surprising that investors are actively seeking to increase their allocations to private markets. But there is clearly room for more exposure to this space. The bottom line is that through the lens of a total-portfolio perspective, we believe the opportunity cost of not investing in private markets is too great to ignore. From the significantly larger investable opportunity set, to value creation and the license for action that privately owned company boards and management teams possess, it's clear that private markets can play a key role in helping investors achieve their desired outcomes.

⁵ The Balance, A Handful of Stocks Increasingly Dominates the S&P 500, January 2022 https://www.thebalance.com/handful-of-stocks-increasingly-dominate-sp500-5214791