Fed doubles down on fight against inflation with 0.75% rate hike

For the first time since 1994, the U.S. Federal Reserve (Fed) raised the federal funds rate by 0.75 percentage points to an effective range of 1.50% to 1.75%—conveying its seriousness about tackling inflation and inflation expectations. The Fed's move wasn't entirely surprising, after markets were tipped off by a Wall Street Journal story late Monday indicating that a 75 basis-point (bps) hike was likely. This may explain today's equity rally, which gained strength after the start of Chairman Jerome Powell's press conference.

So, what changed in the latest Fed outlook, when compared to projections made earlier in the year? Let’s unpack it all, starting with inflation.

The Fed revised its 2022 headline and core PCE (personal consumption expenditures) inflation expectations to 5.2% from 4.3%, and to 4.3% from 4.1%, as compared to March, and expects inflation to stay above its 2% target over the projection horizon (through 2023). Ultimately, stronger inflation and rising consumer expectations for inflation have forced the Fed's hand. 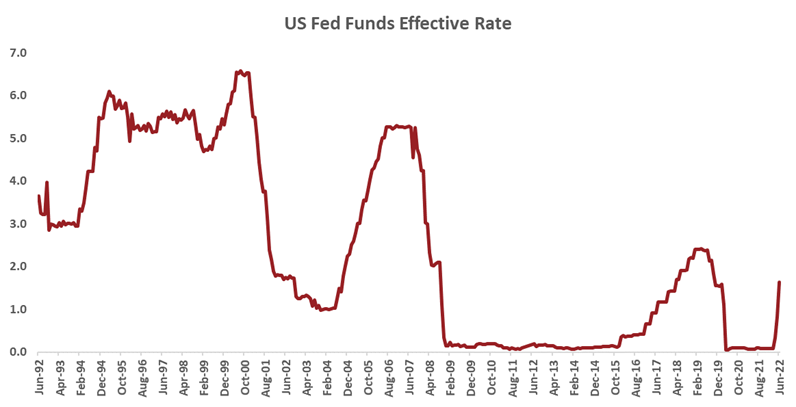 At the press conference, Chairman Powell commented that by the end of 2022, the central bank intends to raise its policy rate to a modestly restrictive level, which it believes is between 3.0% and 3.5%— effectively what the dot plots revealed. The Fed expects the federal funds rate to reach 3.375% in 2022 and 3.75% in 2023, implying an additional 175-bps tightening in the remaining four meetings this year. This means that further super-sized rate hikes are forthcoming. Indeed, Powell commented that 75-bps hikes are atypically large, but hinted toward either a 50-bps or 75-bps move at the July meeting.

As policy rates shift from accommodative to restrictive, the Fed expects softer economic growth and higher unemployment relative to its March projections. Gross domestic product (GDP) growth in 2022 and 2023 was downgraded to 1.7%, below prior forecasts of 2.8% and 2.2%, respectively, and the unemployment rate is expected to rise by 0.2% and 0.4% in 2022 and 2023, to 3.7% and 3.9%.

Crucially, the Fed's updated economic projections suggest a soft(ish) landing of the economy. While growth is expected to slow and the unemployment rate is predicted to edge slightly higher, there is no recession through its projection horizon. This conflicts with how market pricing is evolving and what leading indicators predict.

For instance, a widely followed segment of the yield curve—the spread between the 10-year and 2-year U.S. Treasury yield—briefly inverted this week. It had also done so momentarily in April. Historically, the yield curve has been a prescient recession predictor. Moreover, swap markets are pricing that the target rate will peak near 4% around May 2023, and penciling in a declining rate path after that. This is above the level at which the Fed expects its policy rate to peak, and roughly 150 bps above the central bank’s estimated neutral rate. In other words, markets have priced a more aggressive rate path than the Fed for the next 12 months and a downward sloping Fed rate beyond then. Therefore, while current economic conditions are healthy and underpinned by a tight labor market, financial conditions are tightening, and recession concerns are growing for the second half of 2023.

2023 recession risks are rising. How much of this is already priced in by markets?

While talk of a recession is alarming, it's a necessary evil to reset the system, so to speak, by bringing inflation and an overheating economy back under control. And the glass-half-full view is that if the U.S. economy is headed toward a recession, then a good portion of that outlook may already be priced in.

Consider, for instance, that the average recession drawdown is about 35%, and that the S&P 500 Index is already in bear-market territory, having fallen over 20% since its Jan. 3 high. In other words, the current pullback in equities is advanced. That said, equity bear markets never feel comfortable, and volatility will likely persist until the Fed is convinced that inflation is sustainably trending down and, therefore, its policy stance can pivot.

For today’s investors, it’s worth looking back a year or two, to the pandemic drawdown and subsequent rally, for a reminder of the dangers of trying to time market entry and exit points. Going forward, we believe maintaining investment discipline—by staying invested and sticking to your plan—will be of crucial importance.