In short, we believe a recession appears in store for the U.S. by the end of 2020–and possibly sooner. Why? The recent slide in U.S. equities–the S&P 500® Index dropped nearly 14% last quarter1–suggests that the bull market likely peaked early last fall. In the post-World War II era, markets have reached their high point, on average, roughly six months before a recession–and the longest distance from a market peak to a recession has been 12 months (although the 1987 bear market was outside of a recession). 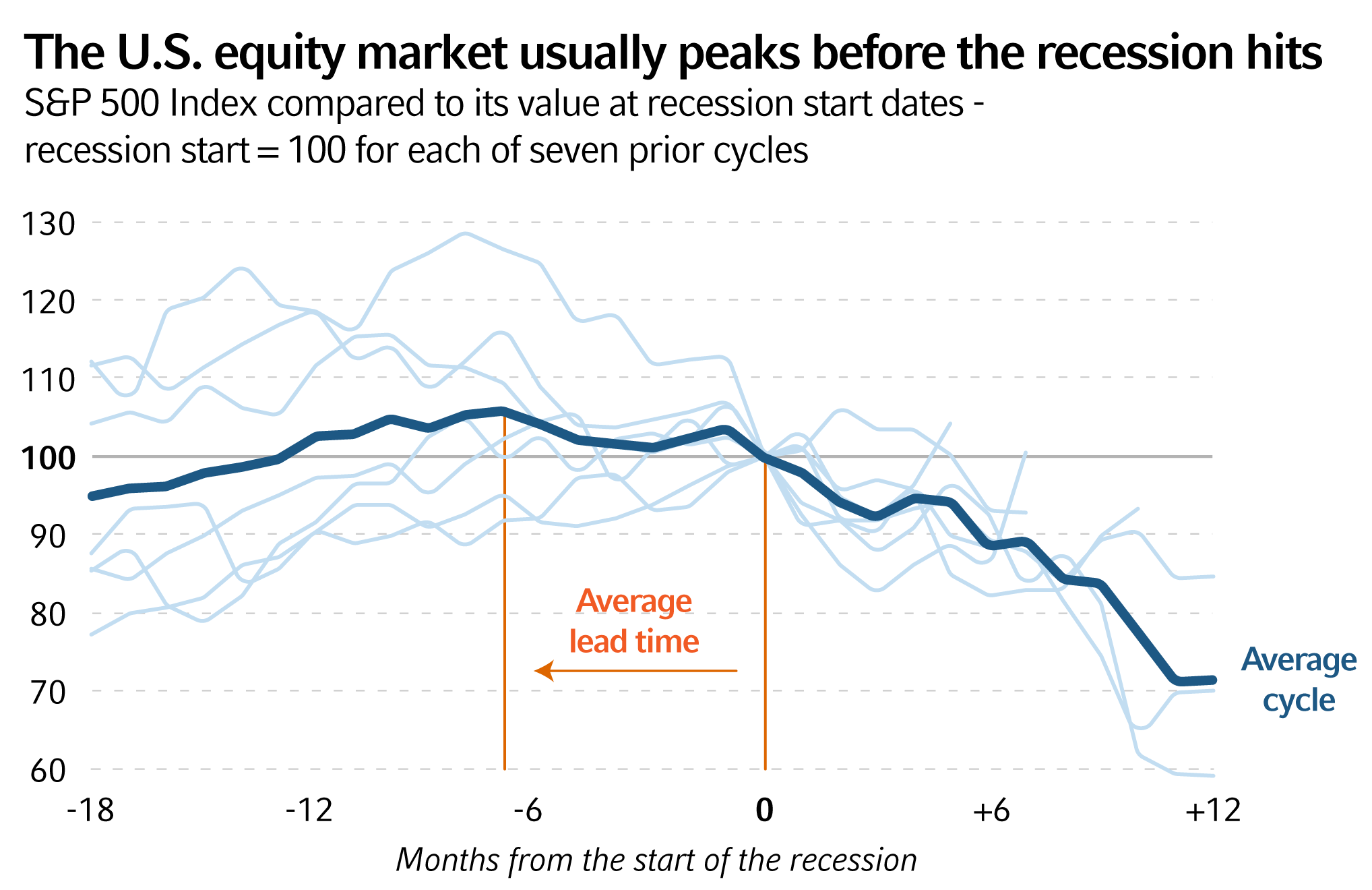 While it's impossible to nail down the precise timing of the next economic slump, absent a crystal ball, there's little doubt in our minds that the economy will experience at least two consecutive quarters of declining gross domestic product (GDP) growth–the definition of a recession–by the end of 2020. Although the calendar alone does not drive recessionary risk, this economic cycle has lasted a very long time: If the nation's economy is still churning in August, the current period of U.S. expansion that began in June 2009 will officially become the longest on record–surpassing the 120-month stretch of growth from March 1991 to March 2001.2 Put another way, never before in the history of the U.S. will a recession have been avoided for such a length of time. During this time, economic imbalances have built up–as they always do–and these areas of unsustainable economic activity will, in our mind, end in recession. But, will the next U.S. recession be as severe as the last?

What's more, the Great Recession was consumer-driven, sparked by record levels of debt. Consumer-led recessions, in particular, tend to be extraordinarily painful. Why? Because as personal debt levels rise, people are forced to use income to pay down debt. This, in turn, leads to a sharp reduction in consumer spending–a real problem in the U.S., where consumer spending accounts for roughly 70% of the economy.3

10 years removed from the Great Recession, the picture today looks much brighter. For starters, the American consumer is in far better shape than a decade ago–ironically because of the Great Recession. In its aftermath, debt-burdened consumers were forced to massively alter their spending habits, and they did. In general, this has led to a much more financially-responsible consumer–one who generally has focused on paying off debt, rather than borrowing additional money. Broadly speaking, today's consumer is not over-leveraged–in stark contrast to 2008.

The same holds true for U.S. banks. It's no secret that over-leveraged financial institutions leading up to the GFC played a large part in the nightmare of 2008. Fortunately, banks today are on much more solid footing, with capital ratios drastically improved in the 10 years since.4

All things considered, the parallels between today's economic backdrop and 2008 look to be few and far between. In order to gain a more accurate portrayal of how we think the next recession will unfold, let's travel back in time a bit further. Back to the halcyon days of the late 1990s–the peak of the dot-com era.

As the clock ticked toward Jan. 1, 2000–remember Y2K?–America was flying high. The U.S. economy, powered by the rise of a booming tech sector and the explosion in popularity of the internet–was soaring to new heights. Annual GDP growth rates from 1997-1999 had exceeded 4%.5 The unemployment rate had tumbled from 7% at the start of the decade to approximately 4% by 1999–the lowest for the nation since the late 1960s.6

Not surprisingly, the stock market had also gone fully stratospheric, with the Dow Jones Industrial Average tripling in value by the end of the decade–rising from 5,000 points in the early 90s to roughly 16,000 by the time Y2K arrived.7 The NASDAQ Composite® Index charted a similarly meteoric path, closing out 1999 at over 4,000 points–a four-fold increase in value in less than five years.8 The late 90s represented the icing on the cake of a historic bull market–one that began in October of 1990 and grew into the nation's longest on record (at the time) by the summer of 1998.

This, of course, sent stock valuations through the roof, with Robert Shiller's cyclically adjusted price-to-earnings (CAPE) ratio hitting an all-time high of 44.20 in December 1999–a mark which still stands to this day.9 In fact, for nearly two years centered around the turn of the century, the CAPE ratio for U.S. equities stood above 40. Contrast that with today's stocks, which we believe are still expensive, and yet have never exceeded a value of 33 (reached in January 2018). This just goes to show that the equity market of the late 1990s was more than expensive. It was historically expensive.

And yet, just three months after the calendar flipped to the year 2000, a bear market was underway in the U.S.–with a recession arriving the following year.

Someone (apparently it was not Mark Twain) once said that although history may not repeat itself, it often rhymes. To wit, it's hard not to note the plethora of eerie parallels between the dot-com era and today. Recent GDP growth, punctuated by a 4.2% year-over-year increase in the second quarter of 2018, has been stellar. Unemployment rates have been nothing short of spectacular, plummeting to levels below those observed in the late 90s and matching 1969's mark of just 3.7%.10 As for the country's seemingly never-ending bull market? Last August, it topped the previous record of 3,452 days set in the 90s, and, despite a Christmas Eve scare, is now closing in on 3,600 days11. Just like back then, the tech sector has powered the steady gains. And, don't forget about the length of the U.S. economic expansion, on track to take down yet another dot-com era record in a few months.

While this doesn't necessarily mean today's bull market is going to crumple dot-com style in the next few months, we strongly believe that the better days for U.S. equity investors are solidly in the rearview mirror for a long while. After all, U.S. stocks have outperformed all international developed stocks and emerging markets equities for the past one-year, three-year, five-year and 10-year periods. Zooming out to a wider timeframe, history tells us this won't last. During the nearly 40-year period from 1970-2007, for example, U.S. markets and non-U.S. developed markets had an almost identical performance, with the U.S. charting a 11.06% gain, compared to 10.86% on the part of non-U.S. developed markets.12 In other words, looking at today's bull market in the context of a greater time horizon strongly argues that what's in store for the future of the U.S. stock market is a reversion to the mean. It probably goes without saying that this is very close to how the story played out in the early 2000s. Following a remarkable run where U.S. equities outperformed all other asset classes seven out of 10 years in the period from 1991-2000, the script reversed, with non-U.S. markets beating U.S. markets seven out of 10 times from 2001-2010.13

The parallels between today's economic backdrop and that of the late 90s lead us to predict that the next U.S. recession will taste a lot like 2001. Fortunately, that's about the best type of bad news there is. Why? In a nutshell, the U.S. recession of 2001 was very mild–and also lasted only eight months. That's just two months longer than the minimum requirement needed for an economic downturn to be officially classified as a recession.

So, will the next recession play out in much the same fashion, fading in less than a year's time? What impacts are possible on Main Street–is daily life for most at any risk of serious disruption? And, how about life on Wall Street–just how bad could the next market pullback be? How much pain may lie ahead for investors?