Why U.S. rates are only likely to rise modestly in 2021

Effective vaccines, historic fiscal stimulus, Democratic Party control of the legislature, even more stimulus, reopening economies, 6% U.S. real GDP (gross domestic product) growth, 25% U.S. EPS (earnings per share) growth, and maybe even an infrastructure plan sprinkled on top. On the surface that sounds like the perfect recipe for a bond market massacre. But levels matter A LOT for interest rates (I’ll explain). And U.S. Federal Reserve (the Fed) Chairman Jay Powell still has a very heavy hand to play in Treasury markets before a complete recovery is achieved.

The Fed is likely to keep overnight interest rates at zero this year. Millions of Americans remain out of work, inflation is below target and the Fed wants to engineer an inflation overshoot before liftoff. Our best guess is it will be early 2024 before all of these boxes for liftoff are checked.

Longer-term interest rates are, well, more interesting. That is because their pricing hinges on not only what the Fed is expected to do this year, but several years into the future as well. Our central forecast for the U.S. 10-Year Treasury yield is between 1.1% and 1.6% at the end of 2021. That would only represent a modest lift in yields from current levels. Critical to this outcome is when inflationary pressures are likely to threaten on a sustained basis and, relatedly, how long the Fed intervenes in financial markets with their US$120 billion per month of Treasury and mortgage-backed securities (MBS) purchases (quantitative easing).

There are a lot of misconceptions about what actually causes inflation. Many of us learned about the hyperinflations of the Weimar Republic or Zimbabwe in our economics programs and therefore think money printing causes runaway inflation and currency debasement. Being an economist, I am the proud owner of a 100-trillion Zimbabwean dollar note, which is probably evidence enough that your professors weren’t totally wrong. But the reality of how inflation actually works is just a little bit more complicated.

Inflation is really just a way of balancing supply and demand. If you tried to buy your child a PlayStation 5 for Christmas, you might’ve needed to shelve out multiples of the MSRP (manufacturer’s suggested retail price) to secure a unit on eBay, because there was just way too much demand relative to the available supply of consoles from Sony. That’s an example of inflation at a micro level. At a macro level, economists look for evidence that aggregate demand has pushed beyond the economy’s productive capacity (supply). Aggregate demand is a function of consumer, business and government spending (basically GDP). Aggregate supply is a function of the number and quality of people and machines to meet that demand. The chart below plots the output gap—a summary measure that compares current demand to potential supply. 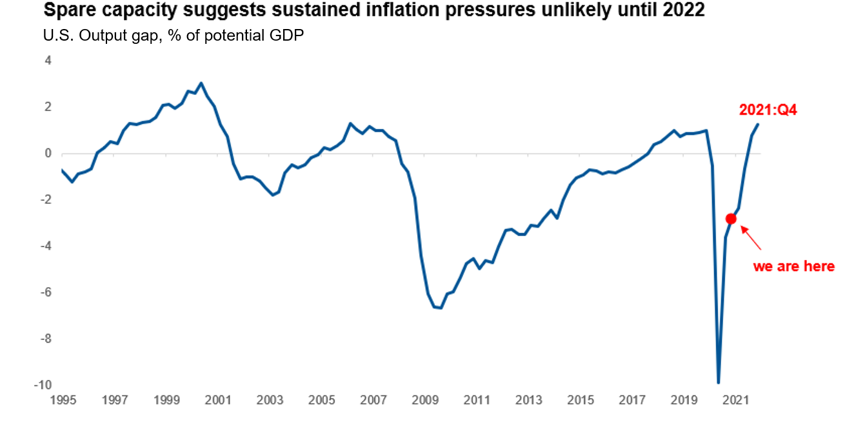 Source: Historical output gap estimates are taken as an average of the Federal Reserve Board and Congressional Budget Office estimates. Russell Investments forecasts and predicted on an assumption of 1.7% potential real GDP growth.
As of February 15, 1995 - November 15, 2021 (forecast)

When the line is above zero, inflationary pressures are building. When the line is below zero, disinflationary pressures dominate. And so the reason U.S. inflation rates were slowing in early 2020 or early 2009—when Fed chairs rolled out the printing press and the U.S. Congress passed stimulus measures—was very simply a shortfall of aggregate demand. A lot of economists got this simple idea very wrong.

The bottom line: Persistent rise in U.S. inflation unlikely until next year

Today, even with historic stimulus and a partial economic recovery underway, aggregate demand (particularly for services) remains weak in the U.S. The very strong growth that we expect in 2021 should help us climb out of this hole much faster than the post-GFC (Global Financial Crisis) experience. It’s worth noting that a short-term spike in inflation is possible later this year, as more COVID-19 restrictions are rolled back and pent-up consumer demand is unleashed. Chair Powell said as much at last week’s Fed policy meeting, stressing that any rapid bursts in inflation will be transient—and not long-lasting. We agree, and believe that sustained inflationary pressures are unlikely until 2022 at the earliest. 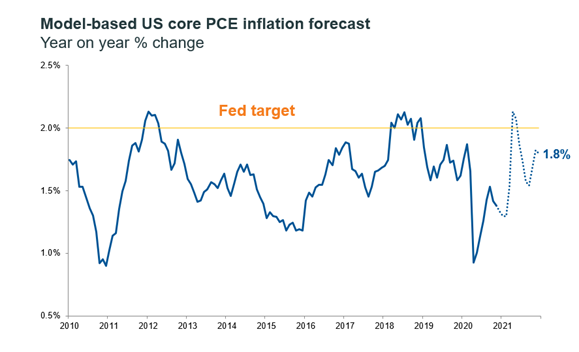 Source: BEA, Russell Investments model-based estimate as of December 2020. The above is a vector auto regression model that predicts core PCE inflation based on its own lags (inflation persistence), labor market slack (U6 gap), broad USD (currency impacts on imported inflation), oil (passthrough into core components like airfare), and expectations (inflation anchoring). The sample period for the coefficient estimation is 1989-2017.
As of January 15, 2010 – December 15, 2021 (forecast)

1.8% is below the Fed’s target. And inflation has been below target for the better part of the last decade. The Fed’s average inflation targeting framework is trying to engineer the opposite—an inflation overshoot—which should mean very accommodative policy for a lot longer.