Risks in China are growing, but manageable

2021 has been quite an eventful year in China, marked by the 100th anniversary of the Chinese Communist Party, increasing regulation of several sectors and, more recently, an increasing amount of stress in the property sector. What does this spell for China’s economy in 2022? And how could it impact the global economic outlook in the year ahead?

Let’s start with this year’s wave of regulatory reform. The Chinese government has taken a stricter stance on some of the large consumer tech names, the education sector (virtually turning those companies into some form of not-for-profit) and some of the Macau gaming names. Predicting future regulation changes is an exercise fraught with difficulty, but we do know that the government is very focused on the cost of living for families. Amid this backdrop, we believe there is the potential for further regulatory action toward sectors that are linked to these issues, such as healthcare.

It’s also worth noting that some of the major companies that have been impacted by this year’s spate of policy initiatives are still down 40-50% from the beginning of 2021, demonstrating that regulatory uncertainty continues to linger—and reflecting the fact that some of the measures undertaken will begin to impact corporate earnings next year.

First, some background. The real estate market is a very important part of the Chinese economy, but property developers have historically had very high levels of leverage. In response to the risks posed by this high leverage, the Chinese government last year introduced the three red lines policy, essentially forcing developers to improve their balance sheets.

This has started to create some pressure on the developers, with Evergrande—the largest and most well-known of the developers—missing a few bond payments. Several other developers (including Kaisa and Fantasia) have now missed payments and are warning about their ability to meet future payments.

As of this writing, the risks seem to be ring-fenced around the property sector, as we aren’t seeing many signs of contagion leaking through to other parts of the economy or, for that matter, outside of China. Some of the key metrics for tracking the risks are the U.S. dollar-denominated high yield and investment grade bond indices. The offshore high yield market is largely comprised of property developers (they make up roughly 80% of the index), and spreads have skyrocketed on the increasing probability of defaults. The investment grade index is more evenly spread across sectors, and while we see a bit of pressure here, it’s largely been driven by the property firms that are investment grade issuers. We have also seen a pickup in the cost of credit default swaps on some of the major Chinese banks, but not at levels that would reflect heightened stress. 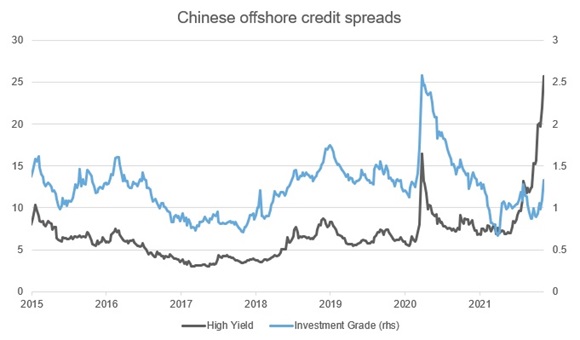 While we aren’t seeing many signs of financial contagion (or China’s Lehman Brothers moment, as some commentators have attempted to describe it), this deleveraging campaign is going to be a headwind on Chinese economic growth over the next twelve months. We do expect there will be some stimulus measures, but likely not enough to offset the full drag. As a result, we have downgraded our expectations for the Chinese economy in 2022, and we have recently seen several other economists do the same thing.

The lack of stimulus measures so far begs the question as to whether we are seeing the Chinese government choosing to break from the growth model that it has adopted over the last 10 years, i.e., the capital-intensive model. We think the government is trying to change direction but is maintaining the option of reversing course. President Xi Jinping has spent a lot of time talking about quality growth and the link to common prosperity, which suggests leaders are willing to take a hard pivot. But there are also several important political moments in 2022 that demand social stability— namely, the Winter Olympics and the National Party Congress. In our view, this means that government authorities have a large incentive to ensure that the Chinese economy maintains reasonable growth through 2022.

What does this mean for the global economy?

A slowing in Chinese economic growth will naturally pose some level of a drag through parts of emerging Asia, as well as Japan and Europe. However, we believe that recent political developments in Europe and Japan will likely provide some offset, as both countries move toward more active fiscal policy.

Should investors be worried?

We believe that a larger-than-expected slowdown in the Chinese economy is one of the key risks for 2022, and we continue to monitor the developments closely. This risk is also highly cited in the U.S. Federal Reserve’s Financial Stability Report as one of the potential shocks that could impact the economy over the next 12 to 18 months. That said, our base case scenario of a slowdown in Chinese economic growth would not, in our view, lead to serious repercussions for the global economy, given the momentum that most developed economies have had following the broader reopening.