Is the SPAC party over?

What happened? Is the SPAC market dead? Should investors flee the space or is it a good time to buy in?

After a spectacular rise in the latter part of 2020, special purpose acquisition companies (SPACs) abruptly retraced in the first quarter of 2021. Since the IPOX® SPAC Index peaked on Feb. 17, it has lost over 25% of its value while the Russell 2000® Index is down around -2%. 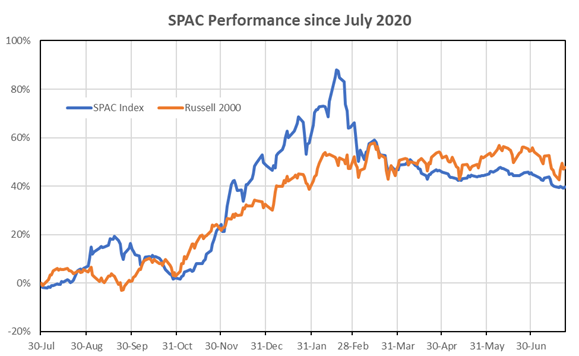 The SPAC market went on a tear at the end of last year. Investors saw SPACs as an opportunity to participate in exciting and potentially lucrative industries and technologies (e.g., electric vehicles), while the SPAC structure offered some reassurance by providing a theoretical downside floor for their investment.

We certainly think there was a level of FOMO (fear of missing out) behavior from investors at play here—i.e., Gee, I missed out on Tesla, maybe Lucid Motors will be the electric vehicle GM to Tesla’s Ford. In addition, many of these technologies also tick the box for investors looking for ESG-compliant investments.

We also have experienced a period of plenty of speculative buying across the financial markets, such as retail investors investing in meme-mania stocks via platforms such as Robinhood that have driven some wild stock price gyrations. The SPAC market provided another avenue for speculative money to find the next unicorn company. Notably, BofA Research identified that retail investors in the SPAC universe accounted for twice the trading volume, compared to the S&P 500 and Russell 2000 stocks, during the second half of 2020.

All these dynamics contributed to a robust demand for SPACs. And sponsors were more than happy to provide supply. While these structures are appealing for management of private companies to take their firm public, they also offer a highly lucrative return for the sponsor, who is able to reap a significant allocation of equity from a successful IPO as part of their promote. Inevitably, this led to a surge in new issuance of SPAC units in the first quarter of this year, and a glut of capital coming to market that has a finite window (~24 months) to identify and execute a successful acquisition.

What drove the selloff in Q1?

Two predominant factors can explain a lot of the selloff.

This selloff led to a significant collapse in the level of new supply. The issuance trend continued into March, but concurrent with the selloff in the sector, the amount of new SPACs coming to market dried up significantly. Compared to the $160 billion of closed and filed capital that came to market in Q1, only a further $20 billion came in Q2. 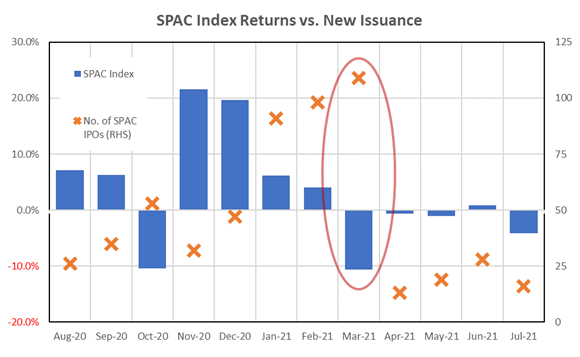 Like any market that goes on a euphoric run, there is an inevitable, and necessary pullback. We have seen this occur in the SPAC market this year, which has led to some pain for investors who bought at over-inflated levels, but in reality, since last summer, the SPAC index is up commensurate with other equity indices like the S&P 500 and Russell 2000 (albeit with greater volatility).

Is the SPAC market going away?

We don’t believe so. SPACs continue to offer a number of advantages for investors, sponsors and private companies alike. But there are some watchpoints as well.

Ideally, like any good financial deal, a SPAC transaction should be economically beneficial to all parties. However, the balance for terms between sponsors and investors has oscillated with the IPO environment. Given the amount of supply that came to market and the number of sponsors competing for investor dollars, the balance of negotiating power and beneficiary of SPAC terms have tilted back in favor of investors. While the highest quality sponsors can still issue with fairly aggressive deal terms, the majority of new IPOs seen sponsors make some concessions to attract investor capital. This has included:

Although new issuance has slowed, there is still a significant amount of capital searching for business acquisitions. As of this writing, there are still over 400 SPACs in the U.S., with more than $120 billion in cash looking for deals. 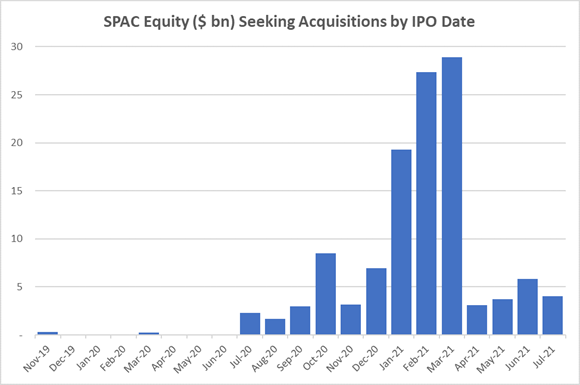 This means sponsors are competing with large amounts of capital from other SPACs, along with other sources including private equity and traditional IPOs, for attractive target companies. This is coupled with a finite window to execute on a deal (Q1 2023 is a critical deadline).

The regulatory environment continues to evolve. Sponsors have already begun to navigate certain requirements such as changes to accounting treatments. However, further obligations are possible, if not probable. For now Congress has punted oversight to the SEC, which is a positive, as the latter is more likely to take a pragmatic approach to regulation. However, the SEC has identified key areas of concern, such as the ability of sponsors to make forward-looking projections, which they may require to fall into line with the more stringent requirements of traditional IPOs. Furthermore, the SEC has already begun enforcement actions against sponsors that have exaggerated the future potential of business acquisitions.

Currently there are over 100 active lawsuits against sponsors as claimants seek resolution for a variety of alleged failures, including transparency, conflicts of interest and mismanagement.

Given the competition, getting deals done will be harder for sponsors. Investors will be more discerning and more likely to redeem their shares for cash, rather than participate in the merger, especially for acquisitions that look overvalued. This will require sponsors to seek other forms of financing, e.g., PIPEs (private investment in public equity), to get the deal done. Sponsors will need to provide additional common stock,  preferred equity or convertible notes to fund the acquisition. This adds an additional layer of complexity and uncertainty to consummate deals.

Investors continue to benefit from downside protection via the trust structure, while retaining optionality by voting on the deal and retaining warrants regardless of whether they redeem their units for cash or not. Of active SPACs currently seeking a target, the average premium to the trust floor is around 0.80%, and in more recent deals, SPACs can be picked up at a discount to the implied floor price. 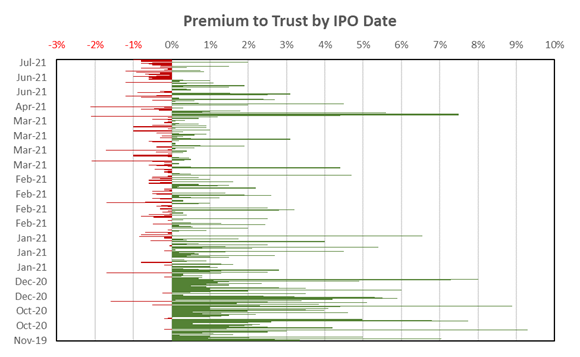 Although SPACs provide protection through the trust, investors can incur the opportunity cost of earning minimal yields from short-term Treasury collateral in the trust for up to two years if the sponsor fails to find a suitable acquisition. Historically the average time horizon from IPO to merger has been 12 to 18 months. More recently, this has fallen to around six months. However, with the significant amount of capital currently chasing deals, the risk of sponsors taking longer to find a suitable target has increased, and with it longer durations, higher opportunity costs and lower IRRs for investors.

Investors need to do their homework on the sponsor to find reputable and experienced management who have a high probability of deal success. Sponsor compensation from the promote can be especially lucrative when a deal is completed. This is all well and good (and at least somewhat justifiable) if it is a successful merger and the de-SPAC’d company proves successful. However, if a sponsor is close to the end of the investment window, they risk losing not only the potential equity upside, but also their sunk costs and expenses, if they fail to secure a deal. This can lead to the sponsor executing on deals with poor prospects to avoid those losses, but to the detriment of the SPAC’s equity investors. In addition, sponsors who have multiple SPACs in the market may also execute on low-quality deals in order to move onto their next deal. In fact, a number of lawsuits have already been launched against sponsors for these reasons.

There is a large amount of SPAC capital currently looking for deals: 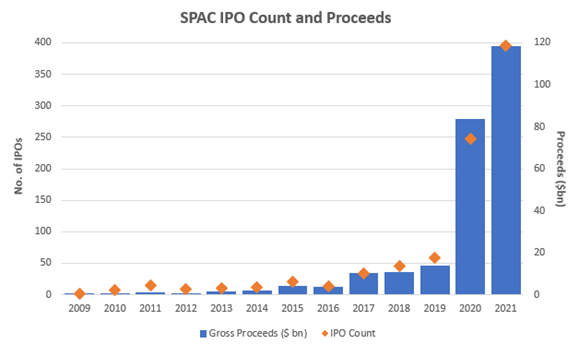 Like any investment, there are many risks, however, opportunities remain for savvy investors who undertake the proper due diligence and align themselves with strong sponsorship teams.