Economists were focused on three facets of the U.S. Federal Reserve (the Fed)’s meeting this week. Importantly, none of these three outcomes were particularly consequential for investors.

As a reminder, AIT is basically a commitment to keep U.S. interest rates lower for longer, allowing inflation to overshoot the 2% objective for a time to compensate for undershoots that normally occur during recessions and the early years of an economic recovery. The Fed did enhance its forward guidance, committing to keep interest rates at zero until the U.S. economy reaches full employment and “inflation has risen to 2 percent and is on track to moderately exceed 2 percent for some time.” 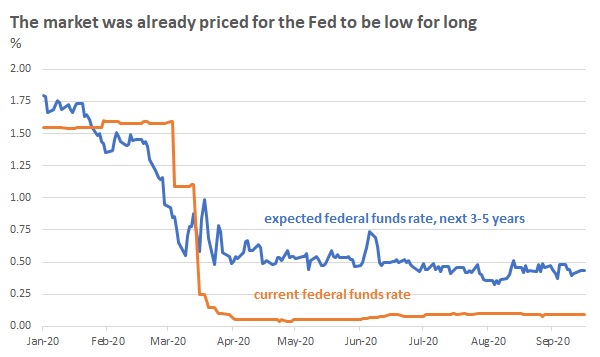 The Federal Reserve’s quantitative easing (QE) program to-date has bought Treasury securities across the Treasury curve. There is a view in the market—with short-term rates already glued to the floor—that the Fed could get more bang for the buck in terms of easing financial conditions by purchasing more duration from the market. Powell did not go there today.

The path forward largely hinges on the medium-term outlook for U.S. inflation. As we’ve written about, inflationary pressures are normally a consequence of an economy having more aggregate demand for goods and services than its productive capacity can handle. Given COVID-19 drove a recession and a shortfall in aggregate demand in the U.S., we do not see upside risks to inflation as being a major concern for at least the next one to two years.

Put differently, there is still a hole for the economy to climb out of before the output gap (economist lingo) closes. In our most bullish scenario for the U.S. economy (reflecting on the historic levels of fiscal stimulus, the natural disaster nature of the COVID-19 shock, and the better-than-expected economic news in recent months), we see rate hikes as being possible in late 2022. However, our central tendency is similar to the Fed’s, with it being much more likely that the U.S. central bank remains on hold through 2023 before inflationary pressures start showing an overshoot.