Before you bail on bonds, consider these 4 charts 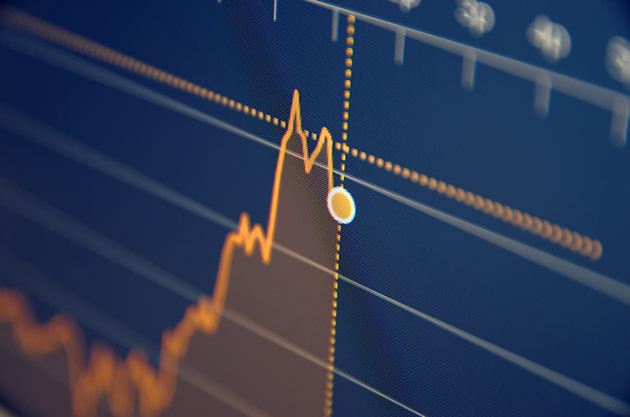 On the face of it, bond investors have had reason to worry in the first four months of 2018. Solid economic growth, Federal Reserve rate hikes and increasing concerns about inflation have driven the yield on the 10-year U.S. Treasury Bond up more than 50 basis points—from 2.41% to 2.93%—year to date as of April 30. Bond prices have naturally moved in the opposite direction: the recent spike in interest rates brought fixed income returns down 2.2% through April 30th as measured by the Bloomberg U.S. Aggregate Bond Index. However, a deeper look at the fixed income market offers hope for bond investors—particularly those investors wondering whether bonds still have a sensible role to play in their overall portfolio. As the charts below show, the fears surrounding bonds may be overblown. For many investors, bonds will still make sense as a key component of their portfolio.

For investors concerned about the impact of rising interest rates on bonds, it can help to get some historical and cross-asset class perspective. Viewed through these lenses, the losses associated with owning fixed income have been muted relative to the experience of other asset classes. For example, between 1989 and March 2018, the worst time period in which to own bonds was January 1994 to November 1994. The Bloomberg U.S. Aggregate Bond Index lost -5% in those dark days.  To be sure, nobody likes experiencing negative returns—and a -5% loss in a bond portfolio does not go unnoticed. However, that bond market pullback represented just a fraction of the amount equities have lost during the last two recessions. During the tech bubble crash of 2000–2002 and the global financial crisis from 2007–2009 the Russell 3000® Index lost -47% and -51%, respectively. History suggests abandoning fixed income exposure in favor of stocks increases your risk of losing money opposed to reducing it. 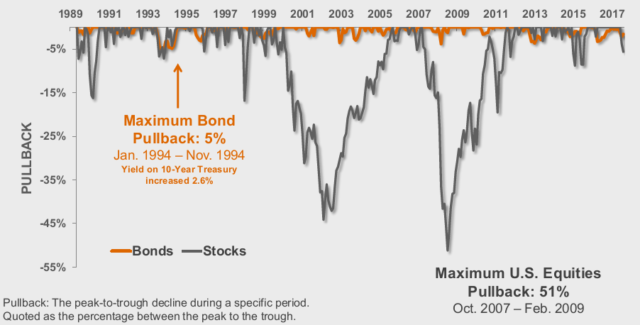 Source: Morningstar monthly max drawdown % for the Bloomberg U.S. Aggregate Bond Index (“Bonds”) & the Russell 3000® Index (“Stocks”) from 12/31/1989 to 3/31/2018. Indexes are unmanaged and cannot be invested in directly. Index returns represent past performance, are not a guarantee of future performance, and are not indicative of any specific investment. Diversification and strategic asset allocation do not assure profit or protect against loss in declining markets.

Historically, investors have been rewarded by fixed income over the long run

Despite periods of short-term volatility, over the long run fixed income investors have been rewarded with positive returns from the asset class. Going back to 1976 there have been just two three-year time periods where the Bloomberg U.S. Aggregate Bond Index has not delivered a positive return and in each of those time periods (October 1979–September 1981 and April 1978–March 1980) the index still did not lose more than 1%. Over longer time periods such as five, 10 and 20 years, returns on the index have never been negative and provided investors with returns of at least 2% per year. 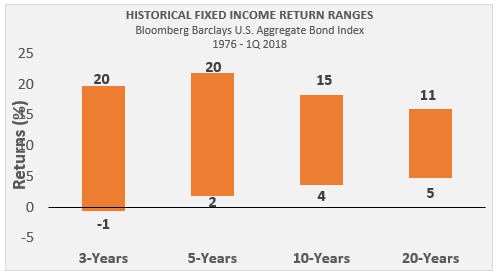 Source: Morningstar. Indexes are unmanaged and cannot be invested in directly. Index returns represent past performance, are not a guarantee of future performance, and are not indicative of any specific investment.

Total return includes both change in price and coupon payments

When thinking of rising rates, many investors focus only on the impact that rate increases have on the price of their bonds. They overlook the fact that the total return a bond investor earns over a given time period includes both the change in price and income received. It is possible to estimate the impact that rising rates will have on total return by comparing a bond’s current yield and duration–which is an estimate of how much a bond’s price will go down if interest rates increase by 1%. The example below shows an estimated impact of a 50-basis point increase in rates across various fixed income sectors based on current levels of yield and duration. As the example shows, despite the negative price impact of rising rates, the income portion of return is more than enough to offset the decline in price and still has the potential to result in a positive return.

Rising rates do not affect all sectors equally

While rising rates typically are not ideal for traditional fixed income sectors, there are certain areas of the asset class that have the potential to perform well in this type of environment. For example, bank loans, which typically are issued with floating interest rates, provide investors an opportunity to potentially benefit in time periods of rising rates. As the chart below shows, while year to date returns have been negative for most fixed income sectors, bank loans are up more than 2% on the year.

The last several months have been challenging for fixed income investors as interest rates have been on the rise. Despite concerns surrounding the asset class, investors should not abandon the allocation to bonds in their overall portfolio. History has shown that bonds preserve wealth much better than other asset classes such as stocks and that, over the long run, fixed income investors are rewarded. Maintaining exposure to multiple sectors within fixed income can help to reduce the risk associated with owning bonds in rising rate environments and could even result in achieving positive returns over those time periods.