7 things every adviser should know about the slacker generation

Where am I going to get my next client?

It’s a common refrain that echoes in the minds of many advisers. As baby boomers continue to age, many advisers are trying to figure out where to go to find the next generation of growing assets. If you believe the headlines, you’d think every adviser should focus on the millennial generation for the next set of great clients. The problem with doing this? You miss out entirely on the opportunities within Generation X .

At around 66 million individuals, Gen X is the smallest generation, according to Pew Research Center, but don’t let the size fool you into thinking Gen Xers aren’t worth prospecting. A few reasons why we believe Gen Xers will likely make great clients are that they’re by-and-large highly educated, in their peak earning years and in need of advice now more than ever.

You might be thinking, I know all of this. Hasn’t everything already been written about Gen X? While there’s undoubtedly some good stuff out there, I haven’t seen a piece written by an actual Gen Xer like myself. The purpose of this blog post is to give premier advisers a snapshot of what Gen X is about, and how to market specifically to Gen Xers.

Let me tell you a little about my generation: Generation X

Growing up in the 1980s and 90s, Gen Xers like myself saw the world transform in front of our eyes. From major events such as the end of the Cold War to the HIV epidemic, to the dot-com bust and the Great Recession, my generation has seen it all. Sprinkle in movies like Gremlins, The Breakfast Club, Ferris Bueller’s Day Off and Sixteen Candles, and you end up with quite the concoction.

Bueller’s Day Off and Sixteen Candles, and you end up with quite the concoction. As participation in the labour force increased, many of us came home after school to an empty house and were forced to contend with entertaining ourselves and not getting hurt at the same time. Often, we stayed outside until the street lights came on, then went inside and watched our favorite TV shows. We hung out at malls and skating rinks, and our Facebook was the telephone with the really long cord. We grew up in the midst of a technological revolution, becoming the first generation to use keyboards rather than typewriters. We went from Betamax to VHS, and from Atari to Nintendo. Our generation was known for being so weird that baby boomers predicted we’d all end up as slackers when we reached adulthood (Slackers was actually a movie made in 1991). Little did everyone know how appropriate that moniker would become.

7 things to know about the slacker generation

I’m attempting to generalise an entire generation here, so give me a little leeway. As a big fan of acronyms, here’s what I can tell you about Gen X:

Gen X is sandwiched in multiple ways. We’re sandwiched between the much-larger boomer and millennial generations. We’re also sandwiched between taking care of our parents as well as our kids. According to a debt.com study, the average cost of raising a kid until they’re 17 is about $234,000. Taking care of an elderly parent can cost another $140,0001. If you add saving for retirement on top of that, you can see why we’re all stressed and busy. So, don’t expect Gen Xers to come to a seminar or give their undivided attention on a conference call. The best way to work with Gen Xers is to meet with them individually, get referrals (yes, referrals!) and then quickly get to the point. While we’re a sandwiched generation often pressed for time, we really do need your help.

A sizable amount of the kids I went to school with were a product of divorce (including myself), but that’s largely changed in the decades since Gen Xers have grown up. Today, Gen Xers boast one of the lowest divorce rates of any generation—70% of marriages that began in the 1990s reached their 15th anniversary.2 This means that if you’re trying to prospect Gen Xers, be sure to include the whole family in the discussion. Take it from a Gen Xer like me: If you want my sign-off, you’d better make sure my wife is on board as well. We’re not only loyal to our families, but also to our employers, as Gen Xers don’t tend to jump from job to job like other generations. For instance, according to a recent job-hopper study, Gen Xers stay at their job for an average of 5.4 years, versus 2.4 years for millennials.3

Some people call us the MacGyver generation. If you don’t know the TV show I’m referencing, I feel bad for you. Unlike today, where many children seemingly play video games around the clock, our generation placed more of a value on outdoor play and creativity. A potato, after all, could become a clock in under five minutes.

Gen X was the first generation to experience a rise in women entering the workforce, leading some to also label us the latchkey generation. This term refers to the fact that many kids in the 80s and 90s went home to an empty house after school and were given a key to the latch to get into the house. If something broke when our parents were gone, we didn’t ask for help, we MacGyvered it. These factors, combined with the technological revolution at the time, all forced us to become more adaptable. As an adviser, you need to understand that by-and-large, while many Gen Xers are independent, adaptable and readily use email for communication, they still may crave that face-to-face interaction.

It’s my belief that no one in my generation believes anything they’re told. After all, much of what we were told growing up didn’t come true, and a lot of us have had a hard go of it since we graduated high school or college. This is why the trust but verify concept is very important to Gen X. In essence, this means quickly getting to the point when you communicate with my generation, and backing up your point with facts. From our vantage point, so-called experts aren’t actually experts—they only label themselves as such to establish credibility. This doesn’t fly with most Gen Xers. If you want our trust, show us, prove it to us and provide examples. Otherwise, the cynic in us will prevail.

Since we grew up in the decade of Six Sigma, many Gen Xers hold a university diploma–35% have a college degree.4What this means for advisers is there’s no need to hold back the complex stuff from us. Go into detail and walk us through the various scenarios. We can take it. The more we understand how investing will help us accomplish our goals, the more likely, you, the adviser, will earn our loyalty. A financial plan for us is an absolute must! Make certain, though, that you work with us to prioritise which goal(s) are important.

Have you ever met a Gen Xer that doesn’t work hard? Coming of age in the 90s, and then witnessing massive layoffs in the tech-bubble burst of 2000, followed by the Great Recession circa 2008, my generation understands the value of hard work. We also understand that nothing is given to us—we didn’t earn participation ribbons or trophies in school. Our hobbies, by-and-large, are our kids and families. We must work smart because, simply put, we have no time to waste. As an adviser, you can capitalise on this work ethic by laying out a roadmap for Gen Xers to follow. It’s a virtual guarantee that we’ll work hard toward that goal.

Clearly, my generation has not saved enough, even though we’re the first generation to have access to superannuation plans for the majority of our working careers.5 The median Gen X savings amount is only $66,000, as shown below. 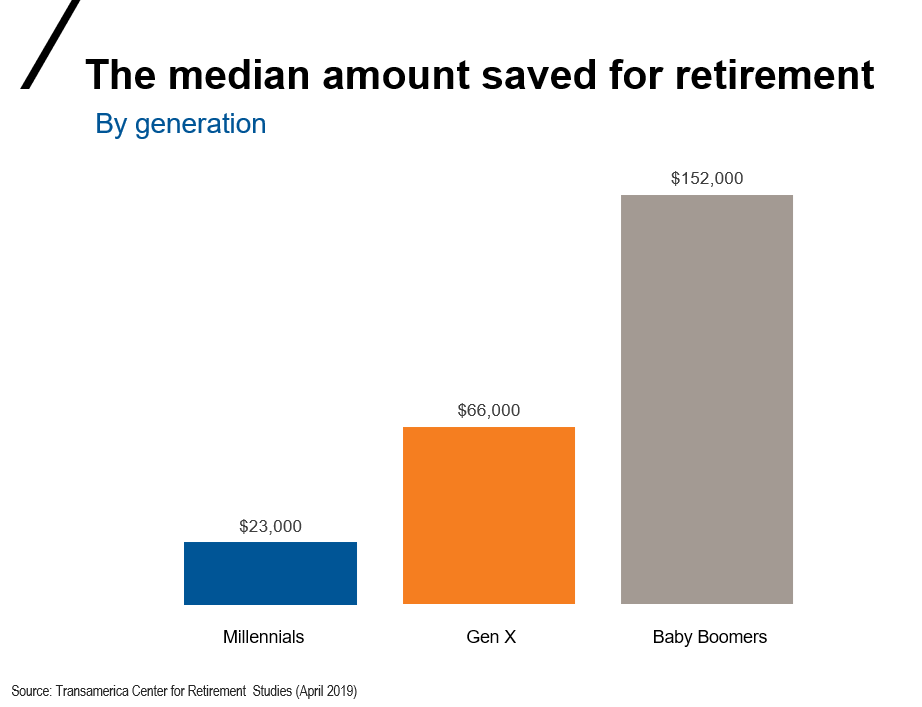 Achieving retirement readiness goes beyond mere saving, though.6 It also involves having a well-defined written strategy—which only one in seven Gen Xers has in place, according to the Transamerica Center for Retirement Studies. Knowing this, you, the adviser, need to stress how important planningis. Your true value comes from continuously adjusting a Gen Xer’s retirement plan to align with their ever-changing needs.

What, specifically, does this entail? The whole nine yards: plan reviews, analysing savings and investments, looking at student loans and stock options, considering employee benefits, superannuation, tax and estate planning, university funding, cashflow analysis, and retirement-income planning. Planning should be an ongoing process that keeps us on track and focused on our desired outcomes.

We know that we probably don’t have enough money squirreled away—and trust us, there’s no need to hand out participation ribbons for trying. However, we will be first in line for baby-boomer wealth transfers. As the previous generation leaves the workforce, guess who’s up next? Yep, it’s us, the slackers.

As Anthony Michael Hall put it at the end of The Breakfast Club:

Dear Mr. Vernon:
We accept the fact that we had to sacrifice a whole Saturday in detention for whatever it was we did wrong, but we think you’re crazy to make us write an essay telling you who we think we are. You see us as you want to see us—in the simplest terms and the most convenient definitions. But what we found out is that each one of us is a brain and an athlete, and a basket case, a princess, and a criminal. Does that answer your question?

Sincerely yours,
The Breakfast Club

Many advisers consider Generation X to be an afterthought. I consider this a giant mistake. My generation is savvy, adaptive, hard-working, complex and unique. Don’t make the mistake of ignoring us. Consider the S-L-A-C-K-E-R acronym and be better prepared to prospect this generation. Take it from me, a slacker to the core.