The Bank of Canada (BoC) surprised the markets Wednesday by delivering a hawkish 100 basis-point (bp) rate hike, raising its policy interest rate to 2.50%, the mid-point of its 2% to 3% neutral range. This was the first move of this size since 1998. It makes clear the BoC is concerned about inflation trends and, more importantly, business and consumer expectations of future inflation. Case in point: the BoC raised its headline inflation projections to 7.2% in 2022 and 4.6% in 2023, up from 5.3% and 2.8%, respectively. Inflation isn't expected to get close to the central bank’s 2% target until 2024. While inflation is clearly public enemy number one for the BoC, we believe accelerating the pace of rate hikes increases the likelihood of a recession in Canada later in 2023.

In its statement, the BoC described the rate hike as being "front-loaded." This suggest that it doesn't necessarily change the ultimate destination of where the policy interest rate peaks, simply that it gets there faster. Based on Wednesday’s press conference and prior BoC speeches, the bank’s intention is to raise the policy rate towards the upper end of its neutral range, or possibly slightly above it. This suggests the final destination for its policy rate could be around 3.25% to 3.5%. Perhaps that's why the market reaction to the news has been measured. Canadian stocks initially moved lower but then recovered and at the end of trading were relatively unchanged from the previous day. Bond prices also rose at first but retreated by the end of the day. Meanwhile, the market-implied year-end target rate was roughly 3.5% coming into the meeting, and it rose by about 20 bps after that, to about 3.7% as of late Wednesday afternoon. 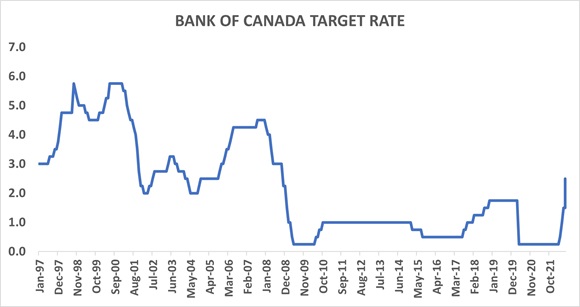 At the press conference, Governor Tiff Macklem explained there were three reasons why the bank decided to raise rates more forcefully:

On point #1, the BoC's Q2 Business Outlook Survey (BOS) and the Survey of Consumer Expectations indicated that expectations for wage growth are accelerating and feeding into inflation expectations. For instance, the BOS survey suggested that businesses expect wages to rise by 5.8% from 5.2% in the first quarter, while the two-year inflation expectation rose to 4.8% from 3.9%. Similarly, consumers' expectations for inflation rose to 5.0% from 4.6% in the prior quarter. Therefore, the BoC’s aggressive decision is intended to send a clear message that it is serious about achieving price stability.

The BoC cited housing and global factors as why inflation has been more persistent than initially anticipated. Global factors such as supply-chain constraints contributing to inflation are not in its control; however, housing is. Although the BoC is acutely aware the residential sector is extremely sensitive to interest rates, it views housing as partially contributing to the excess demand and overheating the economy, which is at the core of point #2.

Finally, on point #3, Macklem noted that achieving a soft landing is the goal. However, he acknowledged that it's becoming more challenging to accomplish. But the bank believes that front-loading the rate hikes improves the probability of that outcome.


The more aggressive rate path comes at a cost to the economy, and the BoC knows it. While the Canadian economy will continue to benefit from housing and high commodity prices in 2022, supporting expected growth of 3.5%, the bank expects 2023 growth to slip to 1.75%, below its assessment of a 2% potential growth rate. This is by design, however, as the intention is to reduce demand to tame inflation, which means slower economic growth.


We had been of the belief that the BoC would raise rates to a level below the market expectation of a 3.5% year-end target rate, mainly due to housing vulnerabilities. Wednesday’s ultra-hawkish rate hike bring that view into question. Where we differ from the BoC is related to housing risks. The BoC believes achieving a soft landing is possible by stripping out the "excess" contribution from housing demand. While possible, we believe policy works with a lag. And that it will be six to 12 months from now when the economy will feel these aggressive rate hikes more intensely, just as households will deal with mortgages resetting at higher rates.

The bottom line is that the BoC is rightly concerned about inflation and is acting more forcefully to get it under control. The most significant risk, in our view, is that achieving a soft landing could harm one of the most critical and most vulnerable sectors of the economy, housing. Despite our concerns, we now believe the target rate will rise to 3.5% in this rate cycle. However, this could come at the risk of not achieving a soft landing and increasing recession risks over a 12-month horizon.