The benefit of rising interest rates to U.S. investors with international assets

Can rising interest rates be a positive for USD-based investors?

U.S. investors can capitalize on the current and implied future interest rate differential between the US and MSCI EAFE¹ countries by hedging their foreign currency exposure. In addition to eliminating currency risk in your international portfolio, the current carry return of about 140 bp for USD-based investors could add value to the portfolio.

At the beginning of the COVID-19 pandemic, central banks aggressively lowered and/or kept interest rates low to attempt to stimulate growth. As COVID restrictions have eased, and both growth and inflation have increased to historically high levels, many developed-market central banks are now raising interest rates. As economic recoveries have progressed to varying degrees and inflation pressures differ, the pace and extent of current and expected monetary policy tightening is uneven.

While the U.S. Federal Reserve (Fed) and the Bank of England have raised their policy rate to around 1%, the European Central Bank and the Bank of Japan are yet to embark on their hiking cycle (see Chart 1). Using forward interest rate markets to gauge the future interest rate path, we can see that the Fed is expected to raise rates to around 3% by mid-2023. While markets predict the other three central banks to tighten as well, the U.S. would have the highest policy rate if market pricing turns out to be correct. The resulting interest rate gap in favor of the U.S. dollar means that passive currency hedging generates a positive carry return for U.S. investors.

The Fed is expected to rapidly remove accommodation 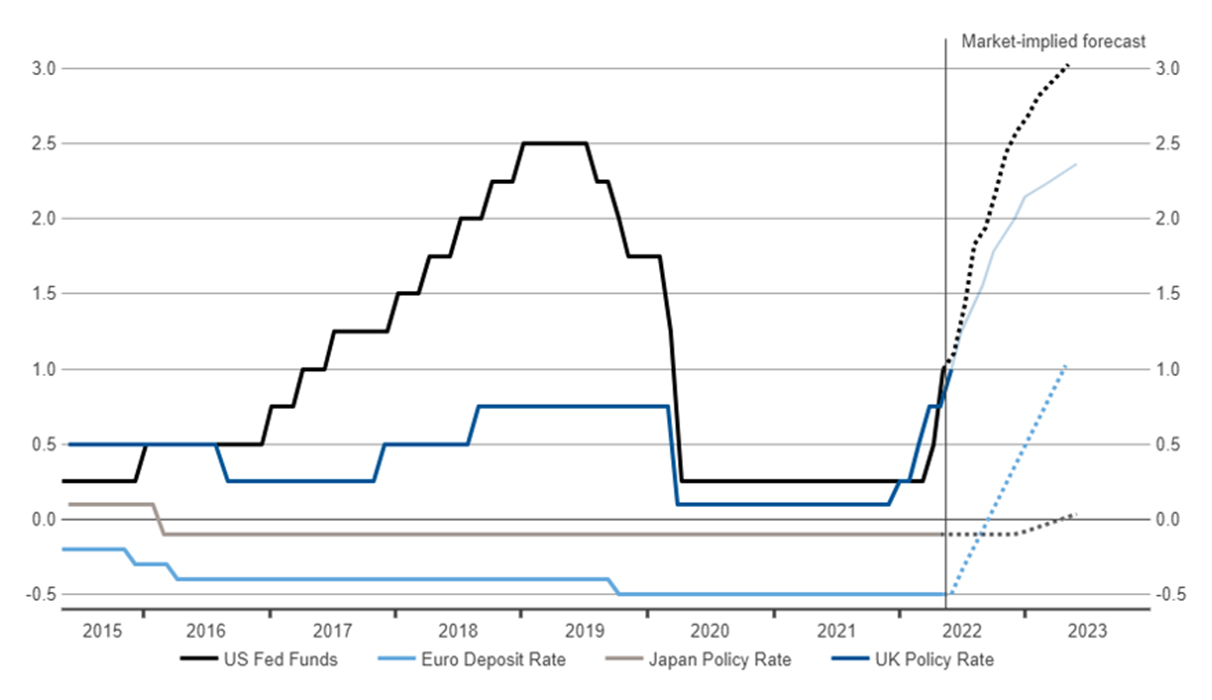 When U.S. investors hedge their foreign currency risk, they synthetically sell exposure to foreign currencies and buy U.S. dollars (USD) for future delivery. Practically, this can be achieved via currency-forward contracts. The interest differential the U.S. investor gains through this synthetic lending and borrowing is reflected in forward points embedded in the currency forward contract. As monetary policies diverge and the gap between short-term interest rates around the world widens, these interest rate differences can create a material impact on performance at a total plan level.

In Chart 2, we show the annual carry of the U.S. dollar against a basket of currencies weighted according to the MSCI EAFE index. Prior to 2015, U.S. investors mostly faced negative carry from passively hedging their EAFE exposure back to their base currency. Since the Fed started tightening monetary policy by increasing the overnight federal funds rate at the end of 2015, the gap between U.S. and non-U.S. interest rates began widening to levels not seen since 2008. This gap collapsed after the pandemic-induced recession of 2020. But with economies recovering over the last two years and inflation now breaching the tolerance levels of central banks and policymakers, we have returned to an environment of rising interest rates. Currently, U.S. investors can reap about 140 basis points annually from the interest rate differential by passively hedging the foreign currency exposure in their international equity portfolios, specifically those represented by the MSCI EAFE index. As indicated in Chart 1, this carry return is forecast to increase, with the U.S. following a steeper rate hiking path than its peers.

An important caveat is in order. Positive carry is a significant tailwind for returns, but it is by no means a guarantee that currency hedging will produce higher returns in the future than not hedging. The dollar may weaken by more than the interest rate differential over the lifetime of the hedging program. Given the high level of the U.S. dollar, getting the timing wrong is a very legitimate concern. However, we believe U.S. investors should strongly consider currency hedging now as they can eliminate currency risk from their international portfolios and earn a positive carry. There are ways to mitigate the timing risk of launching a hedging program, such as using a glidepath to gradually reach the desired hedge ratio. 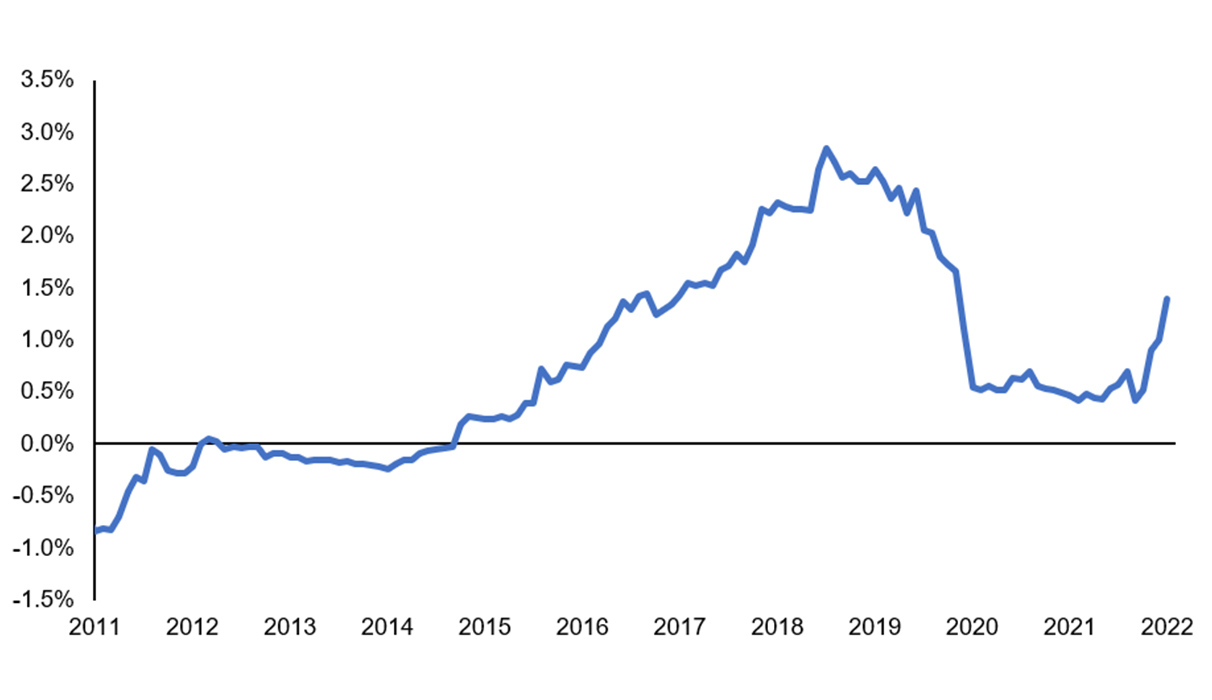 Source: Russell Investments and Bloomberg, as of April 2022

Establishing a currency hedge can be done very cost-effectively. The widening gap between U.S. and foreign interest rates is one reason to assess the merits of currency hedging for USD-based investors. We stand ready to assist.

¹ The MSCI EAFE Index is designed to represent the performance of large and mid-cap securities across 21 developed markets, including countries in Europe, Australasia and the Far East, excluding the U.S. and Canada.