The full extent of income support for impacted U.S. households is impressive

Editor’s note: Beginning today, we will provide updates on the economic fallout from the coronavirus crisis three times a week.

Global equity index futures are trading up about 4% this morning. The coronavirus data over the weekend was less bad. The growth rate in new confirmed cases over the last 24 hours globally was the lowest since March 17—a welcome sign that containment measures are gaining some traction in slowing the spread of the disease. France, Italy and Spain continue to show a plateauing in the number of new confirmed cases, while New York is showing tentative signs of a possible step-down in new case growth.

In the United States, the Paycheck Protection Program kicked off last Friday. This $350 billion pool of funds from the CARES Act allows small businesses to borrow up to $10 million each. What makes this program special is that any proceeds a small business uses to maintain its payroll or pay mortgage, rent or utility bills will be forgiven (making it effectively a cash grant).

Even though the program is only a few days old, initial take-up has been very significant. As of Monday morning, Bank of America alone has reportedly received 177,000 applications totaling $32.6 billion of financing. Similarly, Wells Fargo has also seen intense demand and has reportedly reached the full $10 billion it is willing to lend around its own balance sheet constraints. The launch has not been without glitches but the strong interest from small businesses is a good thing. This is one of the better-designed programs in the stimulus bill, helping many small businesses bridge their operations to the other side of the current crisis. If the $350 billion of funding is exhausted prematurely, we suspect the Treasury Secretary will ask Congress for more money.

How the U.S. government is providing substantial income support

Today, I want to expand a bit more on the extent of income support the government is providing to U.S. households. As we’ve noted previously, there have already been roughly 10 million initial jobless claims filed in the states over just the last few weeks, which (forgetting about last Friday’s employment report for a second) takes the real-time unemployment rate up to around 10%. This is where it peaked in the Great Financial Crisis and most indications suggest it could move higher still. That’s a lot of labor market damage in a short period of time.

However, there are three income backstops for households that collectively make a typical median wage earner whole again:

In the exhibit below, we look at some sensitivity around a median wage earner to calculate combined state and federal benefits for someone earning $600 per week (left side) and $1,200 per week (right side).2 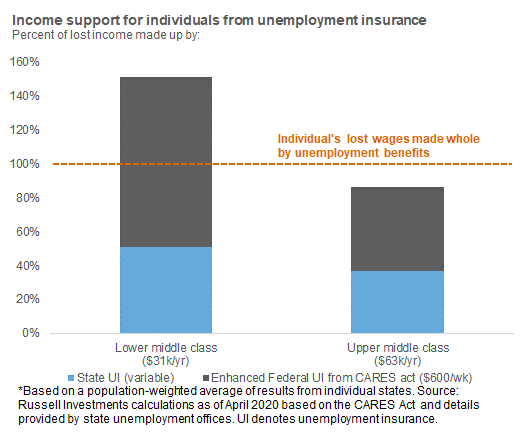 Bottom line: the household benefits are substantial, and are enough to fully replace lost wage income for a median earner in most states. While losing a job can be a traumatic experience financially and emotionally, the U.S. government will be effectively cushioning the blow here. It could still take quite some time for the income support to flow through to aggregate spending, as many businesses are still shuttered. But this should keep household balance sheets relatively healthy and promote a stronger, eventual recovery.

One final point: the U.S. is not alone in providing a backstop to affected households and businesses. Erik Ristuben has already written about how European economies, institutionally and culturally, have stronger built-in protections. Germany and the United Kingdom, for example, have been quite proactive in their crisis response programs. And if we take a global lens, countries like Singapore—with a 12% of GDP (gross domestic product) cumulative stimulus response—have arguably done even more than what we’re seeing here on my home turf.

1 If we were to amortize this over, say, a six-month period, it would come out at $46 per week, which would not be as significant as the other measures discussed or shown in the exhibit.
2 For simplicity we assume the wage earner is unmarried and has no children.