Most developed markets are still enforcing strict containment measures. There are some green shoots that those efforts may be starting to slow net new infections in Italy and other European countries. Governments continue to plow money into their local economies to provide income support to impacted households and businesses. Across the Pacific, Australia announced a wage subsidy measure —valued at roughly 6.5% of GDP (gross domestic product)—for companies that have sharp revenue declines but keep their workforce employed. China’s Politburo also talked about the need for further fiscal and monetary stimulus to achieve economic stability.

This Wednesday marks the start of April, and with that the start of the reporting season for March economic data. We know entire industries were shuttered in the United States and Europe in March. And some of the timeliest data around global manufacturing and the U.S. labor market point to an unprecedentedly sharp slowdown. Today’s special topic is a closer look at just how horrible those March numbers are likely to look. 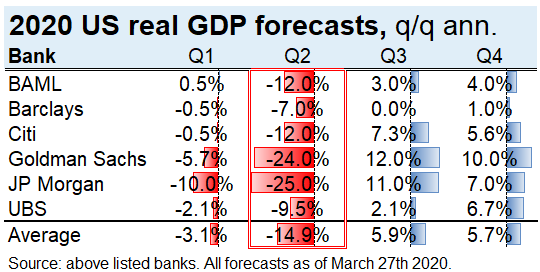 We could go on. But the point is that we are going to be peppered with worst-ever headlines for weeks or months on end. Now is an important time to stay disciplined and focus on long-term investment plans. As the numbers roll in, ask yourself if the data is telling you something you don’t already know. We all know that the global economy has been damaged by the containment efforts from the coronavirus, and that markets have sold off to reflect that damage. Being prepared for bad news can help us avoid making behavioral mistakes when those around us are panicked.