A 2x4 costs how much? U.S. inflation comes in hot again in May

Today, the U.S. Labor Department reported that its core consumer price index (CPI) for the month of May increased by a whopping 3.8% on a year-over-year basis. This marks the second month in a row where U.S. inflation has handily beaten expectations, and the numbers are frankly quite big—the sequential inflation readings in both April and May were some of the strongest numbers we have seen since the early 1980s (see the blue line below, with a dot marking today’s report). 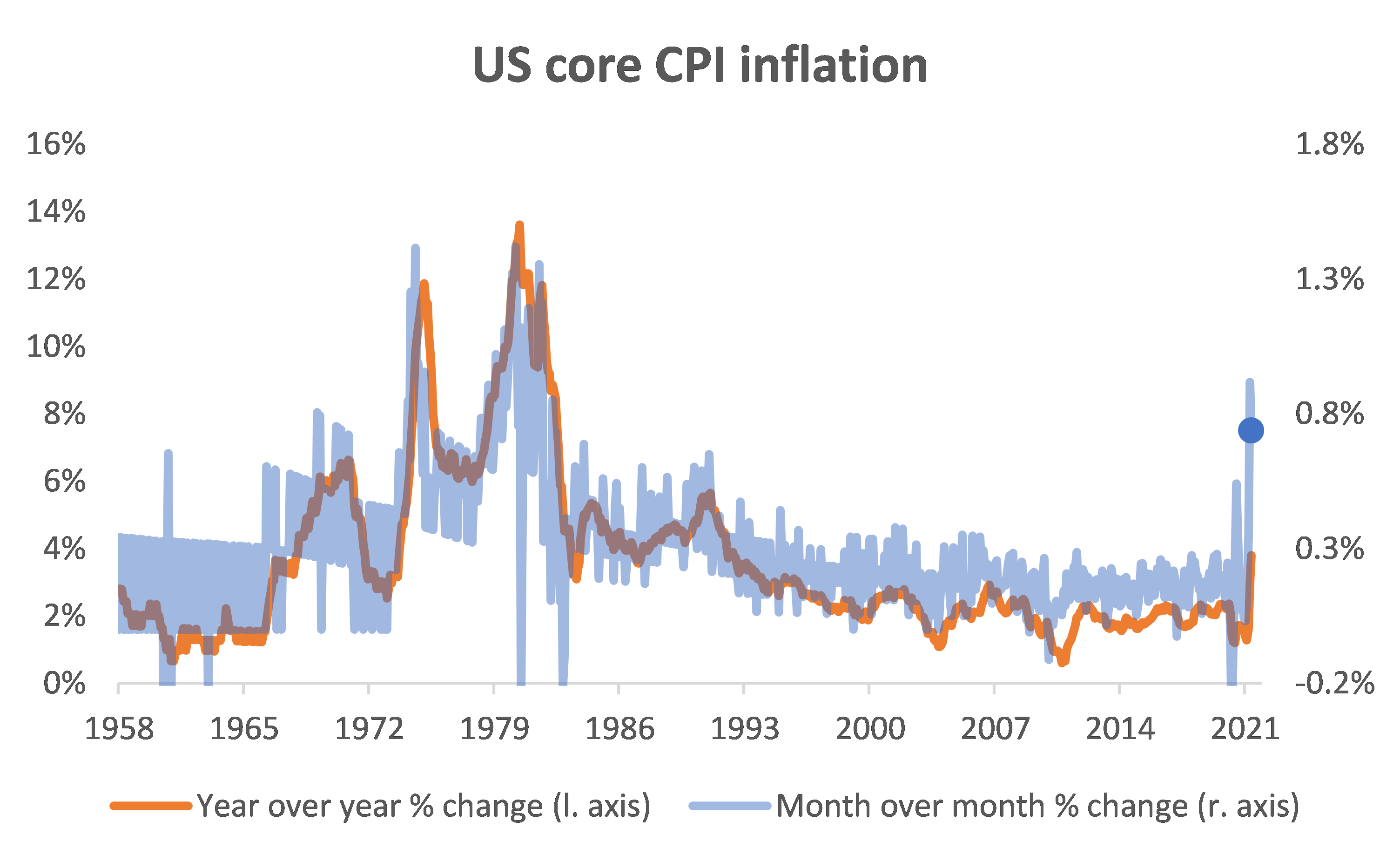 So, is it time to start worrying about a major inflation breakout in the United States? Probably not.

Last month we noted that almost 80% of the inflation was driven by transitory items. Basically, the nation is experiencing large increases in used car prices (due to semiconductor shortages), and in other categories like airfares and hotel prices, which are recovering from depressed levels as the economy normalizes. This is not the kind of inflation that is likely to persist year after year after year. What was hot this month? Well, used car prices (again), airfares (again), and restaurants (new).

Categories like airfares and hotel prices are still running well below their pre-COVID trends, suggesting further strength in coming months is possible (if not likely). But when looking out to 2022 and beyond, we need to think about inflation more fundamentally.

The basics of inflation: An imbalance between supply and demand

Supply shortages normally resolve themselves over time either by creating an incentive (i.e., a higher price and profit) for businesses that can invest to build out new manufacturing capacity, or clear up when whatever event or catalyst that caused the shortage fades away. Here, of course, enters the COVID-19 crisis—marked not only by the enormous dislocations it has imposed on the global economy but also by the historic fiscal stimulus campaigns from governments around the world to keep the economic engine going. As a reminder, inflation is all about too much money chasing too few goods and services.

In the United States, consumer demand was recently supercharged by the US$1,400 stimulus checks1 from the American Rescue Plan. Those checks are unlikely to be repeated. And even if President Joe Biden is able to pass his next stimulus rounds—the American Jobs Plan and American Families Plan—the impact of those bills on the economy is spread over many years, and therefore much less impactful for immediate demand-side risks to inflation.

Meanwhile, the supply side of the economy is constrained and facing shortages despite 7.6 million Americans being out of work. The threat of COVID on worker safety and health has impacted the willingness for some individuals to return to the labor force, the impact of COVID on childcare arrangements for working families has also had a meaningful impact on labor supply and the generous federal unemployment benefits from the American Rescue Plan (US$300 per week on top of normal state benefits that average about US$300 per week) mean many low-wage workers are getting paid more to sit on the sidelines right now.

However, we believe that most of these issues are likely to resolve themselves in coming months. Vaccines are thankfully proving to be highly effective and COVID cases, nationally, are at their lowest levels since March of 2020. Childcare constraints are likely to diminish in September as kids go back to school and more and more young children become eligible for vaccination later this year. And the distortions from the federal unemployment benefits should also fade—either because the federal program itself is scheduled to expire in September or because half of U.S. states have already announced a premature termination of those benefits, some beginning this weekend.

Inflation forecast for 2022: A slowdown in price increases?

Once these demand and supply-side distortions fade, we expect core inflation to moderate back down to levels that are not concerning in 2022—specifically 2% or less on core PCE (personal consumption expenditures) inflation. That’s our baseline. Basically, there is still a big output gap (or a lot of spare capacity) that needs to get absorbed before our macro models become worried about more persistent inflation taking hold.

That being said, when it comes to the risks of an inflation breakout, note that I only wrote probably not above. Simply put, forecasting the future is hard, and we need to be attentive to the risks that we might be wrong.

How we could be wrong—and what our risk markers are

One possibility is that very rapid inflation in just a few categories bleeds into the inflation expectations of households and businesses, causing a self-reinforcing upward shift in the price formation process for a broader basket of goods and services. We can’t rule this out, but so far measures of inflation expectations —like the breakeven inflation rate that gets priced from Treasury Inflation Protected Securities (TIPS) —still look well anchored at levels that are consistent with the Federal Reserve (the Fed)’s 2% objective over the medium-term. If inflation expectations look like they might be becoming unmoored, that would be an important risk marker for our current outlook.

A second possibility is that the rapid wage growth that we have seen in recent months persists into 2022. Again, we don’t think this is likely because of the known distortions discussed above. But if we’re wrong and companies are willing and able to pass this higher wage bill on in the form of higher consumer prices, that would be concerning. We’ll be looking at measures like the Federal Reserve Bank of Atlanta’s Wage Tracker to see if wage growth proves to be stickier or more robust than we think. Normally wage growth in excess of productivity growth (roughly 1.5% on a trend basis) and pricing power (2% Fed target) can suggest that cyclical pressures in the labor market are at risk of creating an inflation problem. Tacking on a little wiggle room for the normal noise in the data, if we were to see wage growth running in excess of 4% in 2022, that would be another risk marker for our outlook.

A third possibility is that the recovery is just so robust that the U.S. economy eats through spare capacity and reaches a point of overheating faster than we, or most other economists, expect. We’re forecasting 7% real GDP (gross domestic product) growth in 2021, which would mark a 36-year high for the United States. Economic and earnings data have generally been surprising to the upside and there is a real risk that not all of the 7.6 million workers want to come back to the labor market. COVID seems to have accelerated a shift toward early retirement for baby boomers. A return to very strong nonfarm payroll growth of 750,0000 to 1 million jobs per month could get the U.S. economy back to full employment as early as the first or second quarter of 2022.

Finally, not all inflation is created equally. The housing market is red-hot—and owners’ equivalent rent is one of the largest and most important categories of the CPI and PCE inflation baskets. Tight inventories support further moderate gains in home price appreciation and could be a tailwind for this very important, cyclical inflation category.

We believe that a diversified, multi-asset portfolio is likely best suited to weather the range of possible macroeconomic and market scenarios in the months and years ahead. If inflation does materialize in a more significant way, we would expect the riskier parts of the portfolio to offer reasonable real returns over the medium-term.

Equities offer a partial inflation hedge as companies can increase their prices to protect their profitability against surging input and labor costs. Within the equity market we would expect value companies to outperform growth companies, particularly in the short-term as higher interest rates hurt the discounting of cash flows for growth companies more, given they are typically expected to occur further out into the future. Furthermore, the value style is currently more exposed to natural inflation hedges in the commodity-intensive sectors like energy and materials.

Listed real assets—like Real Estate Investment Trusts (REITS) and infrastructure—have also provided a reasonable hedge to inflation risks historically. We believe that fixed income securities and low volatility stocks are likely to be laggards, but recognize that this is a blanket statement. Shorter-duration high yield credits and floating rate bank loans are among a menu of assets in the fixed income space that could potentially outperform and, in our opinion, offer good alpha opportunities in a higher inflation regime.

While May’s inflation numbers came in higher than anticipated, the bulk of the increase in costs continues to be driven by transitory issues that are likely to be resolved later this year as supply catches up to demand. Amid this backdrop, we believe that current inflationary pressures are likely to slow as 2022 approaches and the economy returns to a more normal state.

In other words, if you’re shocked by the cost of a 2x4 (like this author), consider holding off on that home-improvement project until next year.