Every year, Russell Investments tracks the largest defined benefit (DB) plans with liabilities in excess of $20B, which we affectionately refer to as the $20 billion club. While this collection of jumbo-sized sponsors certainly grabs headlines, their actions tend to forge industry trends. Following the recent update on plans' experience in 2017, we have reviewed the changes these sponsors implemented as they continue to take more control of the costs and better manage the risks of their plans.

2017 was a record breaking year for the $20 billion club in a number of ways. Contributions were double those in 2016 and 20% higher than the next highest amount made over the last decade. Discount rates bottomed out, down roughly 45 bps during 2017 and 30 bps lower than 2012 lows. Pension liabilities topped $975 billion, though assets skied to $820 billion thanks in part to contributions and very strong investment earnings.

Overall, the $20 billion club pension funded status increased to 84%, the first significant rise in funding levels since 2013. Despite the tailwinds to improved funded status in 2017, the current low interest rate and return environment is causing sponsors to keep on focusing on areas they can control, which are found in their plan design, funding and investment policies. As the largest corporate DB sponsors in the US, the $20 billion club continue to set the trends on how plan sponsors can improve funded positions and take steps to minimize portfolio risks to promote stability, reduce surprises, and place sponsors in control of their DB plans’ endgame.

The following are some notable policy moves in 2017, which are also highlighted in this paper:

Benefits policy: Sponsors can control the costs of a pension plan through plan design (i.e. the size and the style of promised benefits) to participant eligibility for future benefit accruals (i.e., closing participation to new hires and ultimately freezing benefit accruals). In 2017, UPS announced a freeze to its non-union plans, a full freeze of Pfizer’s US DB plans became effective, and Ford announced that it was implementing a service cap on all salaried benefits effective next year.

In 2017, the average service cost for the 20 companies in the $20 billion club was 1.7% of their total projected benefit obligation, roughly 1% lower than it was a decade ago.

Service cost relative to PBO since 2006 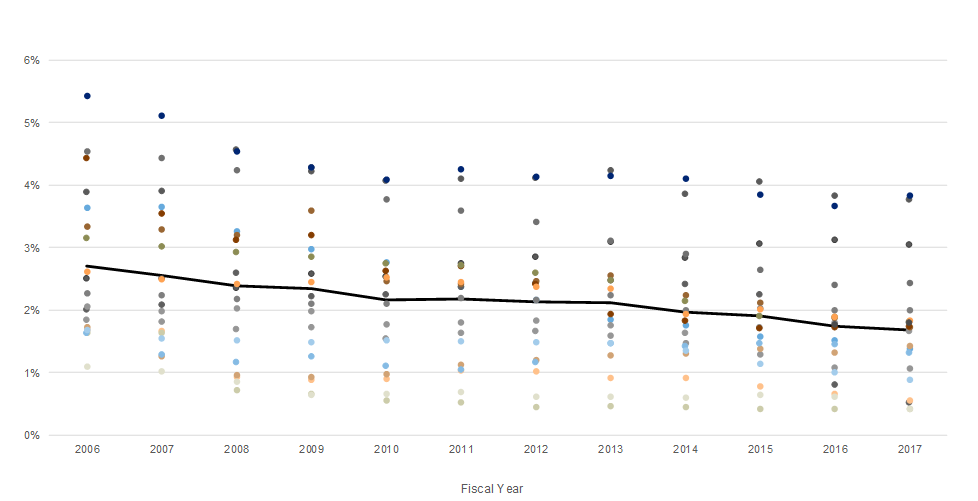 Funding policy: 2017 was anticipated to have a significant increase in pension contributions, as $20 billion club plan sponsors accelerated funding to take advantage of current federal tax deductions that will be reduced because of the Tax Cuts and Jobs Act of 2017. UPS, Boeing, DuPont, United Technologies, Ford, Raytheon, and 3M all made contributions in excess of $1B citing tax savings as a reason. Additionally, FedEx, GE, Pfizer, and Lockheed Martin all plan significant contributions in 2018 to improve funded status and take advantage of current Federal tax deductions before the new corporate tax cuts.

Investment policy: Continuing the theme of the strategic shift from asset-only focus to asset-liability focus, the $20 billion club continued the trend of plan sponsors de-risking their asset allocations. IBM pushed this trend by increasing their fixed income allocation target from 70% to 80% while Exxon, United Technologies, and General Motors continued to move from equity assets to fixed income assets.

As important, $20 billion club plan sponsors continued to recognize that de-risked portfolios and lower return environments should lead to decreasing expected long-term return on assets (ELTRA) assumptions. The $20 billion club ELTRA continued its downward trajectory by 15 bps from 7.45% in 2016 to 7.30% in 2017 (a full 85bps decrease since 2011).

Many corporate sponsors have taken steps to reduce the cost and risk of their DB plans. These trends continued in 2017 with the $20 billion club leading the way.