How are we going to pay for all of this? The COVID-19 impact on U.S. tax policy

Two months into one of the most disruptive crises of our lifetimes, we have all become accustomed to words and phrases such as unprecedented, severe, social distancing, etc. Although these words are perhaps less jarring than they were prior to the onset of the coronavirus outbreak, they truly do capture the impact of this health crisis on the economy, now and in the years to come.

So, what is being done to mitigate some of the immediate as well as intermediate impacts? Simply put, unprecedented stimulus—to tide us over until we can get the economy going once again. My focus here is a domestic one, pertaining solely to the United States and the potential impacts of the stimulus measures on U.S. tax policy. But similar scenarios will likely play out across the globe. Much of this stimulus is well known and documented at this point. But to better illustrate what may need to happen down the line when it comes to taxes, let’s walk through some of the known stimulus measures, as of this moment in time.

Several weeks ago, through bipartisan support, a bill known as the CARES Act was signed into law, authorizing $2.2 trillion in outlays focused on direct payments, payroll subsidies, business support and other economic support items.And on the breaking news front, another $500 billion in stimulus is pending approval by Congress on April 23. These are not small numbers. Together, they put the total amount of COVID-19 federal stimulus at just under $3 trillion.

We have never seen the U.S. government commit to an outlay of this magnitude aside from the two world wars. To put this in context, the federal budget deficit coming out of this is expected to be 16.1%, using consensus estimates. As a percentage of annual tax revenue, it works out to be over 80% of annual tax receipts based on 2019 revenues.1 Again, these are not small numbers. 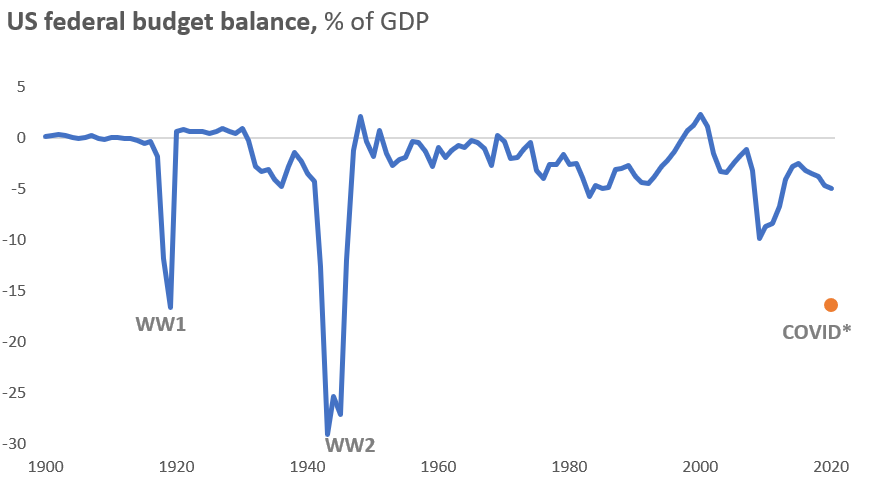 Source: Historical Statistics of the United States, CBO. *Denotes the consensus estimate for 2020 as an average of forecasts from BAML, JP Morgan, Goldman Sachs, and UBS as of April 23, 2020.

In addition, there has been a significant level of support—and promise of additional support—from the U.S. Federal Reserve (the Fed). The central bank has stated that it will provide nearly unlimited QE (quantitative easing) support to keep lending costs as low as possible. This could come in at upward of $7 trillion in lending support, expanding the Fed balance sheet up to $11 trillion. For context, we started the year with the Fed balance sheet at $4 trillion.

Outside the federal level, there are additional measures being enacted relating to economic support and income support at the state and local level. There are limited estimates right now on what these may look like, as such efforts are only just beginning, but expectations are that these measures will be significant as well.

We won’t hit on the why here—that is, why is all this stimulus needed. It’s abundantly clear that these levels of economic support are absolutely necessary due to the near-standstill of the economy. For a more detailed explanation, my colleagues Paul Eitelman and Erik Ristuben have written numerous blog posts on the whys and hows related to all of this.

The answer is honestly not yet known, and might not be known for a while. Essentially, we have a lot more questions than answers today.

What we also don’t know yet is how much is this going to cost us, all totaled. Hundreds of billions of dollars is likely a safe answer for now—and trillions of dollar is not a reach. Potential exact amounts, however, are not yet but fully known.

What is the impact on tax revenues going to look like? While the situation is ongoing and changing daily, it is safe to assume that tax revenues this year are going to be severely impacted. Notably, this impact could carry over for years to come.

The early Congressional Budget Office (CBO) estimate for this, released April 16, is sobering. A $1.8 trillion increase in the budget deficit, at minimum, over the next decade is forecasted by the CBO.

How could this play out for tax policy? While there are many different, nuanced scenarios of what this may look like, I believe there are two central ones most likely here—one more positive and one more negative.

Scenario one: We have to pay for this. Tax increases for all.

I have said this before, and will say it again here—we are more likely to see tax increases than decreases in the future. Let me be clear—this is not what I or we personally desire, but is the reality based on probabilities. COVID-19 and its economic impacts nearly assures us of this—and this is in addition to the already daunting entitlement math that preceded this. Today, we have among the lowest tax rates U.S. citizens have experienced since the inception of the tax code.This is not likely to last. 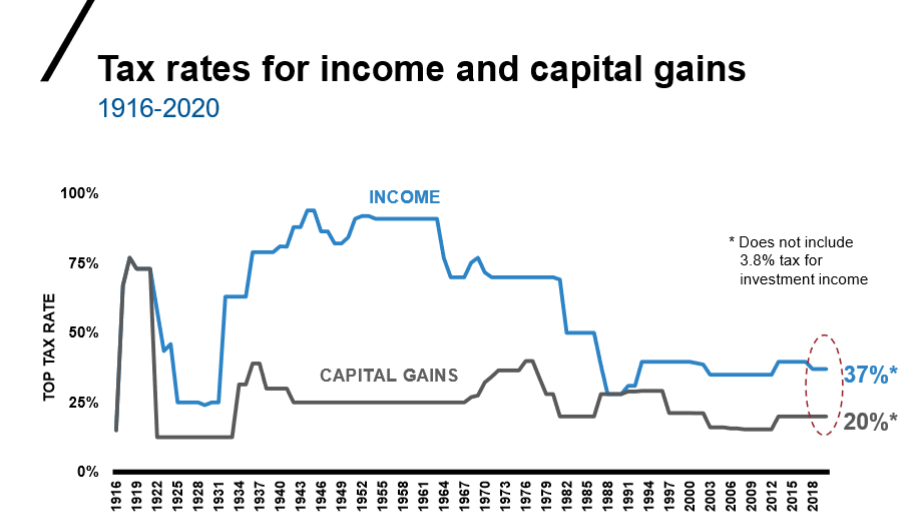 Looking at these numbers, one can envision a scenario where the government both increases tax rates across the spectrum as well as seeks to broaden the taxpayer base. The cost of this situation will be undoubtedly large, and we will somehow need to pay for it. This scenario is not a desirable one by most, but most of us didn’t expect or want the situation we are in now either.

Scenario two: We grow our way out of this (with a little more government support)

We can expect that the federal government will be just as aggressive to help pull the U.S. economy out of the funk it’s in due to COVID-19 as it was to stabilize things during this pandemic-related economic shutdown. For clues, we can look back to the period after WWII. In the post-war years, the U.S. government was aggressive in its policy support actions, as well as in its interest rate policy. The government effectively capped rates, permitting a relatively long period of borrowing at low rates to allow innovation, growth and capital infusions to help us grow our way out of this.I am not suggesting that this will be the course of action exactly, but there are clues in history and corollaries to the present to suggest that this could occur.

There is a key difference, however. Coming out of WWII, America experienced a significant technological boom that gave us many of today’s luxuries: televisions, phones, computers, microwave ovens and airplanes, to name a few. That level of advancement and growth was made possible by technological breakthroughs that occurred during the war. What are the positive economic developments to come post-COVID19, if any?

At the end of the day, even with scenario two, the U.S. saw sky-high income tax rates in the subsequent years and decades. Put simply, all bills come due—this one included. While it is possible we could see a continuation of low tax rates for years to come even beyond 2025 (this is when the current individual income tax rates are set to expire and revert back to the higher pre-2017 levels), it is safe to assume that rates will increase going forward. This appears especially true when thinking about this in terms of probabilities and the bills we will have due, plus the deficits we have at present.

What can you do to prepare for higher tax rates?

Align yourself today in preparation for tomorrow. We all know how taxes work. We all have to pay them every year. Think about how tax management and long-term investing, when done side-by-side, can be a solution for an unwanted tax problem.

We’ve already extolled the benefits of tax management today, within a lower tax rate environment. Think about how much more tax management can help if and when tax rates move up from here.

We also firmly believe that now may be a good time to take advantage of market volatility and downward market moves and transition from a legacy mutual fund portfolio into a tax-managed portfolio that aligns with your long term goals. While there admittedly is never a perfect time, we believe it’s prudent to prepare now for future tax increases by embracing tax-management for long-term taxable investing. Let us know if we can help.