It has been well documented that, over the last five years, a small number of mega-cap stocks have contributed a substantial amount to the overall U.S. market returns. The impact of these stocks, especially the FAANG and Microsoft stocks, was due to their outstanding growth and their large size relative to the U.S. market. This has also coincided with a massive industry-wide switch from actively managed funds toward passively managed funds.

According to researchers from the U.S. Federal Reserve1, as of the end of 2018, 47% of total U.S. equity fund assets were in passive funds, up from around 14% in 2005. Over the same period, overall stock ownership by passive funds (mutual funds and ETFs) increased from 4% to 14%.

That brings us to two questions:

Has passive investing helped drive the mega-cap, FAANG-led, outperformance over the last five years? And has that led to potential advantages from active management at this point in time?

In general, the standard benchmark for passive investing is an index that tries to capture the performance of the broad market, as represented by common benchmarks such as the S&P500® large-cap index or the Russell 2000 small-cap index. Passive investing does not affect the relative weight of securities within the index. Only the cumulative action of active investors sets the prices of securities, and passive investors just go along for the free ride. For all practical purposes (with the exception of securities being added or removed from the index), in the absence of additional cashflows in or out, passive funds require no trading to track the benchmark, as the security weights automatically change as active investors reset prices based on their insights.

This leads to our first point: Passive investing, by definition, cannot create bubbles (or relative mispricing) within an index.

Passive investing could only create bubbles if the underlying index is focused on a subset of the marketable universe of securities. However, a large portion of passive investments are benchmarked to broad market indices. For example, the nine largest ETFs and index mutual funds—representing approximately $2.7 trillion in assets as of December 2019 and over 60% of passive U.S. equity investments—are benchmarked to broad market indices, such as the S&P 500® Index and CRSP U.S. Total Market Index. These cover approximately 80% and 99% of the investable U.S. equity market, respectively.2

A follow up question must be asked: If passive investing cannot create bubbles, can it perpetuate bubbles by making it difficult for active managers to reset prices? Certainly, if passive investing became 100% of the market, there would be no investors left to change the relative valuation of securities. But even with the significant reallocation from active to passive strategies, active investing is still approximately 50% of the fund market in the U.S. This is a large enough percentage to take advantage of perceived security mispricing and reset prices in the market. Also, as stated earlier, only approximately 14% of total stock holdings are held by passive funds. If passive investing dominated the U.S. equity market, we would expect to see intra-index correlations between securities go to one, as they all move together.

The following chart shows the average correlation between securities in the S&P 500 Index over the last 16 years. There does not appear to be a discernable pattern that correlates with the increase in passive investing. 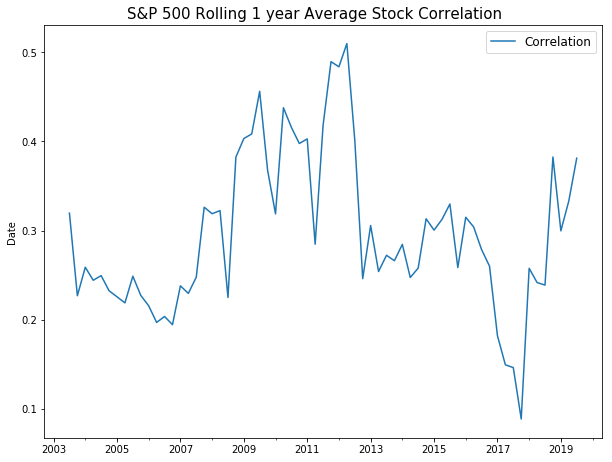 This leads to our second point: Passive investing can only perpetuate bubbles if it is the overwhelming majority of the market.

While this is not currently the case, another consideration is that active managers do have an incentive to limit the amount of risk they take on by deviating from their benchmark. So, even though actively managed funds might represent a large portion of the market, their ability to change relative pricing might be limited by risk constraints.

While there are few observations of sizable selloffs since the large shift to passive, a couple points can be made. First, if investors switch out of equities and into another asset class such as cash, selling passive investments will proportionally sell the same amount of every security in the index. Given that the securities are weighted by their market-cap, it should not cause an outsized impact on any security relative to another (assuming liquidity is approximately linear to market-cap). Second, if a specific set of securities is reweighted by active investors, the index will automatically adjust, and passive funds will not need to trade.

This leads us to our third point: The one possibility that could make selloffs worse is if institutional and retail investors were more likely to panic and sell if they hold passive funds.

Now we can address if passive investing has helped drive the mega-cap outperformance and if a bubble can be identified.

We start by looking at the valuation of companies across the market cap spectrum by using sales to market value as a simple gauge of the fundamental value of a company. This metric is not susceptible to accounting manipulations and can give us a rough gauge of valuation changes over time. We focus on the following U.S. indices: S&P 500®, Russell 1000®, Russell 1000® less S&P 500 as mid-cap proxy, Russell 2000®, top 50 stocks by market cap, and top 10 stocks by market cap relative to the Russell 3000® Index, which covers approximately 98% of the U.S. market capitalization. 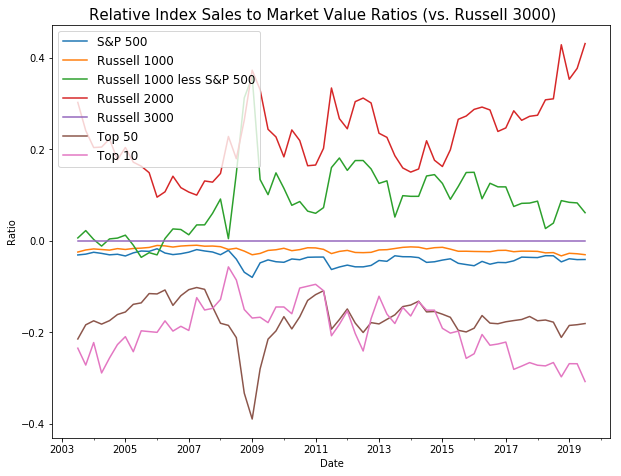 From observing the trends, it is possible that there could be a relative mega-cap bubble based on this simple valuation metric. Since 2015, the percentage of the U.S. equity market attributable to the top 10 stocks has increased significantly, as the performance difference between the largest and smallest stocks has significantly widened (see charts below). 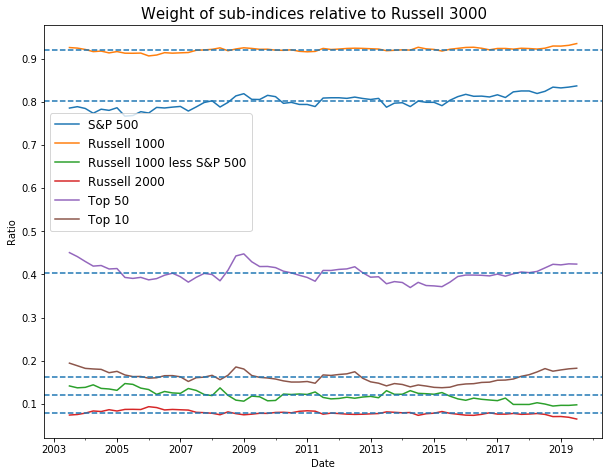 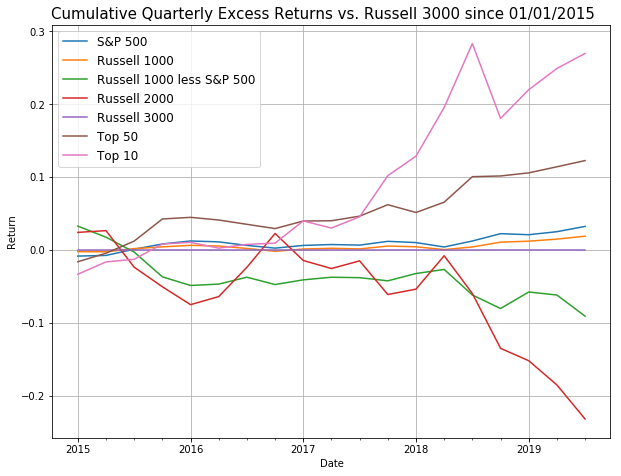 While it is possible there could be a bubble in the mega-cap names, based on what we have established as the mechanisms of passive investing:

This implies that now could be a better time than ever to employ active management with a long-term valuation discipline.

Passive investing is in many ways analogous to the modern mature retail market in the U.S. We can confidently walk into Costco or many other retail locations and buy without worrying about getting a bad deal. 100 years ago, we would have needed to be active price hagglers to make sure we put in the effort to discover and negotiate a good price.

In other words, we can be passive shoppers because the market is so efficient, due to easily sourced information and a small efficient group of active shoppers setting prices. That is a great benefit to society. However, in situations when active investors have distorted prices to such an extent that a bubble has formed, it can be a good time to find active managers with long-term discipline to go against the crowd and take advantage of market mispricing.