Global share markets fell in local currency terms in the September quarter but a weakening New Zealand dollar (NZD) meant that they rose in NZD terms, with the MSCI ACWI Index - Net returning 2.4%.

Much of the decline was driven by further, aggressive central bank activity globally and growing recession fears. In the US, the Federal Reserve (Fed) raised interest rates twice over the period after inflation climbed to 8.3% in the 12 months to 31 August. The Fed lifted rates by 0.75% at each of its two scheduled meetings during the quarter, taking its benchmark fed funds rate to a range of between 3.00% and 3.25% – its highest level since 2008. Speaking at the Fed’s press conference following its most recent rate hike, chairman Jerome Powell reaffirmed his determination to rein in inflation and made clear that interest rates will continue to rise until price stability is restored; even if it means tipping the world’s largest economy into recession. Elsewhere, rising consumer prices in the euro-zone saw the European Central Bank (ECB) deliver its first rate hike in 11 years in July; the Bank lifting its main refinancing rate by 0.50%. The ECB followed this up with a further, unprecedented 0.75% increase in early September. Meanwhile, the Bank of England raised rates twice over the period and warned of steeper rate hikes ahead after UK inflation hit double figures in July. Stocks were also impacted by ongoing geopolitical risks and disappointing Chinese growth. Limiting the decline was a series of encouraging US and European earnings updates, which is to say that results were not as bad as many first feared, and further merger and acquisition activity.

The New Zealand share market made relatively good gains in the second quarter, returning 2.2%5. Stocks performed very well through the early part of the period amid hopes that inflation may be peaking and a series of better-than-expected domestic earnings updates. Stocks also benefited from a strong rebound in domestic growth, with the local economy expanding 1.7% in the June quarter. The outcome, which follows the 0.2% contraction we saw in the March quarter, easily beat analysts’ expectations of 1.0% growth. Limiting the advance were a further two rate hikes from the Reserve Bank of New Zealand (RBNZ) and a sharp selloff in global share markets toward the end of the quarter. At the sector level, consumer staples was the best performer, followed by communication services and utilities. Industrials also performed well, while information technology and consumer discretionary recorded sizable declines.

Australian shares made reasonable gains over the period, returning 0.5%6. The gains came despite the Reserve Bank of Australia lifting interest rates three times over the period as it tries to curb rising inflation; investors betting instead that the Bank may need to slow the pace at which it tightens monetary policy if growth slows too quickly. The market also benefited from good gains across the ‘Big Four’ banks and a series of encouraging company updates. Limiting the advance were rising interest rates globally, weakness across the major miners and disappointing Chinese growth.

Global listed property was weaker in the September quarter, falling 10.5%7 in hedged NZD terms. Similar to the broader global equity market, property stocks were impacted by rising interest rates and recession fears, as well as higher bond yields. The UK was the worst performer after bond yields there spiked in response to the new Truss government’s proposed fiscal policies. Continental Europe, Australia, Asia Pacific ex Japan and North America were also weaker. In terms of sectors, US specialty and data centre names posted the biggest losses.

The global listed infrastructure market was also weaker, returning -7.3%8 in hedged NZD terms. Infrastructure stocks were impacted in part by rising bond yields and the ongoing fallout from Russia’s invasion of Ukraine. Asia Pacific ex Japan, North America and the UK all posted steep declines for the quarter, while Japan recorded relatively strong gains. At the sector level, gas utilities, marine ports and water utilities were amongst the worst performers, while energy posted a more modest decline. 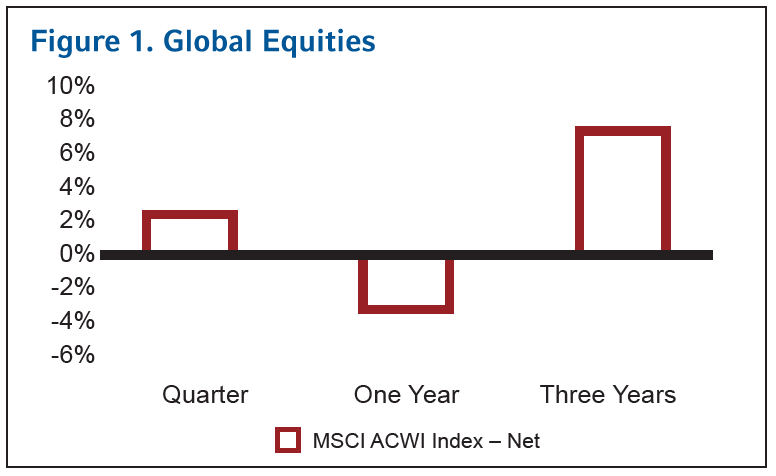 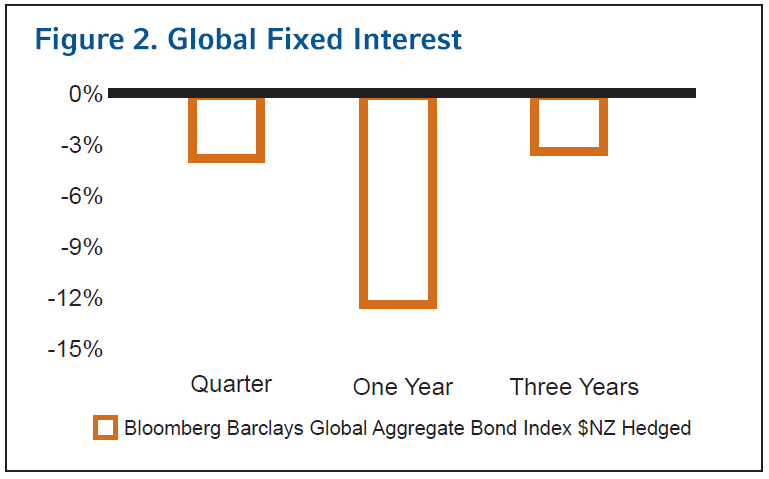 The New Zealand Trade-Weighted Index11 fell 2.7% over the quarter, driven in part by tighter monetary policy globally, further commodity price weakness and disappointing Chinese growth. The NZD was also impacted by general US dollar (USD) strength. Limiting the currency’s decline were multiple domestic rate hikes (and expectations of more to come). The NZD fell 7.7% against the USD, 2.5% against the Australian dollar, 2.3% against the Japanese yen and 2.0% against the euro. It gained a modest 0.1% against the British pound.

Note: all returns are in local currencies unless otherwise stated 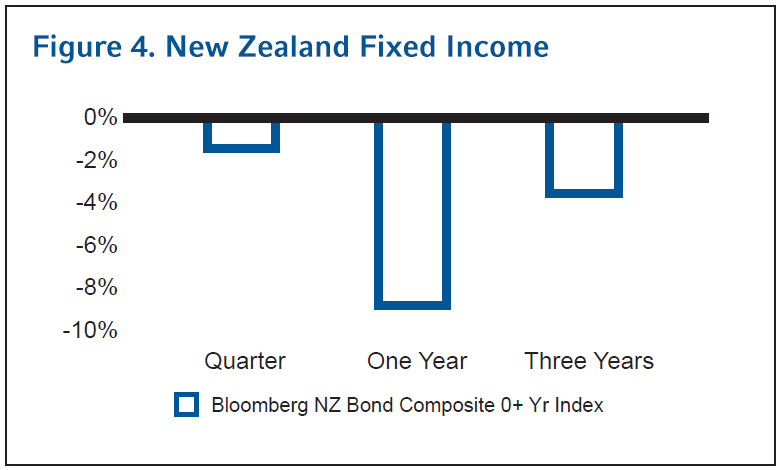 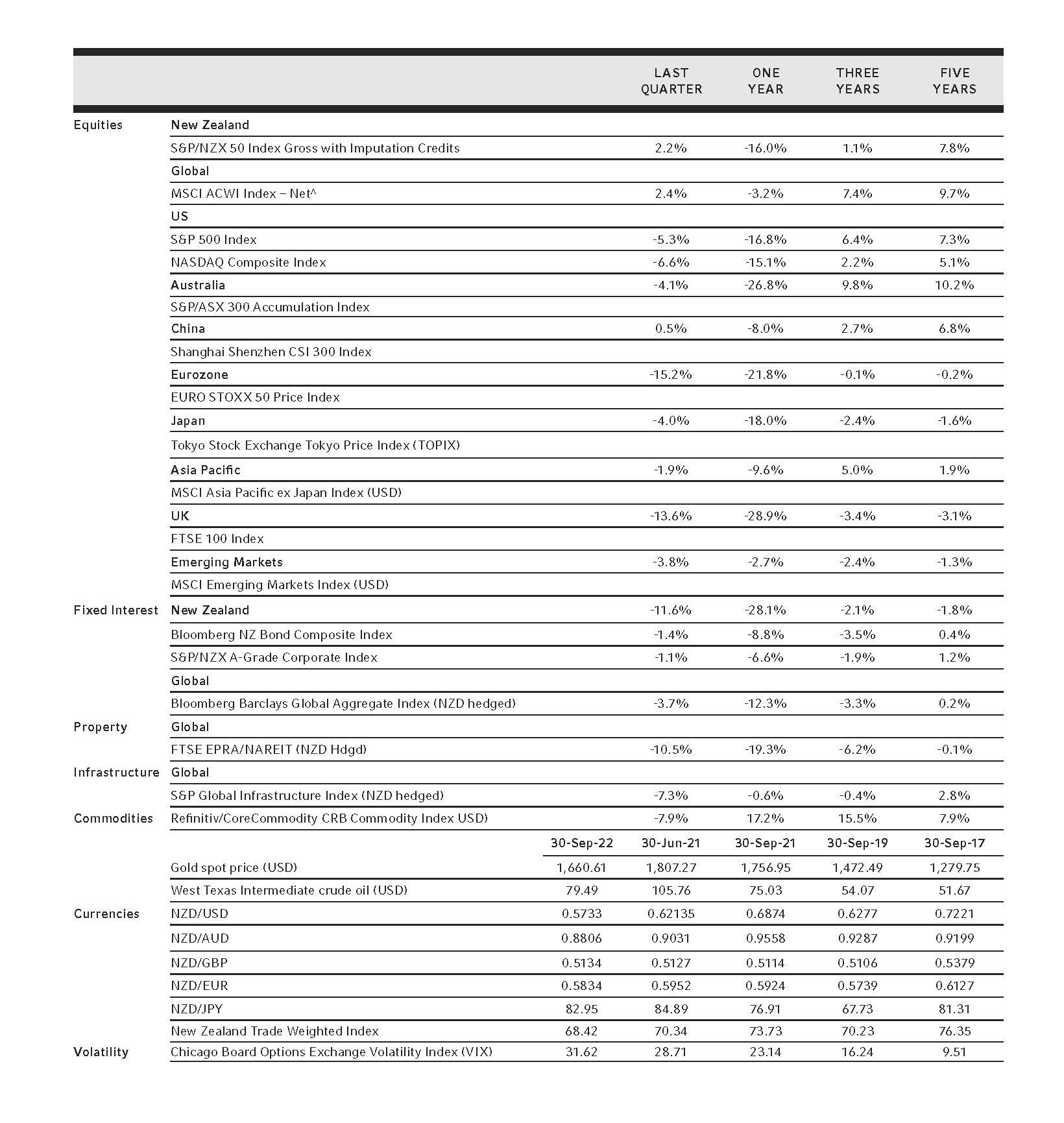