With the changing of the U.S. administration, it might be surprising to see that there hasn’t been any meaningful change in the China-U.S. tensions. However, we noted after the U.S. presidential election that we didn’t think we would see a significant de-escalation in tensions—and we are still of that view.

Starting from the top, the underlying issues between the United States and China are very challenging—and the trade deal that was agreed upon in 2019 only scratched the surface in terms of addressing them. The Phase One trade deal is currently being reviewed by the Biden administration —and whilst Chinese purchases have not met the agreed-upon amounts, we think it likely that the agreement will remain intact.

Before getting into how the risks between the world’s two largest economies have evolved, it is important to note that the two sides met recently—although nothing of real substance emerged, other than rhetoric around the importance of the relationship and an agreement to keep negotiating. We are marginally encouraged by the recent climate agreement between the two parties, but do not think that tensions are going to significantly fall.

To the extent that we might not see tariffs and similar measures used as negotiating tactic, perhaps. The Biden administration has noted that it thinks there are other routes for negotiation which are more fruitful—and it’s important to note that we are in the early stages of an economic recovery. Adding another headwind would be unwise at this point in time.

That said, the elevated tensions that we currently observe are likely to stay with us through Biden’s term. President Biden is currently reviewing the U.S. trade policy toward China and has delayed his final decision. The key watchpoint for how the relationship will evolve will be the administration’s decision on technology. There have been comments around the potential for a full blockade on technology (namely, semiconductors), which we think is a low probability event but would have high impact.

The other thing that we can expect from the Biden presidency is a return to a multilateral approach to foreign relations, rather than the unilateral path that former U.S. President Donald Trump pursued. This means that developments are likely to be slower in pace.  With that in mind, we are closely monitoring the current stoush between Europe and China on the proposed investment deal, as well as the discussions at the OECD about digital taxes (as this could cause a rift between the United States and some European countries, namely France).

An escalation of tensions would lead to an increase in market volatility, given the shock to growth that it would represent. We would expect that market reaction would be like the movements we saw through 2018 and 2019—which were a fall in bond yields, tumbling equity markets and a strengthening of the US dollar and the yen. Research from the Federal Reserve has shown that U.S. announcements had the most impact on equity prices, with news of Chinese retaliation having a lesser impact.

We have annotated the tariff announcements from 2018 and 2019 against our indicator in the chart below. While the market today is showing more signs of complacency than we saw during this period, it’s important to note that we are still not at extreme levels.

However, this does suggest that the market could be slightly more vulnerable to a surprise in the China-U.S. relationship, although we would expect that the impact would be short lived given the very supportive economic backdrop that the global economy is currently experiencing. 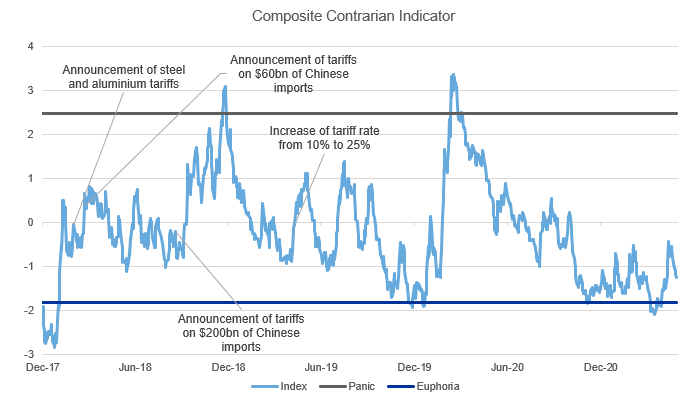 We’ll continue to keep you apprised of any new developments in China-U.S. relations through the Russell Investments blog and our Market Week in Review podcasts, which are produced on a weekly basis. You can subscribe here.