New businesses, where art thou?

In last December’s blog post on potential investment themes for 2022, we highlighted the surge in new business registrations in the United States and Europe as something to watch this year. With many economists pointing to low business dynamism as one of the explanations for lousy productivity growth since the Global Financial Crisis, we wondered if this emerging dynamic could provide the boost that the global economy needs.

So far, we have not seen any impact on productivity numbers (which have been very weak)—but that is to be expected, given it takes time for new businesses to expand and reach economies of scale. However, given the low population growth that is expected to continue in many parts of the world, productivity is a really important piece of the economic growth puzzle.

Let’s start with the basics, though. First on the list: where in particular are all these new businesses cropping up?

Quite frankly, new business creation is occurring in many parts of the world. Data from the OECD (Organization for Economic Co-operation and Development) demonstrates that the rapid increase in new business creation has been widespread, as shown in the chart below. We have observed new businesses being created at an annual growth rate greater than 15% since the start of the COVID-19 pandemic in Canada, France, Japan and the United States. The Economist estimates that this equates to nearly one million new businesses globally, compared to pre-pandemic trends.

Before looking at the sectors that these businesses have been created in, here’s a quick primer on what influences productivity. There are three key factors: an improvement in human capital (i.e., education and skill development), capital deepening (more machines per worker) and innovation. The mechanism through which we would expect business creation to flow through to productivity is largely through innovation—new businesses may have more ability to test new ideas, and if successful, can lure capital away from firms that are less dynamic.

Which sectors are seeing the greatest influx of new businesses?

Let’s move on to sector composition by taking a look at comprehensive data from both the United States and France. 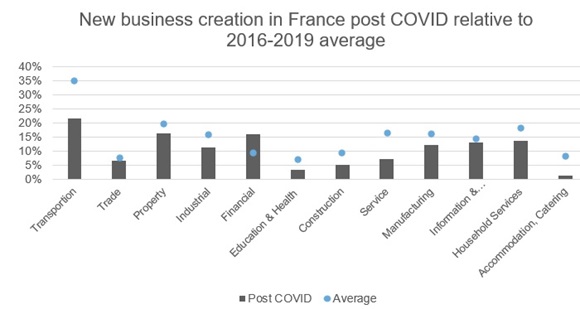 In the United States, the Federal Reserve1 recently analyzed the proliferation of new business. The below chart on the right shows that every sector has seen faster business application and establishment births than the 2019 pace, with both leisure & hospitality and transportation & warehousing seeing the fastest increase in pace. Similar to the situation in France, some of these sectors are typically harder to improve productivity, but it is notable that both information and professional & business services—which are more conducive to potential innovation—have also seen a sizable increase in business applications.

What’s behind the rise in new business formation?

Taking a step back, it is worth considering why there has been such a surge in new businesses. We think there are likely three key reasons.

The first is that many households found themselves in a very healthy financial situation during COVID-19, due to a combination of stimulus payments and lower expenses as a result of government-mandated stay-at-home orders. This provided a buffer to take a risk and start a business. The second reason is that the pandemic may have provided people with more time to reassess their lives. Third, the pandemic could likely have reaccelerated economic reallocation. For example, during the times when stay-at-home orders were in place, there was less incentive to open restaurants—but conversely, increased incentive to opt for some form of online business.

It is important to note that the combination of stay-at-home orders and the improved financial situation also was a catalyst for increased participation in financial markets—whether in equity markets or cryptocurrency markets. Additionally, amongst younger cohorts, the concept of side hustles has increased, with a recent Morgan Stanley survey noting a sizeable proportion of Generation Z have some form of secondary income (whether it be online selling, trading financial assets or even gaming). Given the volatility of financial markets—especially cryptocurrencies—in recent months, as well as the highly asymmetric distribution of earnings in some of those online ventures, it seems unlikely that these ventures will lead to individuals leaving the labor market.

Ultimately, the sectoral composition of this surge in new business listings suggests that the productivity boost may not be as positive as headlines indicate. In particular, we suspect that some of the anecdotes around younger people looking to leave traditional employment for side hustles are exaggerated. However, there are arguably more encouraging signs coming out of the United States compared to France. We’ll continue to monitor this trend as the year progresses.