What is the tax-cost ratio and why does it matter?

A topic that has been frequently making headlines lately has been the increase in the prices of various goods and services. Whether it is the cost of a house, new car or groceries, everyone seems to be paying more attention to prices in an attempt to not pay more than necessary.

This has also been an issue in the investing world. In recent years individuals have become more focused on controlling costs within their portfolios. When investment costs are considered, it is common to only consider trading costs, expense ratios and advisory fees. This is because these types of costs are typically easy to determine, known in advance and straightforward to measure. Yet for taxable investors there is often another hidden cost that can be just as significant (if not more) than all these other costs combined. Although it's something not often talked about or even considered, the cost of taxes on an investment can create a significant drag on its returns and represent the single largest cost in an investor's portfolio.

What is the tax-cost ratio?

The tax-cost ratio is how Morningstar measures how much a fund’s annualized return is reduced by the taxes investors pay on distributions. Morningstar calculates it on products such as mutual funds and Exchange Traded Funds (ETFs). Generally, for taxable investors the more distributions a fund makes, the larger the tax-cost ratio will be, meaning a larger amount of return is lost to taxes. We call it "tax drag."

Though the tax-cost ratio is not commonly discussed or even thought of for many investors, this tax drag can be large and represents an additional headwind to after-tax investment results. As shown below, when compared to the average expense ratio across U.S. large cap, U.S. small cap and fixed income funds, the average tax drag over the last three years has been around 1.5 to 2 times greater than the average expense ratio. The numbers below suggest that investors in either U.S. large cap or U.S. small cap equities lost roughly 1.8% of return per year to taxes (as of September), while fixed income investors have lost nearly 1.3%. Although these numbers may be somewhat hidden for most investors, they unfortunately can have a very real impact on investment results.

Where does the tax-cost ratio come from?

As referenced earlier, the tax-cost ratio primarily comes from taxes owed on distributions such as dividends or capital gains that are paid to a fund’s shareholders. A high tax-cost ratio may be the result of a fund that has regularly paid out large amounts of dividend income or may be using an investment strategy that results in frequent capital gain distributions. However, it is important to realize that in the eyes of the Internal Revenue Service (IRS), not all distributions are equal. Different types of distributions may be taxed at different rates.

As shown below, there are three general buckets these rates can fall into. The worst bucket from a tax perspective consists of non-qualified dividends, short-term capital gains and interest income. These distributions get taxed as ordinary income and can carry a top tax rate of 40.8% (including the net investment income tax). Qualified dividends and long-term capital gains receive a more favorable top tax rate of just 23.8% (also including the net investment income tax). Lastly and most preferred from a tax perspective would be a rate of 0%, which generally applies to municipal bond interest and unrealized capital appreciation.

Given the range of tax rates that can be applied, clearly a fund making a $1 distribution consisting only of qualified dividends would have less tax impact than a fund making a $1 distribution of short-term capital gains. Understanding the different types of tax rates that may be applied can go a long way in terms of positioning portfolios for greater tax efficiency. 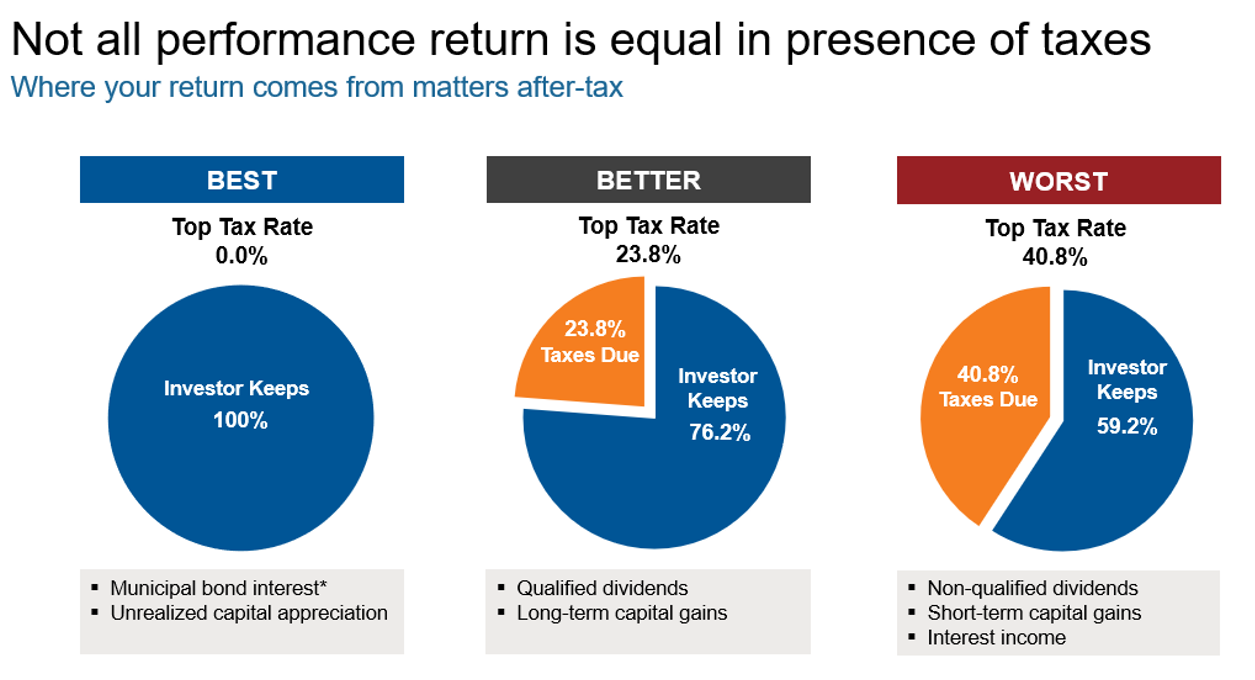 Why does the tax-cost ratio matter?

As with any other cost, the tax-cost ratio has the potential to have a negative impact on investment performance. Considering the typical tax cost for most Morningstar category averages falls in the 1%-2% range, this can detract from positive returns or can make negative returns even worse. For example, over the last five years U.S. equity funds have returned an average of 6.4% per year. But a tax-cost ratio of 2.1% per year means investors would have surrendered nearly one-third of their total return to taxes.

Alternatively, over the same period, returns from international equity and fixed income funds have generally been flat on a pre-tax basis meaning that with the tax-cost ratio included, the after-tax results could have been negative. The impact this can have is illustrated below. Over the last five years a balanced portfolio consisting of 30% US equities, 20% international equities and 50% fixed income would have given up nearly the entire pre-tax return of 1.9% to taxes and delivered just 0.3% after accounting for this tax drag. 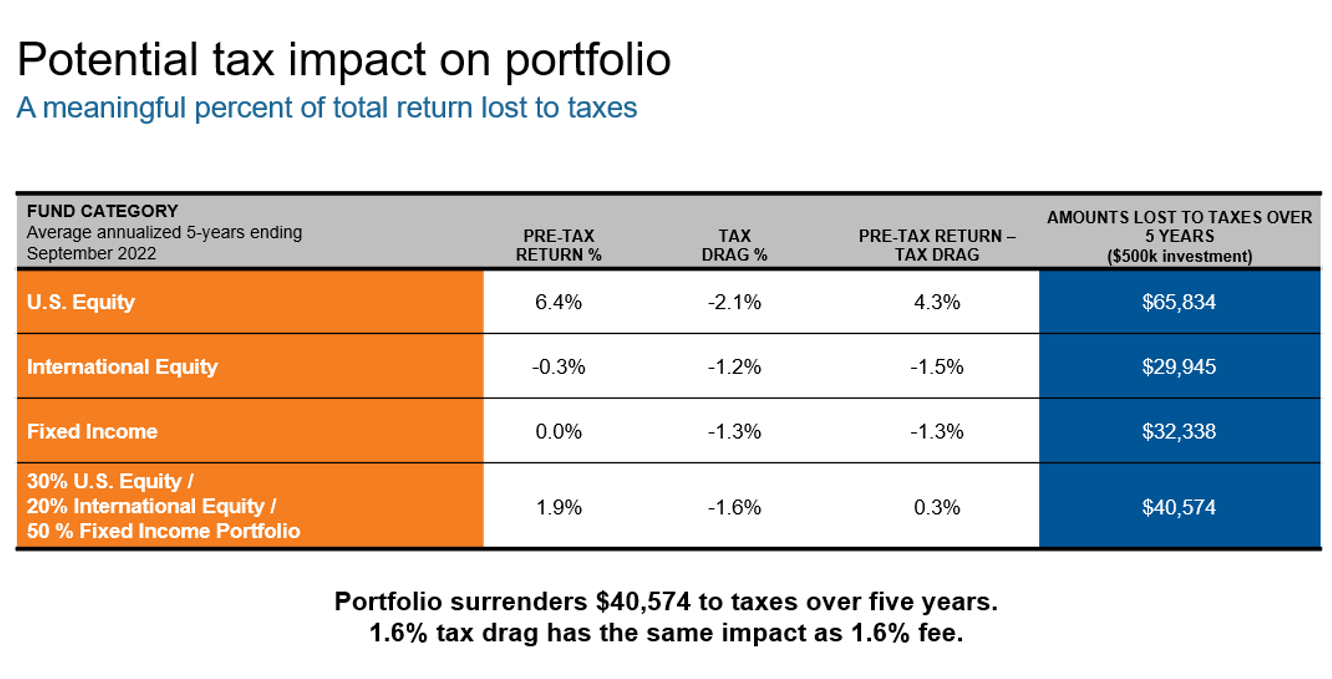 If not properly managed, the tax-cost ratio can be a significant drag on investment performance. Knowing how to find, evaluate and compare tax-cost ratios – such as with the Russell Investment’s Tax Impact Comparison Tool - can provide valuable insight into the level of a fund's tax efficiency and which funds may be managed with tax considerations in mind. Nobody enjoys paying higher costs than they need to. Being proactive and making investment decisions that lead to reduced taxes can put investors in control and lead to better after-tax outcomes.