Editor’s note: This blog has been updated following the latest news.

Events have moved quickly in Italy, with the Lega (League) / 5-Star Movement (M5S) coalition government now approved by President Mattarella and due to be sworn in this afternoon. Guiseppe Conte will be prime minister with M5S leader Di Maio and League leader Salvini as deputy prime ministers. The contentious proposed Minister of Finance, Paolo Savona, has been relegated to the less important position of European Affairs ministers and his replacement is Giovanni Tria. At first glance, Tria appears more moderate than Savona, but he too has in the past complained about the strictures of the euro.

Financial markets, such as the STOXX® Europe 600 index—which closed 1% higher on June 1 than May 31—generally have reacted with relief as the forming of a government removes the risk and uncertainty of new election. In particular, it has lowered the risk of a near-term election as a quasi-referendum on eurozone membership.

That said, with respect to both Tria’s room for manuevering as well as the fiscal plans, we continue to focus on constraints versus preferences. The constraints posed by President Mattarella and financial markets have shown themselves to be formidable. From that perspective, we expect a lot of the fiscal plans will be either abandoned or scaled back. If we are right, the deal to form a government might be the start of a reversal in sentiment and value, i.e. the start of a move from oversold and cheap to more neutral levels.

In that light, our preference is to increase exposure to Italian assets (or eurozone financials) and take a small overweight position. There is still a lot of risk on the cycle front, but with a government in place, we believe investing at current levels may give a positive skew in future returns.

We believe that the risk to Italy’s membership in the eurozone is limited. The euro still has the support of roughly 60% of Italians1 and both Lega and M5S have noticeably toned down their euroskepticism. President Mattarella is clearly trying to protect Italy against anti-euro moves.

For now, we have a coalition government of M5S and Lega. Of course, this can change quickly given the volatility of Italian politics. We believe that neither the Democratic Party (PD) or Forza Italia should be discounted. However, for now we are focusing on what a coalition with Lega and M5S will get done as opposed to what they want they do. We continue to believe that the constraints imposed by both President Mattarella and financial markets will force a new government to tone down its fiscal plans significantly.

We believe that the ECB might have an important role to play if things worsen significantly from here. At that point, we believe it will have to assess the situation and determine whether the risk to the eurozone is such that it needs to provide support – or whether it needs to teach Italy a lesson. Given Italy’s importance and size, we suspect it will choose the former and provide support to specific banks using Emergency Liquidity Assistance (ELA). Or, it may be via the financial system in general through new LTROs (long-term refinancing options) and an extended quantitative easing program. However, we only expect this to happen if Italy slides into a crisis that threatens the eurozone’s overall recovery.

The risk of a doom-loop (i.e., where increased sovereign risk weighs on the banking sector and starts a vicious downward cycle) is real, but not as large many fear. Italian banks are, by and large, quite well capitalized, and it would take a very big decline in government bond prices before they would be at risk of insolvency.

What’s in the cards for financial markets?

From valuation and sentiment perspective, we believe Italian bonds are still cheap and oversold, but less so after the relief rally, particularly at shorter durations. On the other side of the equation, we believe German Bunds are now overbought and expensive. Italian equities have only recently pushed into oversold territory and are not yet considered particularly cheap. The Italian yield curve has flattened dramatically over the past few days and weeks, which shows that the market is particularly worried about the next two years (see chart below). 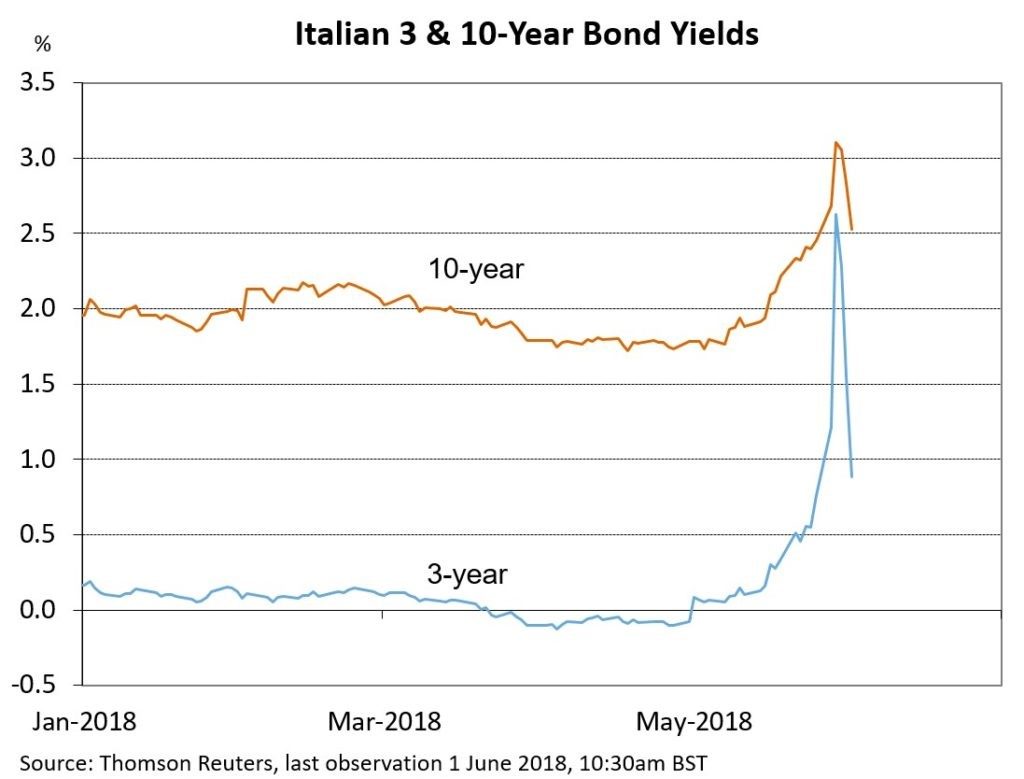 The euro at 1.15 vs the U.S. dollar (per the U.S. Dollar Index, as of May 31, 2018) has again proven to be a strong support level. The euro is cheap and oversold. There are still a lot of cycle risks, but current levels now look attractive.

We believe political risks have eased, for now at least. This incrementally improves the outlook for our cycle score. Combined, our Cycle Value Sentiment (CVS) building blocks are more positive, supporting a modestly constructive view on Italian assets.