The volatility of the cross-currency basis was a point of focus throughout March and April, swinging wildly in either direction as funding stresses surfaced. A scramble for liquidity and dollars was, with impressive effectiveness, ultimately satiated by the handiwork of central banks, most notably the U.S. Federal Reserve’s flooding the monetary system with the pre-eminent reserve currency. The effectiveness and lasting impact of these actions became visible in Libor-OIS spreads,1 cross-currency bases and the withdrawal in central bank take-up of U.S. dollar swap lines.

While funding markets appear to be stable, the global economy remains in a precarious place. The U.S. presidential election is around the corner. The world’s geopolitical temperature is by no means cool and currency markets are still trying to figure out where we are headed. It is still important for investors hedging currency risk to remain aware of the cross-currency basis as a cost (or benefit) of hedging. It continues to have the propensity to move sharply.

March of 2020 was unequivocally a liquidity event. The veracity of virus contagion initiated widespread selling of risky assets and a vicious rise in cross-asset correlations. Around the globe, investors demanded U.S. dollars, both for the safe-haven property and for dollar liabilities coverage. Liquidity was scant and credit risk sensitivity was elevated—panic had struck. As is usually the case, money market tightening crept into other funding markets, including cross-currency basis swaps and by extension other currency derivatives. Most non-U.S. investors hedging U.S. dollar assets were inflicted with a sharp adverse spike in basis, given the underlying structural funding supply and demand dynamics. 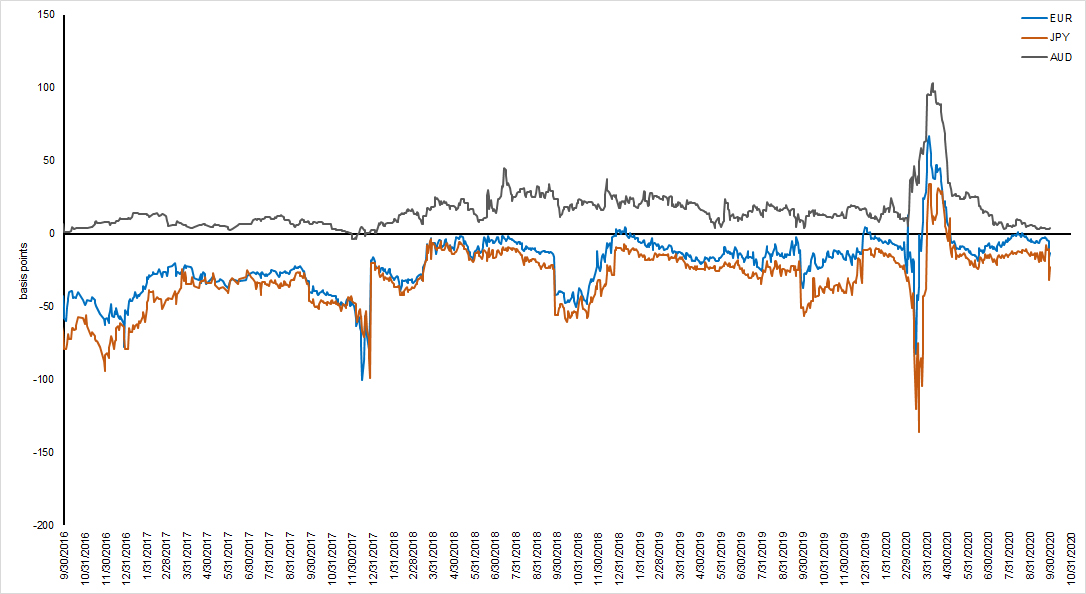 Episodic spikes in the basis have occurred several times since the Global Financial Crisis (GFC), the aftermath of which resulted in regulators worldwide instituting forceful reforms (e.g., Basel III, Basel Committee on Banking Supervision). It is, in fact, partly due to those same reforms that these episodes have occurred. Pressure on banks to improve conduct and hold more capital meant that the regulatory capital requirements of certain instruments on banks’ books became consequential. Seemingly erratic behavior in the basis, over quarter- and year-end periods, has been underpinned by banks’ efforts to reign in their leverage ratios (comprising on- and off-balance sheet risks) in order to satisfy regulations.

Some investors and currency managers have thus tried to transact ahead of key periods (especially year-end), or altogether side-step them, in an attempt to eliminate rollover risk by avoiding a December settlement date. Some opportunism has also been highlighted in the cross-currency basis swap space for certain regions, particularly Australia where an upward sloping basis term structure was used by investors—for example the Reserve Bank of Australia—to generate additional returns.

The basis tumult through March and April was not a product of regulation. An evacuation from risk, sparked by existential fear, created a liquidity event. The lender of last resort was needed and acted expeditiously. The U.S. central bank opened swap lines and repo facilities with various trading partners, backstopped the gridlocked credit markets and conducted quantitative easing, among a plethora of other initiatives. It was not alone, as other central banks unleashed liquidity into domestic markets.

The take-up in the U.S. dollar liquidity swaps was tremendous (see Figure 3). While investors remained trepidatious, funding markets stabilized in the ensuing weeks and months. The cross-currency basis and Libor-OIS spreads compressed back to more normal readings (see Figure 1 and Figure 2) and eligible central banks renewed gradually lower amounts of USD swaps with the Federal Reserve (the Fed). 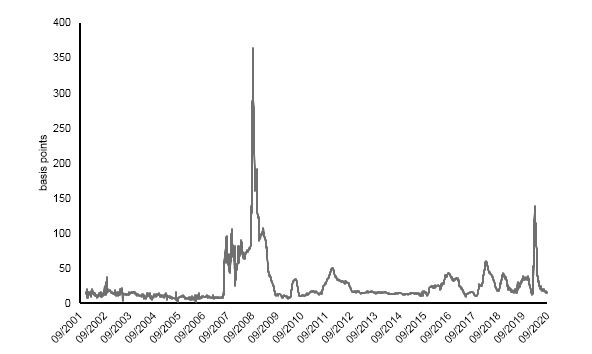 As indicators show, volatility in the basis has settled. 2018 and 2019 saw euro basis gap down to around -40 basis points in the month of September. In 2020, while the basis did widen in the same direction at the end of September, it troughed at a much more muted level of around -16 basis points. The prospect of funding stresses re-emerging has not completely dissipated. But the Fed always has a choice—that is to be the domestic lender of last resort or the dollar lender of last resort. Adopting a position in the latter is not out of pure magnanimity. Instead, there is the recognition that instability in the Eurodollar market can be problematic through contagion. Costs and opportunities shall remain for investors, but for the time being, Fed support is in place.

Most certainly, the U.S. central bank will vigorously want to avoid derailing a fragile economic recovery. With regard to the year-end turn, when the currency basis has in some previous years skyrocketed, a quieter transition from 2020 to 2021 would be welcome. Signs are promising that it will be a more benign year-end. The Fed recently extended its ban on bank share buy-backs, which means that banks will have plenty of excess capital and low yielding reserve assets into early 2021.2 This should incentivize U.S. banks to lend their excess dollars in the FX swap market, keeping the currency basis in calmer waters around the turn of the year.