DB contributions expected to plummet in 2019

Observing the latest developments of the largest corporate defined benefit (DB) plans in the U.S. offers a glimpse into the DB industry, and perhaps a foreshadowing of things to come. After two of the strongest years ever for pension contributions, the coming year may feature the weakest seen in a generation. If the annual filings just posted for the largest U.S. listed corporate plan sponsors are any indication, the recent boom in new cash coming into DB plans between 2017 and 2018 will lead to a bust in 2019 and perhaps even 2020. It may take a few years before contributions start ticking up again.

The chart below shows the trend in contributions (bars) among these sponsors since 2005, plotted alongside funded status percentage (line). The contribution roller coaster ride was mostly driven by changes in funding requirements as funded status deteriorated after the financial crisis (higher contributions from 2009-2013), then funding relief eased the burden (especially 2014-2016). But an entirely new factor came into play in 2017. Although funding requirements remained low, sponsors took advantage of a window of opportunity to accelerate contributions under a higher tax deduction. With that window now closed, the 2019 estimates have fallen over 75% from their 2017 high. 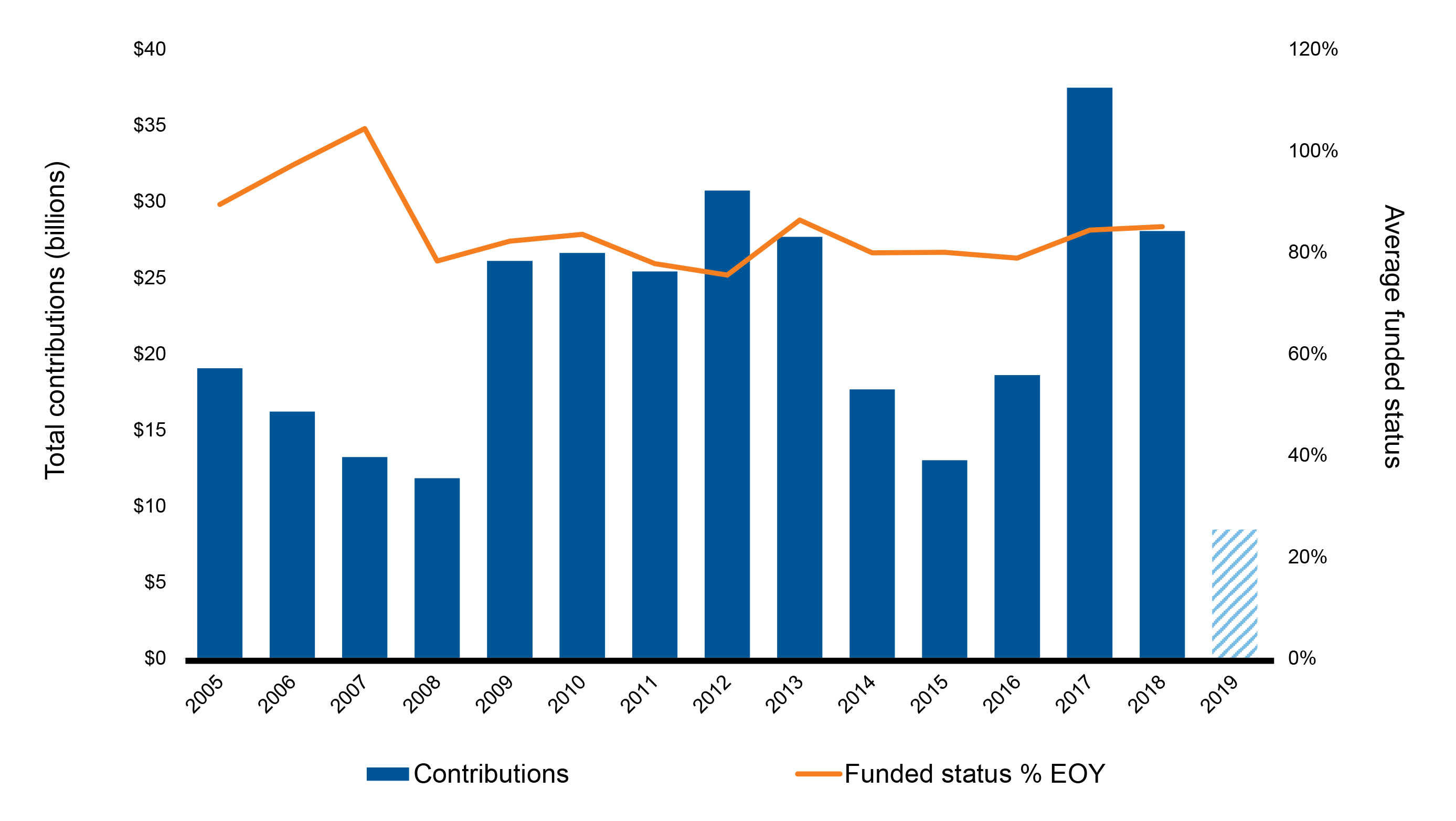 Other factors motivated the decision for discretionary contributions in 2017 and 2018, though in a decidedly smaller way. PBGC premiums have been skyrocketing for several years now, and a better funded status reduces the variable portion of that premium. Also, these sponsors are aware they will need to fund up their underfunded plans eventually, and contributing now helps to ease future contribution requirements. But the key motivator was tax reform, which was passed in December of 2017.

The Tax Cuts and Jobs Act of 2017 reduced the highest corporate tax rates from 35% to 21% starting in 2018. Reducing corporate tax rates frees up capital for other corporate expenditures, but it also lessens the tax break available for qualified retirement plan contributions. For a calendar year plan, this window was set to close on September 15, 2018. Contributions placed before that time could be attributed to the 2017 plan year, when tax rates were higher.

A multitude of sponsors took advantage. Many in fact started contributing at high levels before the tax law became final, in anticipation of the change. They contributed even though few of these massive DB plan sponsors had any contribution requirements in their U.S. plans, and many do not anticipate them for a few more years.

The anticipated $8.5 billion contribution in 2019 for these 20 companies (which incidentally is not much higher than the $6.8 billion contribution by a single company – GE – last year), could be higher than expected. Many sponsors still seek to fund up their plans quickly, and there are advantages to contributing to the plan, but there is no obvious catalyst for contribution levels like we have seen the last couple years.

In other developments for this group, funded ratios mostly stayed the same, with rising discount rates offsetting the effect of depressed asset values. Both assets and liabilities fell during the year, which reduced the funding deficit in dollar terms. We also saw some new M&A activity and a couple major risk transfer transactions. Access the full $20 billion club report, here.

Tax Reform has been signed–what could this mean for DB plan sponsors?