We expected a big year for pension contributions, but we didn’t think it would be this big. The 20 members of the $20 billion club, representing 40% of the global DB liabilities among US-listed corporations, didn’t just add on to 2016 contribution totals, they doubled them. They nearly tripled 2015 contributions. Combined with their highest recorded investment earnings, pension assets increased by around $85 billion for this group and offset a 45 bps drop in discount rates. This led to an average 5% improvement in funded ratio and $32 billion reduction in the funding deficit.

A record-breaking year in five ways

In a new paper, based on hot-off-the-press 10-k filings data, we detail the results of an intriguing year for the $20 billion club. At least five records were broken:

1. Contributions.
Looking back over the last decade, contributions jumped after the Global Financial Crisis in 2008 due to reduced funded status (and corresponding increase in funding requirements), then dropped several years later as Congress granted various versions of funding relief (which decreased funding requirements). Despite relatively stagnant funded status and no changes in funding laws (other than the ongoing effects of previous laws), 2017 is an anomaly, as shown in the chart below. The reasons for the abrupt increase were varied (e.g., PBGC premiums, improving funded status), but one rose to the surface: tax reform. While a new bill was not passed until late in in the year, some large DB sponsors accelerated contributions to maximize their tax deduction in good faith that the corporate tax rate would soon decline. 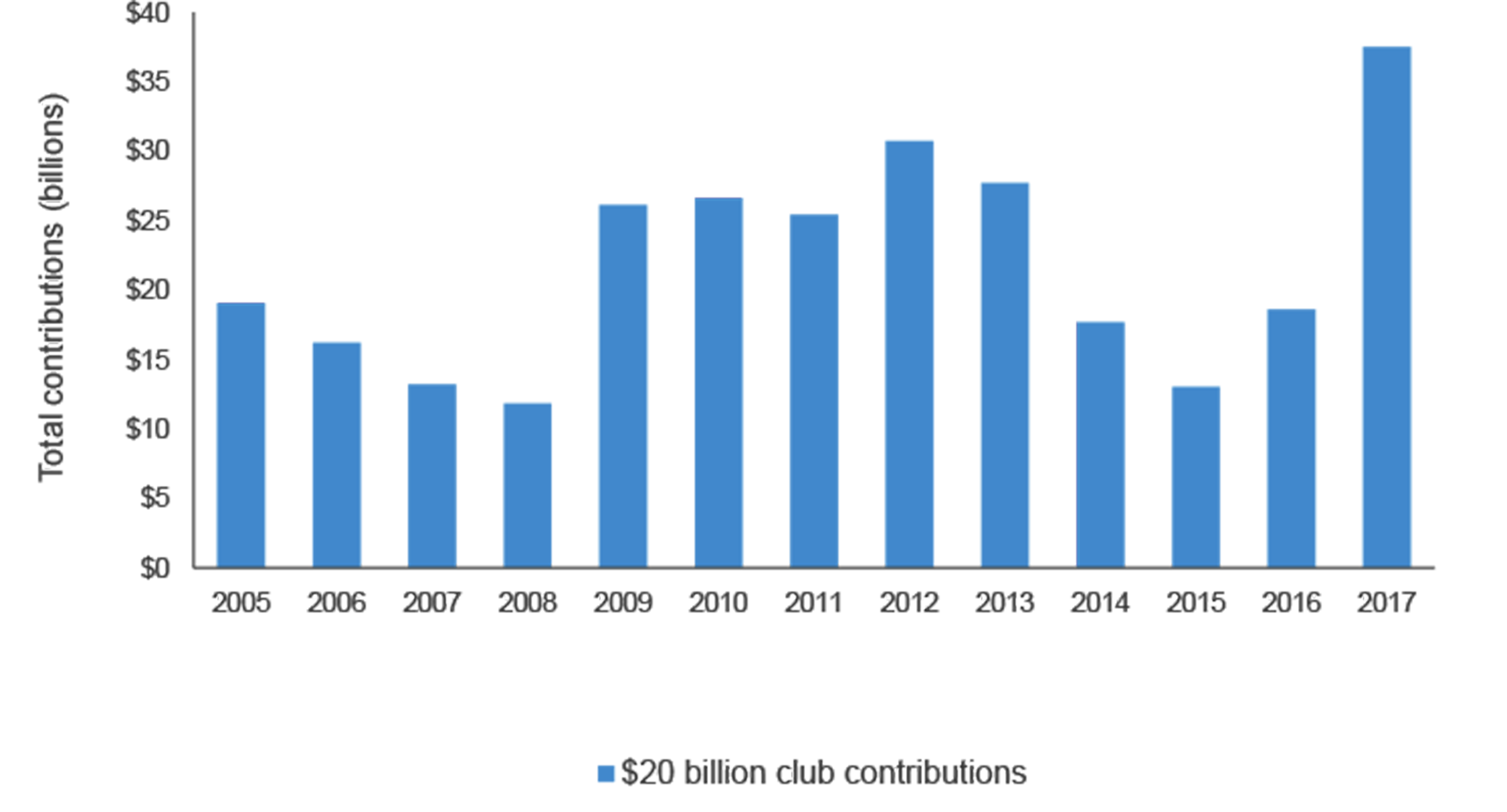 2. Investment earnings. Plan sponsors have benefited from cooperative markets over the last several years. Good earnings years have been common, but no individual year since 2005 has generated such a high return (in dollar rather than percent terms). The fact that many of these sponsors have shifted a significant portion of their assets to liability-hedging fixed income makes this even more noteworthy.

3. Discount rates. As mentioned, discount rates – based on the yields of high quality corporate bonds – dropped during 2017 by an average 45 bps to around 3.7%. The previous low was in 2012, when discount rates were around 4.0%.

4. Total liabilities. We first called “peak pension” – the high point for pension liabilities – shortly after 2012 due to a large drop in discount rates that year and anticipation of more big risk transfer deals like GM and Verizon. We later revised peak pension to be the end of 2014 due to another drop in rates, in combination with new, more conservative, mortality assumptions (both of which increased liabilities). It appears we again spoke too soon, as risk transfer transactions in this group have been minor relative to 2012, while rates have bottomed out again. Pension liabilities for this group are now around $975 billion (previous high was $956 billion). Will we see liabilities reach $1 trillion?

5. Total assets. Here is a record we expect to be broken. Pension assets for this group are now about $820 billion – the previous high was $765 billion. With an average funded status of about 84%, we hope to see assets continue to increase as sponsors strive for fully-funded plans.