January FOMC meeting: A pause, but (probably) not the end of the tightening cycle

Leading into today's Federal Open Market Committee (FOMC) decision, Chair Jerome Powell and a host of regional Federal Reserve (the Fed) bank presidents had unanimously expressed support for a pause in the Fed's tightening cycle. Even perma-hawk Esther George, from the Federal Reserve Bank of Kansas City, advocated for a cautious and patient approach to monetary policy in her speech a few weeks ago.1

In a press conference today following the conclusion of the FOMC meeting, Powell stuck to the script and emphasized the Fed is waiting patiently to see how the economy evolves. The January statement removed the reference to further gradual increases, scrapped the central bank's assessment that risks to the economic outlook are roughly balanced (hinting that they are skewing slightly to the downside now), and noted that inflationary pressures are muted. Translation: the Fed is on hold until at least June. The battery of dovish tweaks to the Fed's guidance was enough to lift U.S. equities in the minutes following the announcement.

The cause for the pause: Downside risks

It's important to remember that the cause for the pause is most likely about emergent downside risks to both the U.S. and global economic outlook. While the Fed still expects a strong economy in 2019, the recent volatility in financial markets, the slowing in global growth, and sharp declines in measures of U.S. consumer and business confidence have all eroded the central bank's conviction in that baseline somewhat. 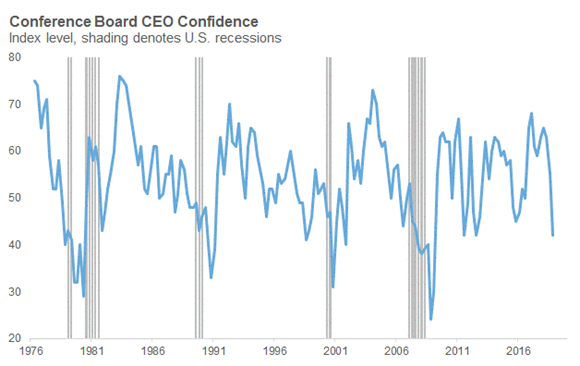 Source: The Conference Board


In our assessment, the catalysts for the sharp drop in business confidence and high-frequency business activity data are twofold:

The good news? The necessary policy responses seem to be falling into place to put a floor under the global economy:

Markets have grown hyper-focused about the Fed's balance sheet policy in recent months. It's important to stress, however, that the federal funds rate is the active and primary monetary policy tool. While Powell did express some flexibility on the Fed's balance sheet today, that flexibility is contingent on a meaningful change in economic circumstances. The way we'd translate the conditions that would warrant such a change are either:

If our baseline outlook is correct--that financial markets will steady, China and the global economy will stabilize and a tight labor market, coupled with accelerating wage inflation in the U.S., will exert some further upward pressure on consumer prices--we would view today's outcome as a pause, not the end of the Fed's tightening cycle.

Our baseline forecast calls for one interest-rate increase later this year, likely in September. We'd stress that there's a lot of dispersion around this projection--the Fed could cut rates if conditions continue to deteriorate, or it could raise rates up to three times this year if financial markets, the global economy and inflation all move higher in short order. Our net assessment is that the bond market has grown overly pessimistic, effectively pricing no more rate hikes during this current period of economic expansion. With that in mind, we expect the 10-year Treasury yield to gradually move up to around 3% over the next 12 months.