Will Democrats trying to pass tax increases this fall go for a full loaf? Half a loaf? Or could they end up with no loaf? This month we will see many discussions, proposals, counterproposals and quick analyses of potential tax changes to be passed this year in support of President Joe Biden’s $3.5 trillion spending bill.

President Biden campaigned on his intent to increase income tax rates for those making more than $400,000. During the campaign, he put forward some specific tax changes to support his policies. Now the rubber is about to hit the road to see what might actually pass.

The president is aiming for a bill with a target price tag of $3.5 trillion (T) to be spent over 10 years. The entire amount will not be spent in Year 1. Based on the recent budget resolution framework, the spending bill increases the budget by $1.75T with an additional $1.75T from incremental revenue and/or cost savings ($1.75 + $1.75 = $3.5T) The current tax debate is around finding the pay-fors related to the latter $1.75T.  The fewer pay-fors means less revenue and reduced policy ambitions. Giddy up!

How can they pass a tax increase?

Given the narrow majorities in both the Senate and the House, the only avenue for proposed tax increases is through the budget reconciliation process. 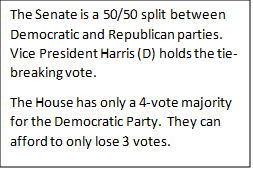 Budget reconciliation is not straightforward and involves an interesting legislative path with defined parliamentary procedures. A few key points:

Given these very narrow majorities, every member of Congress holds incredible sway over the outcome. We will undoubtedly hear the names of Senators Joe Manchin and Kyrsten Sinema, but it only takes one senator or three members of the House to alter any bill’s progress. And those who recall the election of Scott Brown to the U.S. Senate in 2010 know how quickly and unexpectedly narrow voting majorities can change.

What tax rates are in the crosshairs for investors?

Recall that then-candidate Biden campaigned on not raising taxes on anyone making less than $400,000. On Sept. 12, we gained more clarity from the Democratic members of the House Ways & Means Committee and Senate Finance Committees as specifics were released reflecting their thinking to achieve the required revenue.1 Again, this process is fast-moving and extremely fluid, but indicative of the type of bargaining and negotiations needed to get the required majorities. Any final bill will be a compromise of the current and future proposals. Some of the topics impacting individual investors:

2. Long-term capital gain and qualified dividend tax rate to move from 20% to 39.6% + plus the 3.8% Net Investment Income Tax (NIIT) already in effect

3. Removing the step-up in basis at death for appreciated assets

What is the timing?

The rest of September and into October will be very busy.

If tax increases pass this fall, the actual implementation date is still to be determined. Nothing precludes a tax increase from being retroactive to the first of the year or when a bill is proposed (President Biden announced his specific plan on April 28) or when officially passed. In fact, the Sept. 12 proposal suggests an effective date of Sept. 13 for some of the increases—but not all. Note that a few Democrat senators have come out against retroactive application. It seems challenging for the Internal Revenue Service (IRS) to administratively implement such major changes this late in the filing year. If the tax rate changes are effective retroactively, it will undoubtedly be over the protests of many.

Will the Democratic Party hold out for a full loaf to include $1.75T in incremental revenue? Half a loaf? Or no loaf in regard to taxes? One analyst compared passing the full range of tax increases to trying to thread a needle—from outer space. Needless to say, the next few weeks will be very informative.

Given the frequency of news stories around taxes, I’ve found that many folks believe that taxes have already gone up. The increased buzz around taxes is a great opportunity to take the uncertainty on tax policy and bring it back to what you can help your client control around taxes: Being tax-smart around asset location, investment selection, withdrawal strategies and gain recognition. All of these are higher value services you can offer. Anytime taxes are in the news, it makes clients and prospects much more receptive about the value you offer on these topics.

The other point that comes up repeatedly in my conversations with investors about these potential changes is the reaction: whew, my income is below these thresholds—looks like I dodged the tax bullet! Acknowledge that might be true, but they may not dodge the existing bullet around the current tax rates on capital gains, dividends and income.  The Tax Cuts and Jobs Act did not lower the rate for long-term capital gains and qualified dividends. Those bullets are still out there and incoming for this capital gains season. 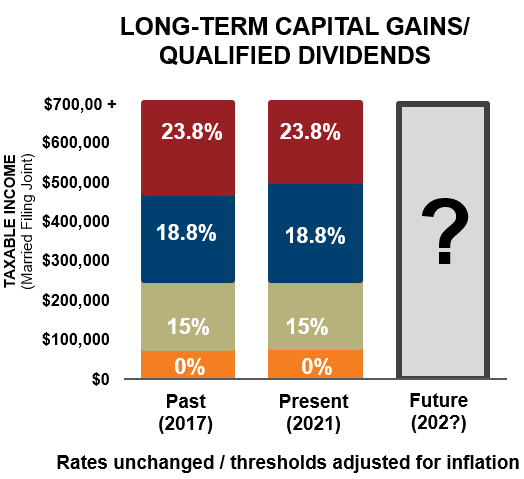 Remind your client that not every tax proposal or story they hear will become law. In fact, few will. The amount of internet clickbait put in front of investors makes it challenging to separate the possibilities, probabilities and even wild speculation. This is where you can help.