Don’t tax you, don’t tax me, tax that fellow behind the tree: Looking at the path of possible tax rate changes.

What should investors do when President Biden raises investment tax rates? Hold the phone, nothing is certain. For tax rate changes, the questions are if? And if so, then when? How? Whose plan? What rates?

In discussions with advisors and colleagues, many assume that with President Biden in office and the current narrow Democratic majority in the Senate, implementing the tax rate changes he campaigned on is a done deal. Again, hold the phone.

For the U.S. Senate to pass any tax code changes through the budget reconciliation process, President Biden will need all 50 Democratic senators to support the proposed changes. Getting all 50 of these senators on the same page for major tax changes is by no means a sure thing. This big tent contains wide and disparate views. The more moderate Democratic senators like Joe Manchin of West Virginia or Jon Tester of Montana may be closer aligned to moderate Republicans on tax policy than that of more liberal senators like Elizabeth Warren of Massachusetts or Bernie Sanders of Vermont. And in the House of Representatives, the Democratic majority is a mere 11 representatives. The advancement of any bills should not be taken for granted. And those who remember the election of Scott Brown of Massachusetts to the Senate back in 2010 recall how quickly and unexpectedly voting majorities can change.

As my colleague Erik Ristuben recently wrote, President Biden is spending the first part of his administration’s time focusing on mitigating the impacts of the coronavirus. How much political capital will the administration have after passing additional COVID relief bill(s)? The later you get into 2021/2022, the closer you get to the next round of midterm elections and the impact that has on votes.

And as I wrote late last December, if the administration is able to pass any tax changes, when would the new rates be effective? While the law does not preclude making tax changes retroactive to the first of the year, historically, tax increases have typically been for the following year. Tax decreases have been retroactive while increases, not so much. If something was passed this year, a likely effective date would 2022.

There has been much focus on the plan that then-candidate Joe Biden published back in 2019. This was before the pandemic was even a thing. We’ve written what this plan looks like. While much of the current discussion on taxes focuses on this list, we know from prior tax changes that much of any final legislation would actually come out of different finance committees in Congress. This was definitely the case with the Tax Cuts and Jobs Act, passed under President Trump in December of 2017.

The new leader of the Senate Finance Committee, Senator Ron Wyden (D-Ore.), published his plan on increasing investment taxes focusing on capital gains (“Treat Wealthy Like Wages”). This plan has similarities to the Biden campaign proposal but added making high-net-worth investors pay capital gain taxes annually on a mark-to-market basis—meaning one would owe tax on any unrealized appreciation, not just at gains at realization. This would be a material policy change. Additionally, the House Ways & Means Committee, led by Richard Neal (D-Mass.), has its own plans on tax policy.

The main point of all of this is that any possible tax changes will include input from the House, Senate and executive branch. This means that any tax bills signed into law (if there are any) may not line up with the Biden campaign plan so many are focusing on.

As mentioned above, there are many competing plans and endless ideas on increasing taxes. It’s worth noting that the tax rates for qualified dividends and long-term capital gains were not lowered with the passage of the Tax Cuts and Jobs Act (TCJA) in December 2017. In addition, the dollar amounts for those tax brackets have only changed marginally year-over-year, based on inflation. 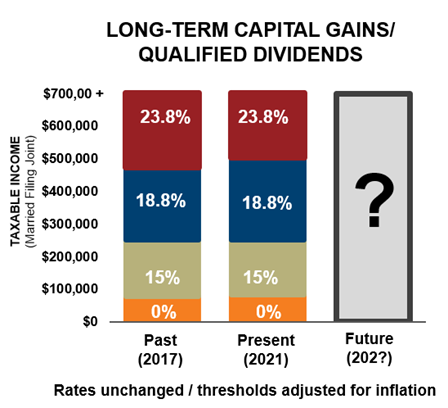 Also recall that many of the individual tax rate provisions that were lowered through the TCJA were limited in duration. The rates and other changes (higher standard deduction, lower tax brackets on income, interest, short-term capital gains, alternative minimum tax, etc.) are set to revert to the prior levels in 2026. Absent government action, these rates are going up anyway.

But regarding what rates, the current discussion seems to cover everything under the sun, with much of the focus on those with higher taxable income. Capital gain treatment seems to be a common thread throughout. As discussions continue about broadening the tax base, it will likely become any port in the storm for what is being considered. For raising taxes, it reminds me of the phrase: Don’t tax you, don’t tax me, tax that fellow behind the tree—meaning that raising taxes is fine, as long as it impacts someone else.

Investors will continue to hear stories in the media about possible changes to tax policy. Given the increase in the budget deficit over the last many years (not just during the pandemic), at some point, there needs to a better alignment between revenues and expenses. 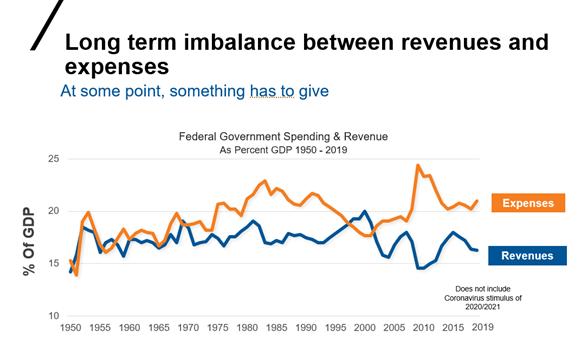 Regardless of tax code changes that may or may not happen, we believe that investment taxes will continue to be headwinds to successful investment outcomes. Being familiar with tax policy and understanding how to be a tax-smart advisor will continue to help differentiate your practice, help you to stand out for prospects and potentially increase the value you bring to your clients.