Markets hit the rewind button this afternoon as the U.S. Federal Reserve (the Fed) talked about the need for "some" further rate hikes in 2019.

While the Fed raised interest rates again today by 25 basis points, Chair Jerome Powell reiterated that the central bank will adopt a data-dependent approach when it comes to weighing future rate hikes going forward. Major indexes, which had stumbled to their worst December start since the Great Depression1, were rallying this morning in anticipation of a more dovish outcome, but have since given up all of those gains and then some. The S&P 500® Index fell over 1.5% to 2,506, while the Dow Jones Industrial Average sank over 350 points to 23,323--both hitting new lows for the year.

In our view, the Fed threaded the needle today--raising rates and forecasting "some" further hikes, but marking down the anticipated number of rate increases for next year from three to two as concerns over the health of the global economy and financial markets have grown.

Today's rate hike, the fourth of 2018, means that the Fed has now--somewhat boringly--taken tightening steps at every quarterly press conference meeting dating back to December 2016.

Those decisions, in our view, have been well justified. At the risk of oversimplifying U.S. monetary policy, Chair Jerome Powell really appears to only care about two things:

For a U.S. central banker, satisfying both of these mandates pretty much means mission accomplished.  The Fed's goal now becomes keeping the economy right here, forever (good luck!). How?

Most policy rules will tell the Fed it should set its interest rate at a level that is neither restrictive nor accommodative for economic growth. Economists call this interest rate r-star, or the neutral rate of interest. The problem is that nobody knows where r-star is. The Fed has an informed guess about it--back in November, Powell said that rates are "just below the broad range of estimates of … neutral." The Fed's latest projections put this neutral interest rate at somewhere between 2.5% and 3% in nominal terms. We'd tend to agree. The current Fed funds target range of 2.25% to 2.5% is still slightly below neutral. As such, we think the next hike (probably in March) to get rates up into the neutral zone should be relatively easy. The decisions from there get a lot more interesting.

The Fed has transitioned its guidance on rates as we approach that point. In September, a large majority of FOMC participants advocated for a restrictive monetary policy setting (hiking beyond neutral). In November, the FOMC instead emphasized a flexible and data-dependent approach when considering further rate increases. Jerome Powell reinforced that tone in his press conference today. To be clear, data dependence does not mean dovish--it means that monetary policy decisions will be guided by data. In other words, if numbers from the first quarter of 2019 indicate a sharp slowdown in growth, the Fed is more likely to use this data as justification to hit pause on its interest-rate increases come June. On the flip side, if the data indicates a pickup in inflation, the Fed may use that to justify the need for further rate hikes.

U.S. growth and inflation outlook for 2019

Against this backdrop, the outlook for U.S. growth and inflation will prove pivotal for the Fed's decisions in the new year. On the growth side of the ledger, incoming data continues to come in well ahead of the U.S. economy's long-term potential (see first three rows in the table below). Put differently, there appears to be a significant cushion for a moderation in economic growth rates before the Fed should consider pausing. The slowing of global growth and the tightening of financial conditions are risks in this regard--but solely through their impact on domestic fundamentals. We believe that for now, the damage has not been severe enough to call into question the tightening cycle. 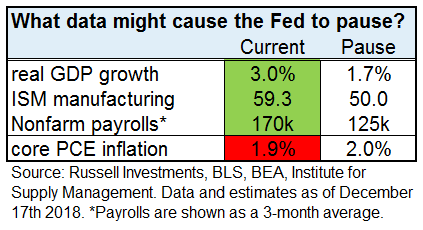 The inflation outlook is more uncertain. As noted above, our expectation is for core PCE inflation to log in at 1.9% for November--a tenth of a percentage point below the Fed's target. We believe that a case can certainly be made for the Fed to wait for greater evidence that inflation is breaching its 2% inflation target before transitioning to a restrictive monetary policy setting.

Why? There are several cross-currents buffeting U.S. inflation. 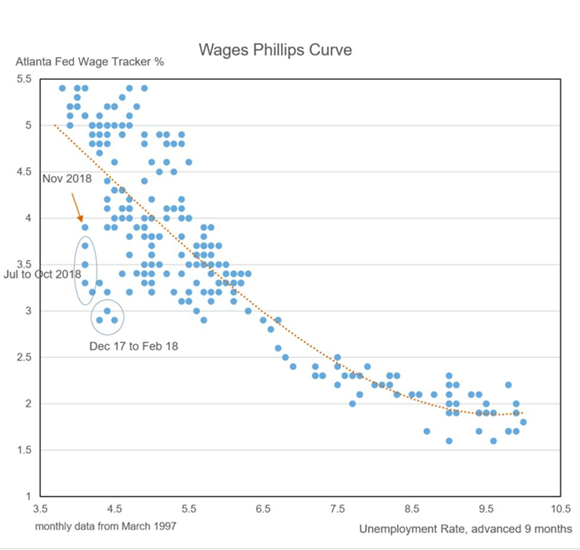 From an investment strategy perspective, this is important because fed fund futures are now pricing less than one hike through the end of 2019. To reiterate our view: we think the next hike to get rates into the neutral zone will be relatively easy. And while we'd note the outlook from there is more uncertain, we see the balance of risks as being skewed to further hikes. The gap between our view on the likely path of Fed policy and what is priced into fixed-income markets is currently at its widest since August of 2017.

Cyclically, we see potential for higher 10-year U.S. Treasury yields over the next six months. From a sentiment perspective, investor positioning has also normalized. Speculators were overwhelmingly betting on rising rates three months ago. We find speculative positioning to be a powerful contrarian indicator. A few months ago, that indicator was advocating for us to express an overweight preference for U.S. Treasuries. It has now been neutralized. From a valuation perspective, 10-year Treasury yields have transitioned from being slightly cheap (3.25%) in November to now being within the vicinity of our 2.6% fair-value estimate.

Our cycle, valuation and sentiment framework suggests upside risk to Treasury yields over the next six months. Tactically, we see an opportunity to trim allocations to risk-avoiding fixed income and other rate-sensitive assets.