It’s worth remembering that China has been through many periods of volatility in the past 20 years alone, starting with the mid-1990s, when a number of state-owned enterprises were shut down. This was followed by the Asian Financial Crisis in 1997, a recapitalization of the banking system in the mid-2000s and global impacts stemming from the Global Financial Crisis.

The data flow has been quite choppy since these measures were enacted, with the first round of numbers in March painting a more optimistic picture, followed by a slew of disappointing economic data from April through July that suggests the government’s response has yet to truly have a sizable impact. We continue to cautiously wait for meaningful signs in the data that China’s economy is truly stabilizing.

One key development over the past two months, in our opinion, was the takeover of Baoshang Bank by the People’s Bank of China (PBoC). The surprise came with the PBoC noting that “not all of the liabilities would necessarily be guaranteed.”3 We are closely watching the health of other small banks in China and suspect that we may see a few more of these instances, particularly as the government attempts to shift the bulk of lending back to the larger banks. The other related watchpoint to this potential uptick in bank recapitalization is whether provincial governments need to get support from the central government. 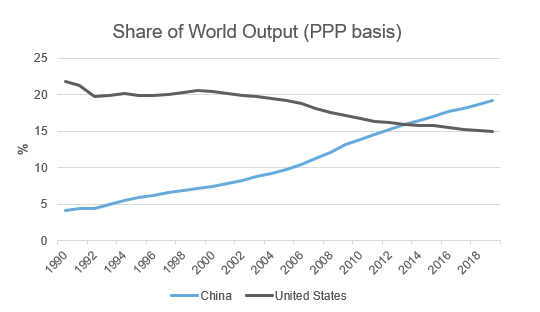 As depicted in the chart below, a slowdown in demand from China could heavily impact other Asian economies, as well as the European economy. Already, we‘ve  seen the effects of lessened Chinese demand on German auto production4, although this was exacerbated by new emissions regulations.

The rise of Chinese manufacturing has been very deflationary for the global economy, as can be seen in the chart below. Why? The large migratory move from rural to urban areas provided a steady stream of cheap labor, which kept costs down.

However, this tailwind is starting to slow, with tightening labor markets beginning to lead to wage growth. Additionally, the uncertainty around the trade war has led to a shift away from Chinese manufacturing, including to some higher-cost countries. On a global scale, this will have the effect of boosting inflation. For instance, Apple is reportedly looking at moving production to Vietnam and India7, Nintendo is looking at Vietnam8 and Foxconn has acquired land-use rights in Vietnam.9 The move to Vietnam is likely to be inflationary, given land is expensive, and factories and warehouses are in short supply. Recruiting trained workers and managers is another challenge. 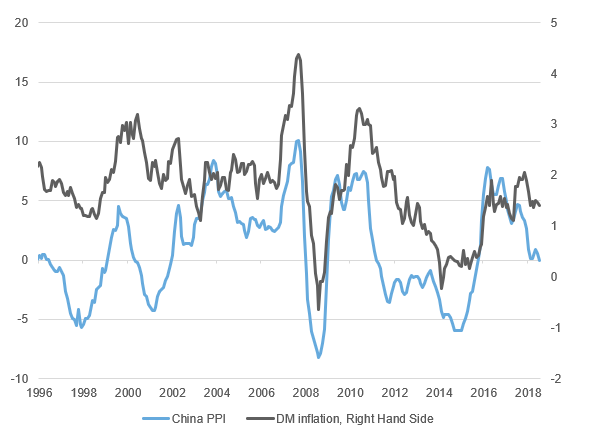