Municipal bond fund inflows in 2019 were tremendous. In fact, they set an annual record of $105 billion through Dec. 31 into open-end mutual funds and exchange traded funds, as illustrated in the chart below. This is 41% higher than 2009, which held the previous record of $74 billion. A much smaller segment of the municipal bond fund market is high yield (or sub-investment grade). This segment also had a record-setting year, pulling in $19 billion of net flows, 60% higher than the last record set in 2012.

This influx of flows can largely be explained by strong technical demand, which in turn was driven by: 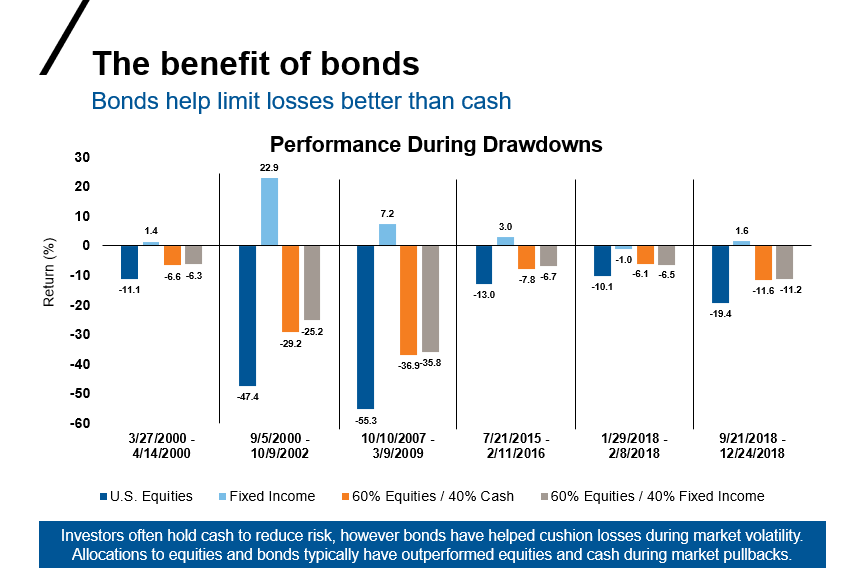 Source: Morningstar; U.S. Equities: S&P 500; Fixed Income:  Bloomberg US Aggregate Bond; Cash: FTSE Treasury Bill 3 Mo Index. Index returns represent past performance, are not a guarantee of future performance, and are not indicative of any specific investment. Indexes are unmanaged and cannot be invested in directly.

As low rates, stable credit quality and an accommodative (low rates) Fed stance prevail, strong demand from 2019 has continued into 2020. However, so has muted issuance.  This results in managers of large funds venturing into riskier bond issues where they otherwise would not be inclined to invest, in order to keep portfolios fully invested.

Similar to 2008, this has increased the amount of non-rated (NR) issues in some of the largest high yield municipal bond funds. Although non-rated securities represent a legitimate category to explore to find value opportunities, positions call for elevated due diligence and resources to fully vet the risks involved.

For perspective, we measured the three largest funds which are currently active and held over $1+ billion in assets in 2008. These funds averaged approximately 57% exposure to NR issues, while the peer average held 30%. Further, the average of these funds lost 32%, which was 5% lower than the peer average, while also carrying more risk over the same period.

How does the bond landscape look today?

Reviewing our current landscape, when considering the same search criteria as above, average non-rated exposure grew by 23% since December 2015—flirting with levels similar to 2008. This doesn’t necessarily indicate that an end is imminent, although it does indicate that if volatility emerges—and the markets come unhinged—funds that have increased their exposure to riskier issues may not have the flexibility to sidestep potential pull backs.  The reason being, NR issues that have a brighter outlook would be lumped into the same category as ones that may not have a favorable outlook. This would prompt investors to sell or steer clear of the asset class in general—the proverbial tossing out the baby with the bathwater scenario.

What’s the solution?  A few alternatives to consider

For many investors, today’s low interest rate environment increases the need to consider a wider opportunity set of funds to meet yield requirements. For taxable investors—even those who aren’t in the top tax bracket—municipal bond vehicles may help them achieve their desired outcomes.

At Russell Investments, we believe advisors and investors alike should consider nimbler alternatives that have the ability to be discerning with bond selection and maintain lower non-rated exposure. These alternatives typically come in the form of funds with relatively lower asset sizes. Smaller asset sizes mean the portfolio manager can pick and choose which bonds they want for their strategy, and don’t have to feel compelled to buy riskier, less-than-desirable credits to fill the demand from a very large fund.

Although defaults are known to be quite low in the municipal bond space relative to corporate bonds, when you have limited supply and record inflows, larger municipal bond funds have historically struggled to be discerning when it comes to credit selection to keep up with the demand.  Although they may warrant a place in an investor’s tax efficient portfolio, be mindful of outsized high yield municipal bond funds that have increased their positions in lower rated and—more importantly, non-rated issues—which could magnify drawdowns if and when the markets become unhinged.

While non-rated issues certainly do have great long-run potential, we believe investors may want to consider smaller municipal funds that have the capacity and latitude to be very selective when adding NR securities to their fund, keeping the overall exposure at a more manageable level.