As the military build-up continued and President Biden announced on Feb. 18 that he was convinced that Russia’s President Putin had made the decision to invade, Russian equities traded lower and credit spreads widened. The following chart shows the normalized price trend of the main Russian stock index MOEX through Feb. 23, the day before the invasion.  It shows a clear deterioration through mid-February, followed by a sharp drop after the Biden announcement. 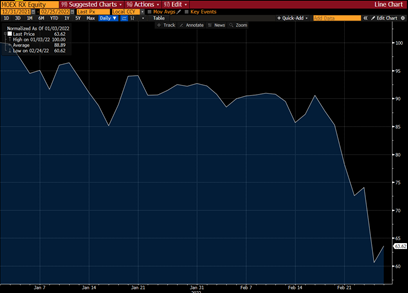 While the Russian MOEX has been closed since Feb. 25, Russian companies that have global depositary receipts (GDRs) listed in London traded actively until March 3, when the London Stock Exchange suspended trading in 27 companies with Russian ties. Prior to the suspension, many GDRs collapsed in price. Looking at the charts below, the chart on the left shows the performance of the Dow Jones GDR Index (measuring performance of Russian GDRs listed on the London Stock Exchange). It looks similar to the prior MOEX chart through Feb. 25, but then shows the extremely negative price action the week of Feb. 28 until March 3, while MOEX was closed. The GDR index is now showing an astonishing 97% decline since year-end. The chart on the right shows the price action of the largest constituent of the GDR index, Gazprom, which has shown a catastrophic downward move in price. The bar chart at the bottom also shows Gazprom’s severe tapering of trading activity.