Choosing the right mix of stocks and bonds can be one of the most basic yet confusing decisions facing any investor. In general, the role of stocks is to provide long-term growth potential and the role of bonds is to provide an income stream. The question is how these qualities fit into your investment strategy.

When an investor buys shares of stock, he or she buys part ownership in a corporation. As such, the value of that corporation's stock will tend to reflect the earnings experience of the firm — up during profitable periods and down during periods of loss. Generally speaking, the higher the potential return, the higher the risk. For example, stock investors expect a fairly high rate of return because there is no schedule of repayment and no stated rate of return like that paid by fixed-income securities such as bonds.

Even within the world of stocks, there are variations in risk and reward. "Blue chip" stocks are issues of companies that are well established within their respective industries and have long histories of producing earnings and paying dividends. Small capitalization, or "small cap," stocks represent shares in companies that are less established. Because of this, they have the potential for tremendous growth, which can translate into a large return for investors. Coupled with this, however, is a higher potential for decrease in their value than you would expect from well-established companies.

Bonds: Making a loan to a corporation

Bonds represent loans made by investors to companies and other entities, such as branches of government, that have issued the bonds to attract capital without giving up managing control. A bondholder, in effect, holds an IOU.

Bondholders do not share in a company's profits. Rather, they receive a fixed return on their investment. This return, stated as an interest rate on the bond, is called the "coupon rate" and is a percentage of the bond's original offering price.

Bonds are issued for specified time periods. When the bond expires and the principal (original investment) is returned, the bond is said to have matured. Bonds can take as long as 30 years to mature. Time to maturity and the issuer's ability to make good on its payment obligations are the two most important factors in choosing individual bonds to purchase.

Every bond carries the risk that a promised payment will not be made in full or on time. As uncertainty of repayment rises, investors demand higher levels of return in exchange for assuming greater risk.

Potential bond buyers can assess an issuer's ability to meet its debt obligations by considering the bond rating assigned by agencies such as Moody's Investors Service or Standard & Poor's. A rating indicating a high likelihood of repayment will allow an issuer to sell its bonds with a lower coupon rate than one that received a poorer rating.

Bonds, similar to common stocks, fluctuate in market value and, if sold prior to maturity, may produce a gain or a loss in principal value.

Also available are mortgage-backed securities, which in many cases are fully backed by a U.S. government agency.

Corporate bonds are generally issued by industrial corporations, financial firms, public utilities, and transportation companies. They usually pay more interest than government bonds but carry a greater risk of default. If a corporation goes bankrupt, bondholders have priority claim, before stockholders, on the company's assets.

Understanding the differences between stocks and bonds

An important distinction when weighing the rewards of stocks vs. bonds is that stocks have (theoretically) an unlimited ability for appreciation. That is, there is no upper limit to how valuable they can become.

On the other hand, a bond buyer generally knows the upper limit to expect on such an investment, especially if it is held to maturity. It is true that a bond can sell at a premium prior to maturity, but the potential for appreciation here is nowhere near as great as it is for stocks.

Both options have their risks as well. With stocks, although theoretically there may be no ceiling, there is a bottom. Stocks can drop in value and become worthless. With bonds, there is interest rate, inflation and credit risk. Credit risk is the risk that the bond issuer will be unable to make its payments on time or at all, effectively defaulting on the bonds. 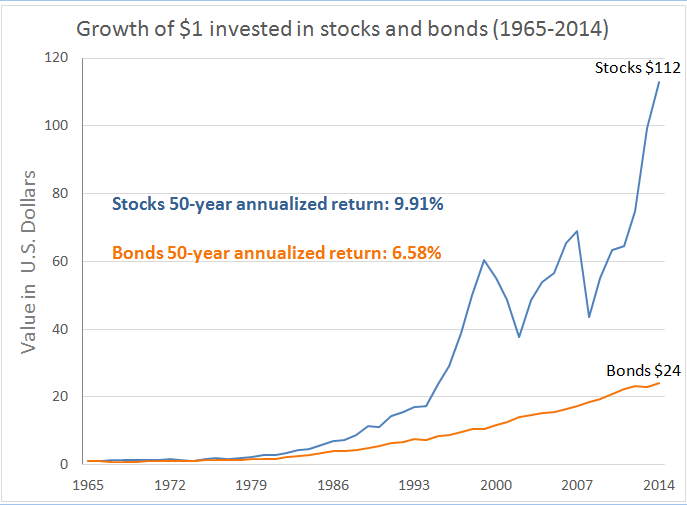 Spreading your investment funds among various classes of stocks and bonds — diversifying — is the choice for many. A mix of stable, fixed-income investments (to help cushion stock market volatility) and stocks (to provide growth potential over the long haul) is a key ingredient to working toward meeting long-term financial goals.

Your financial timeline
Our products