What’s next for municipal bonds after a strong first half of the year?

As summer hits its stride, here are some musings about municipal bond performance to mull over as you unwind at the beach or on the couch (no judging!).

During the first half of the year, municipal bonds (munis) shrugged off the rise in long-term U.S. interest rates and crushed their taxable counterparts. Expectations for higher taxes in 2022 that could be included in a potential stimulus package have kept demand high, while muni net supply was constrained the last few months.

However, we believe it will be tough for munis to deliver the same outperformance versus taxable bonds during the second half of the year. Why? Muni yields started the year at much higher levels versus Treasuries (representing value); this differential is much less now, diminishing the relative value of munis versus Treasuries. The driving force for the rest of the year should continue to be technical demand, driven largely by the U.S. government’s fiscal plan (more on this below). Barring a total derailment of the infrastructure and social-stimulus packages, we can expect this demand to stay high and muni yields to remain tight to Treasuries, with returns approximating muni market yields. Any strong selloff in munis is likely to quickly snap back as investors jump in to capture value.

The price advantage in lower quality munis has declined during the strong rally during the first half of the year.  However, we continue to prefer high yield muni bonds to investment grade muni bonds, given their relatively higher yields versus their taxable corporate counterparts and relative resilience to increases in interest rates. Based on the current distressed rate, our default expectations are for a default rate of about 1% through the remainder of the year, much lower than what we expect for high yield corporates.

Looking at fundamental credit strength, state tax receipts are much better than were estimated a year ago. Further, the American Rescue Plan should make them flush, as the graphic below shows: 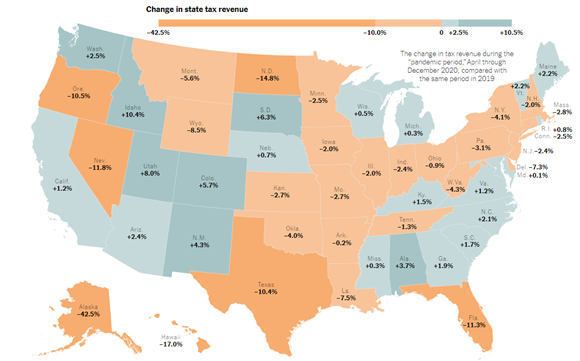 Zeroing in on some state-specific good news, it’s worth pointing out that the state of Illinois (Baa2 / BBB- / BBB-) has stepped back from the junk-bond cliff’s edge with its general-obligation muni bonds recently upgraded to Baa2 from Baa3 by Moody’s due to a material improvement in the state’s finances.

In addition, on June 29, New Jersey Governor Phil Murphy signed into law a record $46 billion state budget, including New Jersey’s largest-ever pension payment. This marks the first time in 25-plus years the state will make the required minimum contribution to its under-funded retirement system.

Municipal bonds are one of the asset classes that will probably be most affected by the ongoing infrastructure negotiations, both directly and indirectly. The below graphic shows the parts of the municipal market that may receive stimulus:

Importantly, current infrastructure proposals do not include provisions to increase corporate and individual taxes, or capital gains taxes, which were the focus of the  Made in America tax plan announced in April. Munis have performed strongly this year mostly due to increased demand from expectations of higher tax rates in 2022, which means munis might weaken and underperform during the second half should it look like high tax rates are not in the offing.  We do see, however, a high probability for another bill, sponsored by Democrats, to be passed via budget reconciliation in the autumn / winter.  This bill would contain the anticipated individual and corporate tax hikes.

High yield and investment grade municipals have strongly outperformed their taxable counterparts through June 30, driven by strong demand and improving credit fundamentals. While we think the same degree of outperformance for the rest of 2021 is unlikely, we do believe that municipal bond prices will continue to be supported due to prospects for increasing taxes, along with infrastructure projects that will benefit states and localities.