Throughout the year we ask bond and currency managers to consider valuations, expectations and outlooks for the coming months. Today, we've put the spotlight on U.S. interest rates and the outlook for credit--and we ask, What's next for emerging market foreign exchange (EM FX) and the U.S. dollar?

For some time now, we have highlighted the dichotomy between the views of our global interest rate managers and our credit managers. Both have been, in our view, too optimistic in their outlooks--which, given their relationship, feels incongruous. Although we slightly digressed from this theme in our last survey, it has reared its head once more this time around as we continue to observe mixed signals.

Today, we've put the spotlight on:

In September, we received answers from 53 investment managers from across the world.

Is a U.S. recession in the cards?

Over the year, managers in our global interest rate survey have been relatively slow to get on board with the trajectory of the interest rate hikes made by the U.S. Federal Reserve (the Fed). Indeed, the average respondent in the interest rate manager survey has tended to raise expectations only as market rates have moved up.

However, in our most recent survey, we have seen a shift in expectations. In total, 62% of interest rate managers now expect to see four or more interest rate hikes from the Fed over the next 12 months, up from 44% last quarter and 27% before that.

Expectations for the flattening of the U.S. Treasury yield curve 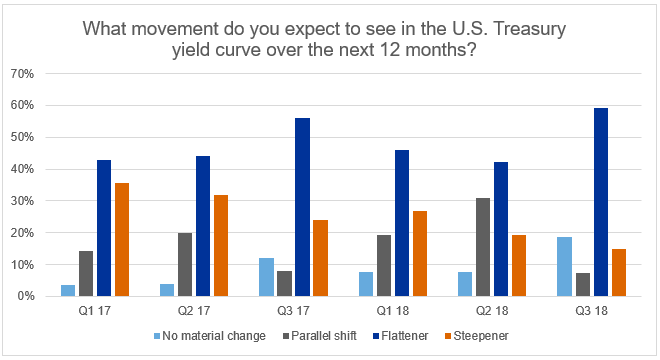 We've highlighted before how the flattening of the U.S. Treasury yield curve is often a very typical signal that a recession is on the cards. In fact, this event has predicted all nine U.S. recessions since 1955.2This increased conviction is a tell-tale sign that global interest rate managers are expecting--and preparing--for an eventual U.S. recession. However, as we stated last time, a flattening U.S. Treasury yield curve could have bad implications for credit. Despite this, we are continuing to see many credit managers remain bullish on corporate fundamentals (see below).

The outlook for credit: Watch this space

Now that interest rate manager expectations have materially shifted toward multiple interest rate hikes and a flattening of the curve, will cracks in credit appear next? If these expectations end up being true, we believe it's likely that credit fundamentals will come under pressure. We would expect to see a more conservative outlook on corporate credit from credit managers. Yet, credit managers continue to paint a positive view of the corporate picture.

In our last survey, we witnessed a sharp decline in the previously bullish view for credit fundamentals as it fell from 89% down to 55%. This quarter, positive sentiment has modestly increased upward again to 63% of survey respondents describing the corporate fundamental picture as improving. Although this dipped last quarter, managers have maintained a continued bullish outlook overall throughout 2018. In our view, this strong outlook for credit fundamentals is at odds with the expectations of a flattening Treasury yield curve we saw earlier. If markets expect the likelihood of a U.S. recession to go up, why then be so aggressive on credit? 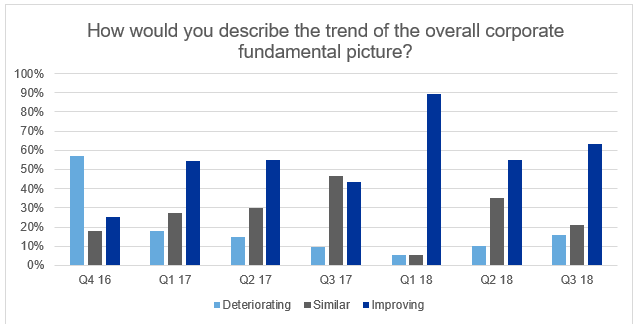 Signs that credit spreads are moving beyond fair value

While credit managers observe improving fundamentals, there are some signs that they also feel spreads are no longer compensating for the ever-increasing risk of a recession. For example, this is the first quarter since our survey began that not one single respondent expects credit spreads to tighten over the next 12 months. And, given that spread tightening is generally associated with price appreciation (all else being equal), we can infer that credit managers foresee an asymmetric return profile with a deterioration of the risk reward pay-off.

Credit risk level is another trend that stands out as a sign that managers are starting to consider a more cautious approach. The number of survey respondents who plan to maintain their current credit risk has fallen significantly from 70% down to 53%. In fact, more managers than ever are planning to decrease their current credit risk levels--up from 25% last quarter to 47% this quarter. 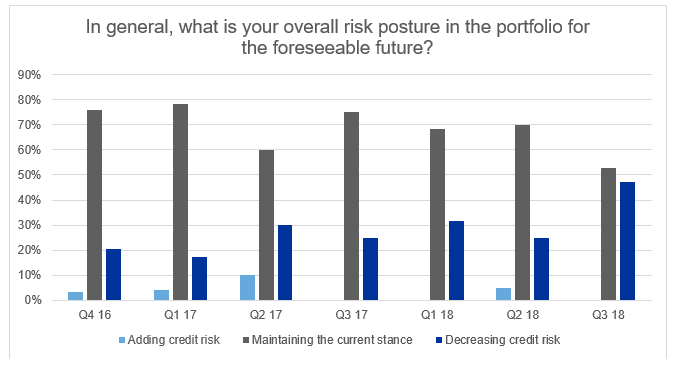 What's next for EM FX and the dollar?

Optimistic on a longer-term view

Respondents from our local currency emerging market debt (EMD) survey have significantly shifted their sentiment for EM FX on a 12-month outlook--showing the least amount of enthusiasm in 2018.3Yet, on a three-year perspective, managers are the most enthusiastic we've seen for the year as a whole. Dedicated currency managers also agree and remain bullish overall. Together, this suggests that managers see EM FX as having better prospects than the U.S. dollar. 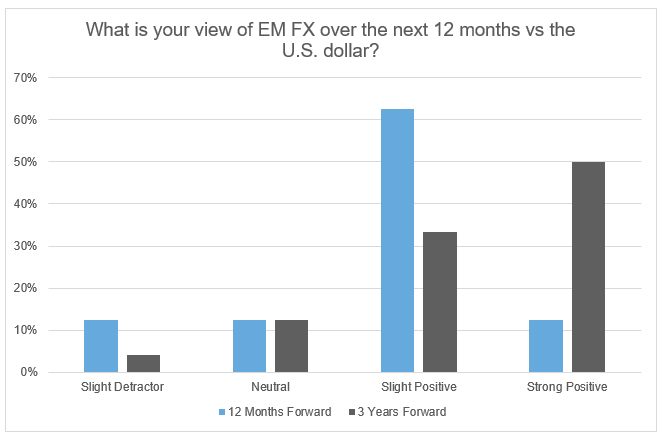 Given that managers are optimistic on a longer-term view, we can infer that broadly, market participants have the view that the U.S. dollar has reached--or has nearly reached--its peak. In simple terms, this means that our survey respondents believe that EM FX will rise and the U.S. dollar will fall over the next three years. However, it is clear to us that managers are struggling to predict the bottom of this selloff.

Now that the NAFTA agreement has been resolved, the fundamental risk underpinning the Mexican peso has diminished. Although some may argue that this actually offered investors a very attractive risk premium at the beginning of the year, managers in our survey are more bullish on the Mexican peso than they've been at any point this year.

Predicting the future: Still as difficult as ever.

As we know, it is impossible to predict the future of the market, but our survey gives a nice opportunity to weigh in. We have seen the incongruent views of bullish rate markets and bullish credit markets move closer into alignment, as rate managers keep upgrading their expectations for the economy. However, given the rising central bank rates we can see how this may ultimately trip up credit investors, who continue to remain very bullish.

The expectations for curve flattening are bringing investors closer to a point where credit fundamentals may face a challenge.

Given this backdrop, we believe a focus on local currency EMD may be prudent, as EMD has already been dislocated and looks to be potentially appealing to the specialist managers in the asset class.

3In our Q1 2018 survey, local currency EMD managers were very bullish in their outlook for EM FX (versus the dollar) following positive performance from November 2016 - end January 2018. Despite this strong run, EM FX has had a tough year to date, falling roughly 13% from its high point against the USD earlier this year, with the accelerated decline kicking off April 18, 2018, via the MSCI Emerging Markets Currency Index.