Among the 20 largest US-listed corporate DB sponsors, General Electric Company ended 2018 with the third lowest funded ratio at 75.6%.¹ This is a precipitous decline from 2007, when their funded ratio was the third highest among this group at 129.1%. Over that time period – when the average funded ratio dropped about 20 percentage points - GE's dropped by over 50 percentage points.¹ How did this happen?

A large part of the decline can be explained by the Global Financial Crisis (GFC) in 2008, where GE's plan assets lost about 30% in value (the second worst among these 20 sponsors) due to their aggressive asset allocation (about 75% in return-seeking assets²). After that, GE probably could have done a bit more to manage their interest rate risk as rates generally declined for the next ten years. Only in the last few years has GE meaningfully increased their fixed income allocation and duration.³ But perhaps the most telling signal that the funded ratio was not sustainable was their funding policy.

Believe it or not, for about 25 years – between 1987 and 2011 – GE made zero contributions to its main US pension plan – the GE Pension Plan (about $50 billion in asset at the end of 2018).⁴ At first, this policy persisted since their overfunded position precluded any tax advantage to contributing. At the time, some well-funded plans had a "maximum deductible contribution" (calculated by the actuary based on funded position) of zero. Sponsors had little incentive to contribute and depended on investment returns to ensure plans maintained and improved their funded position.

Law changes that became effective in 2007 allowed for tax-deductible contributions to plans with much higher funded ratios, but by that point the GE Pension Plan was still so well-funded that additional contributions were not required.

The "non-funding" policy for the GE Pension Plan continued.

Despite pushing the funded ratio below 100%, the GFC did not immediately lead to contribution requirements for GE. In fact, due to various forms of funding relief, contributions were only required once for the GE Pension Plan between 2008 and 2015 (in 2012 – the same year as the plan closure). Meanwhile, the GE Pension Plan's funded status failed to improve, despite strong equity markets, due to falling interest rates and a low interest rate hedge ratio. Eventually this persistently low funded ratio would catch up with them.

In 2018, GE's stock price dropped to a 25-year low. The iconic corporation found itself mired in a suffocating amount of debt, including the pension plans. For perspective, consider that in 2007 the pension liabilities were just 14% of the company's market cap. By the end of 2018, pension liabilities were 115% of market cap – a glaring issue impossible to ignore. At the same time, contribution requirements started creeping up in 2016 and 2017. The risks associated with funding only the minimum required contribution became more real.

In 2018, for the first time in at least 30 years, GE voluntarily made a contribution above the minimum requirement into the GE Pension Plan. With a global funding deficit of nearly $29 billion at the end of 2017, their 2018 contribution of $6 billion - $4.5 billion higher than "requirements" and funded with debt – was significant but just a first step in getting their DB plan under control.

Not all large sponsors waited this long. Ford, for example, whose funded status was even worse off after the GFC, started taking decisive action to fund up and de-risk their plans in 2012. For many years, the pension liabilities had dwarfed Ford's market cap and aggressive action was merited. They made large discretionary pension contributions in 2012 and 2013, combined with a de-risking glidepath to reduce interest rate and equity risk as their funded ratio improved.

The chart below shows the progression of funded ratio for GE, Ford and the average of similarly-sized plans between 2007 and 2018 (left axis). The columns show contributions as a percentage of PBO (right axis) over the same time period for the GE Pension Plan and Ford's US plans. The voluntary contributions added by Ford in 2012 and 2013, paired with glidepath-guided investment decisions, helped buoy their funded ratio as GE's stagnated. 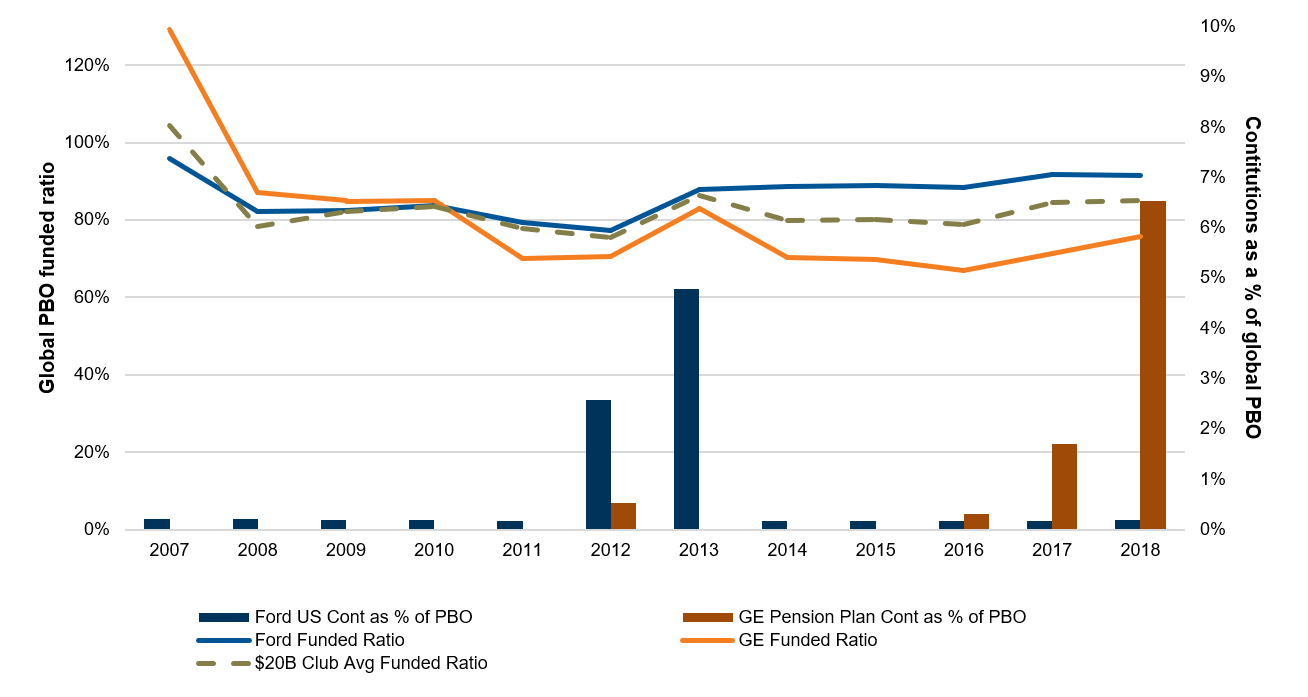 While not clear in the public announcement, we would also expect GE to continue taking action on their asset allocation, perhaps implementing a de-risking glidepath (if they do not have one in place already) and continuing to reduce its interest rate risk exposure. This would be consistent with what others have been doing for the last several years.

Ultimately, closed plans become frozen plans, which then become hibernating plans and terminated plans. Having a strategy in place to navigate from point A (underfunded and heavily exposed to risk) to point B (fully funded and de-risked) is critical to success. GE has shown a willingness to take the first important steps on their de-risking journey, and we will continue to observe with interest as they continue on this path.