Resetting the cycle: The old normal

For mostly obvious reasons, 2020 was the wildest year in recent memory for the global economy and markets across all asset classes. We saw markets fall and economic activity collapse, only to rebound in the space of months, buoyed by record amounts of monetary and fiscal stimulus. As we begin 2021, the market’s focus has turned to the early stages of the economic recovery and a return to normal. As a result of the COVID-19 impact, the global economy has effectively been reset.

The view within Russell Investments’ strategy team is that global markets are moving to the old normal. The medium-term outlook for economies and earnings is positive, and the global economy is in the early post-recession recovery phase. Due to the large amount of spare capacity in the system (i.e. elevated levels of unemployment), economies are going to be able to produce low-inflationary growth—which tends to be good for risk markets.

The reset of the global economy to the early cycle phase, coupled with a backdrop of low inflation and low interest rates, favours equity over bonds. Over the next five years, Russell Investments expects global equities to return 7.3%, versus a return of -0.1% for global aggregate fixed income.

Within global equities, expected returns vary across different regions over the next five years. U.S. equities, which have outperformed in recent years on the back of high-growth tech heavyweights, are expected to underperform relative to other regional equity markets as valuation spreads normalise. Non-U.S. developed market and emerging market equities, in particular, are expected to have stronger returns. The timing and extent of these return differences is debatable, but the belief is U.S. equities will be a relative loser.

The time for value

The expected outperformance of non-U.S. equities over U.S. equities is consistent with value stocks outperforming growth stocks. Value stocks are those which trade on lower multiples relative to earnings, have lower growth expectations and have higher dividend yields. Value stocks tend to be more cyclical and generally include financials, materials and energy. Growth stocks, on the other hand, trade at relatively high multiples to earnings, exhibit higher earnings growth expectations and often do not pay dividends, as profits are reinvested in the business for future growth. Growth stocks generally include consumer discretionary and technology stocks.

The reset of the economic cycle is a major catalyst supporting a positive outlook for value stocks, which traditionally do well in post-recessionary environments of economic growth. These environments, in turn, are supportive of cyclical market segments.

Globally, fund managers like Russell Investments apply a cycle, valuation and sentiment (CVS) investment decision-making process and, by applying this, now scores global value stocks as very attractive, and as a result expect value to outperform over the coming year.

The aforementioned early cycle phase is key for the relative attractiveness of value stocks. There are a number of economic indicators supporting the cycle signal of our CVS process.

From an earnings perspective, increasing earnings-per-share (EPS) growth across the market—especially for cyclicals—is a key gauge for the support of value stocks. When aggregate EPS growth is low, growth stocks that exhibit relatively high EPS growth are rewarded as growth is scarce (which has been the case in recent years). When economic growth is stronger and EPS growth across the market is increasing, there tends to be less of a premium for growth stocks as there is less growth scarcity.

More qualitative economic signals are also supportive for an overweight position in value stocks. Expansionary manufacturing activity in many economies, as well as positive leading indicators (including the OECD’s Composite Leading Indicator) bode well for the performance of value stocks, which traditionally outperform when cyclical parts of the market rally at the expense of defensives. Finally, record levels of fiscal stimulus should continue to support cyclical value stocks as we move through the rest of 2021.

Value stocks are cheap on an absolute and relative basis (and have been for some time). The fall in interest rates to near-zero levels (and in some markets, negative yields) has driven the valuation of bonds and other long-duration assets, such as growth stocks, to extremes. This is evident in equity markets, where long-duration growth-stock valuations have risen to levels comparable to, and even higher than, the tech boom of the early 2000s.

Growth stocks are longer duration assets than value stocks as their valuation is based on cash flows, which are expected to be received further into the future. On many measures, the valuation spread between growth and value stocks is as wide as it has ever been. As economic expansion continues and inflationary pressures build in markets, the valuation of growth stocks appears more and more risky as the tailwind of lower rates potentially shifts to a headwind of (moderately) higher rates. 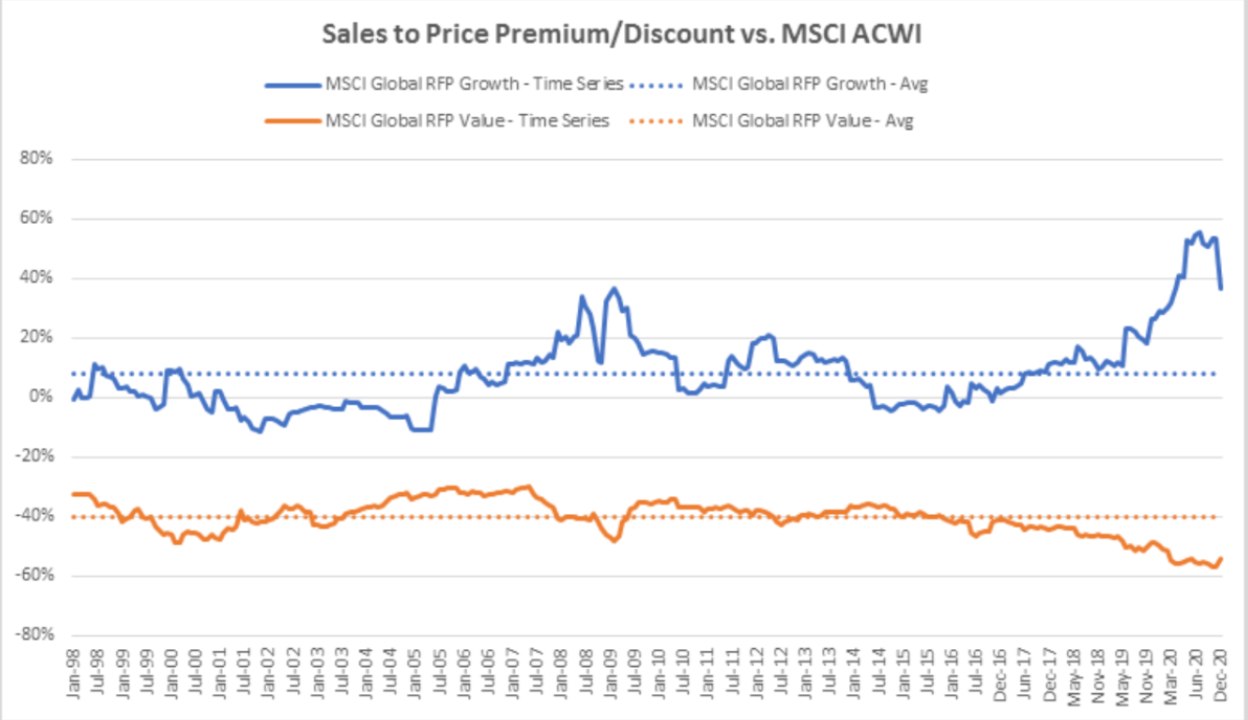 Source: Russell Investments. In the chart above, RFP stands for Russell Factor Portfolio

March 2020 was one of the worst months for the performance of value stocks in history, as the COVID-19 pandemic and global lockdowns significantly impacted cyclical stocks such as energy and financials. Sentiment toward global value stocks was extremely negative, reaching levels not seen since the Global Financial Crisis. As markets rebounded and looked toward recovery and a return to normalcy, the sentiment of value stocks began to revert and become less negative.

The announcement of a successful COVID-19 vaccine in November 2020 was a catalyst for a major shift in the sentiment for value stocks. Nov. 9—the day of Pfizer’s announcement that its vaccine trials had yielded a successful result—was one of the largest days of rotation away from growth and momentum stocks and into value stocks on record, as the market became more optimistic on the outlook for the global economy and cyclical stocks.

Since then, the market continues to rotate toward cyclical value stocks and away from growth stocks, and sentiment has improved to positive levels in most global markets. Sentiment is a powerful force in markets, and the move from extreme negative sentiment for value stocks to positive is a significant and important shift, which Russell Investments believe will continue to support the outperformance of value relative to growth throughout the year.

Case Study: Where you may find value in Australian Equities

The financial sector, specifically banks (but also insurance and some diversified financial companies), is a traditional value sector across global equities. Banks are typically mature businesses, with relatively low growth expectations, and relatively high dividend yields – hallmarks of value stocks. As such, banks generally trade at a discount to market valuations. Banks are shorter duration assets as a higher proportion of valuation is derived from cash flows closer to today rather than those further out into the future (as is seen with growth stocks) – as noted above, with the backdrop of some inflationary pressure and upside risk to discount rates, banks are likely to outperform in an economic recovery scenario. We can apply the same CVS framework to the banks as an example of where to find value in the Australian market.

Similar to the outlook for global cyclicals, the cycle is supportive of banks. The key supportive cycle arguments for the banks are:

The post-GFC average P/B for the ASX200 Banks index is ~1.7x1. During March 2020 as COVID drove markets and particularly more cyclical value stocks lower, Australian banks in aggregate traded at around book value; similar valuations on banks were seen during the depths of the GFC. Through the latter half of 2020, banks recovered alongside improved economic optimism. Notwithstanding the recent outperformance Australian banks now trade at less than 1.5x book value, below the post-GFC average. Based on this measure, the banks are supported by the ‘V’ of the CVS framework. 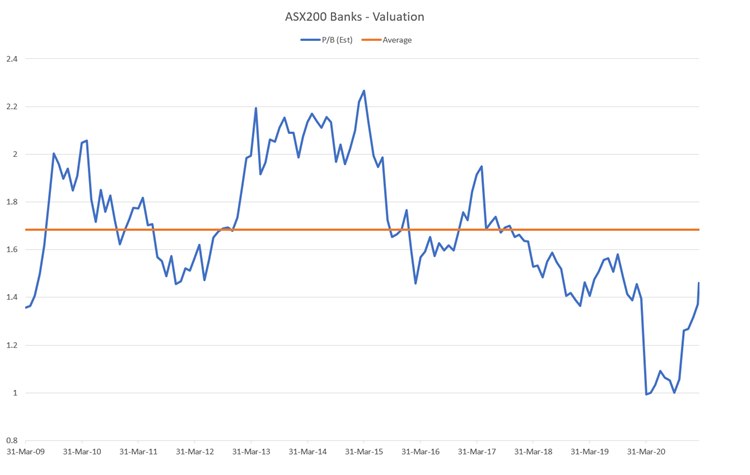 The path of sentiment for Australian banks largely follows the sentiment of global value stocks. Banks were hit especially hard during March 2020, underperforming ASX200 index by approximately 9%1; sentiment following this move was extremely negative. As economic optimism increased, sentiment for value stocks and banks both in Australia and globally improved. The major regime shift driven by the announcement of a positive COVID-19 vaccine had a significantly positive impact on sentiment for banks; since the announcement, banks have outperformed the market by close to 30%1. As with global value stocks, the positive turn in sentiment for banks is an important shift, and one which Russell Investments expect to support the sector over the next 12 months.

Due to the relative attractiveness of value stocks based on the CVS process, our equity funds have a tactical overweight position to the value factor, relative to our strategic position.

Banks are traditional value stocks, and when viewed through the lens of the CVS process, Australian banks appear attractive on a tactical investment horizon. The expectation of higher earnings being generated by the banks as well as the potential for alleviation in bad debt provisioning is a benefit for investors, specifically those looking for income as dividend expectations increase. Supportive valuation and positive sentiment further reinforce the banks as an attractive opportunity.

How this applies to financial products (example)

The Russell Investments High Dividend Australian Shares ETF (RDV) has an objective to provide investors with above market dividend yield, and therefore tilts towards those stocks that pay higher levels of income. Until recently, the high yielding part of the market has underperformed as value stocks generally lagged relative to their growth counterparts. Based on the CVS process, Russell Investments believe that yield stocks, as a subset of value stocks, are now attractive – and the banks are an example of this. Based on the outlook for the economy and potential for higher dividends from the banks in future as well as continued re-rating of bank valuations higher, Russell Investments believe RDV is well placed to provide investors with attractive income as well as potential upside from exposure to the banking sector.