Asia-Pacific: Waiting on hopes and fears

Economic and market conditions in the Asia-Pacific region are less than dynamic as we move towards 2016.

In Japan, despite the “Three Arrows” of Abenomics – fiscal stimulus, monetary stimulus and structural reform – the evidence of economic recovery is patchy and unconvincing. GDP data has skirted (and barely avoided) recording a “technical recession.”

Meanwhile, in China, GDP growth has slipped from the 7% to 8% range to the 6% to 7% range. A number of Chinese indicators are very weak, notably trade and construction activity.

The Australian national income numbers are holding up, but with weak commodity prices, a softening housing sector and flat corporate profits, it’s hard to get too excited. Growth in New Zealand is acceptable, but modest.

Indeed, of the major regional economies, only India is delivering some upbeat results.

The chart below shows recent GDP trends in a selection of regional economies: 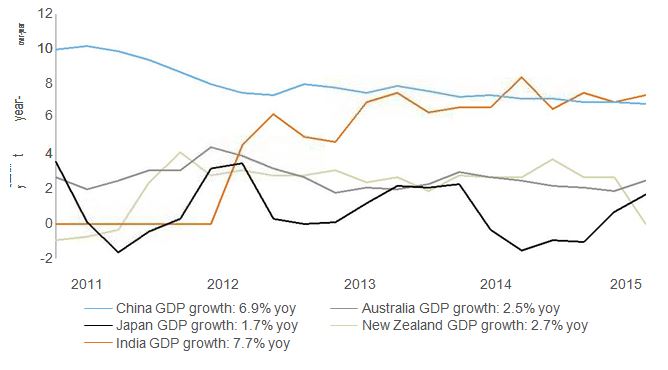 Growth drivers for the year ahead

Whether market “hopes” for the recovering economies or “fears” for the vulnerable nations will gain the ascendancy in 2016 depends in large part on the growth outcomes in the U.S. and Europe. We are sufficiently positive about the global outlook to expect ongoing recovery in Japan; soft landings in China and Australia; and steady growth in India—and, at lower levels, in New Zealand.

Greater or lesser currency weakness across much of the region, and broadly stimulatory monetary policies, are common themes in our optimistic diagnosis for the year ahead. In Japan in particular, fiscal stimulus and a program of corporate reform should provide the economy with added support, as will lower energy prices.

In China, we are witnessing a convincing program of market reform—recently acknowledged by the International Monetary Fund with its inclusion of the renminbi in the international Special Drawing Rights (SDRs) currency basket. The transition from an economy driven by fixed investment to one driven by consumption and services also appears to be on track.

Further south, in Australia, both fiscal and monetary policy are somewhat gridlocked, and the downside risks following a record housing boom remain a watch-point. The current data as of Dec. 11, 2015, remains mixed rather than negative, however, and we do not expect recession in 2016.

Applying our investment strategy process of value, business cycle and sentiment we get the following:

Equity markets in the Asia-Pacific region offer reasonable value, in our assessment. We are broadly positive about the cycle outlook, but we are not looking for more than single-digit percentage returns in 2016. Sentiment is muted, though it offers some potential for upside.

Japan is our preferred equity market in the region, benefitting as it does from good corporate profit growth, a favourable policy backdrop, lower oil and gas prices, as well as a weaker yen.

China “A” shares had a roller-coaster ride in 2015, but we believe that the valuation excesses of mid-year have now been largely unwound. Tailwinds from the market-deregulation program, in conjunction with China’s good long-term growth prospects, provide this market with support. Only uncertainties regarding debt imbalances hold us back from a more overtly positive stance, for now.

In Australia, the equity market is still trading down at 2006 levels, and the dividend yield is up to an eye-catching 5%, based on the S&P/ASX 200 Index as of Dec. 11, 2015. Value is less compelling than it might at first appear, however. The thin price-to-earnings discount to global valuations leaves us cautious about this materials- and financials-heavy market, however, as do the lack of earnings momentum and the stretched payout ratios. Cyclical factors are acceptable, but no better than neutral. Sentiment is negative.

Issued by Russell Investment Management Ltd ABN 53 068 338 974, AFS License 247185 ("RIM"). This document provides general information only and has not been prepared having regard to your objectives, financial situation or needs. Before making an investment decision, you need to consider whether this information is appropriate to your objectives, financial situation or needs. This information has been compiled from sources believed reliable, but is not guaranteed. Past performance is not a reliable indicator of future performance. Copyright © 2016 Russell Investments. All rights reserved. This material is proprietary and may not be reproduced, transferred or distributed in any form without prior written permission from Russell Investments.

The views in this Annual Outlook are subject to change at any time based upon market or other conditions and are current as of the date at the top of the page. While all material is deemed to be reliable, accuracy and completeness cannot be guaranteed.

Keep in mind, like all investing, that multi-asset investing does not assure a profit or protect against loss.

No model or group of models can offer a precise estimate of future returns available from capital markets. We remain cautious that rational analytical techniques cannot predict extremes in financial behavior, such as periods of financial euphoria or investor panic. Our models rest on the assumptions of normal and rational financial behavior. Forecasting models are inherently uncertain, subject to change at any time based on a variety of factors and can be inaccurate. Russell believes that the utility of this information is highest in evaluating the relative relationships of various components of a globally diversified portfolio. As such, the models may offer insights into the prudence of over or under weighting those components from time to time or under periods of extreme dislocation. The models are explicitly not intended as market timing signals.

The Business Cycle Index (BCI) forecasts the strength of economic expansion or recession in the coming months, along with forecasts for other prominent economic measures. Inputs to the model include non-farm payroll, core inflation (without food and energy), the slope of the yield curve, and the yield spreads between Aaa and Baa corporate bonds and between commercial paper and Treasury bills. A different choice of financial and macroeconomic data would affect the resulting business cycle index and forecasts.

Investment in Global, International or Emerging markets may be significantly affected by political or economic conditions and regulatory requirements in a particular country. Investments in non-U.S. markets can involve risks of currency fluctuation, political and economic instability, different accounting standards and foreign taxation. Such securities may be less liquid and more volatile. Investments in emerging or developing markets involve exposure to economic structures that are generally less diverse and mature, and political systems with less stability than in more developed countries.

Currency investing involves risks including fluctuations in currency values, whether the home currency or the foreign currency. They can either enhance or reduce the returns associated with foreign investments.

Bond investors should carefully consider risks such as interest rate, credit, default and duration risks. Greater risk, such as increased volatility, limited liquidity, prepayment, non-payment and increased default risk, is inherent in portfolios that invest in high yield (“junk”) bonds or mortgage-backed securities, especially mortgage-backed securities with exposure to sub-prime mortgages. Generally, when interest rates rise, prices of fixed income securities fall. Interest rates in the United States are at, or near, historic lows, which may increase a Fund’s exposure to risks associated with rising rates. Investment in non-U.S. and emerging market securities is subject to the risk of currency fluctuations and to economic and political risks associated with such foreign countries.

The S&P 500, or the Standard & Poor’s 500, is a stock market index based on the market capitalizations of 500 large companies having common stock listed on the NYSE or NASDAQ.

The Russell Eurozone Index measures the performance of the equity markets located in the Euro Zone, based on all investable equity securities in the region.

The Bloomberg U.S. Aggregate Bond Index is a broad based index often used to represent investment grade bonds being traded in United States. It is maintained by Bloomberg.

Bloomberg U.S. Corporate Investment Grade Index is an unmanaged index consisting of publicly issued U.S. Corporate and specified foreign debentures and secured notes that are rated investment grade (Baa3/BBB-or higher) by at least two ratings agencies, have at least one year to final maturity and have at least $250 million par amount outstanding.

The MSCI EMU (European Monetary Union) Index is an unmanaged index considered representative of the EMU group of countries.

The S&P/ASX 200 Index tracks the performance of 200 large companies based in Australia.

The trademarks, service marks and copyrights related to the Russell Indexes and other materials as noted are the property of their respective owners. The Russell logo is a trademark and service mark of Russell Investments.

Copyright © Russell Investments 2016. All rights reserved. This material is proprietary and may not be reproduced, transferred, or distributed in any form without prior written permission from Russell Investments. It is delivered on an ‘as is’ basis without warranty.

Russell Investments is a trade name and registered trademark of Frank Russell Company, a Washington USA corporation, which operates through subsidiaries worldwide and is part of London Stock Exchange Group.