Currencies: Don’t be tempted by yield

Despite offering higher interest rates than most of their developed-market counterparts, the U.S. dollar (USD) and the New Zealand dollar (NZD) were the two worst performers among Group of Ten (G10) currencies in 2017. We would not bet on a reversal of that trend. The story is different with emerging markets (EM) currencies, which are still appealing despite a tentative recovery this year.

The so-called “dollar bloc” (comprising the U.S., Canada, Australia and New Zealand) boasts higher interest rates than the remaining G10 countries.7 If the Fed continues to hike interest rates in 2018, the yield difference between the USD and the euro is likely to approach 3% as the ECB has all but ruled out any deposit rate increases from the current level of -0.4% in effect since March 2016. Swedish, Swiss and Japanese central bankers have also taken their deposit rates into negative territory. It may be tempting to buy high-yielding dollar-bloc currencies to benefit from their interest-rate advantage. We believe that investors should resist that urge.

In terms of valuations, the high-yielding G10 currencies are still expensive, except for the Canadian dollar (CAD). Relative to purchasing power parity, the U.S. dollar is around 10% overvalued vis-à-vis the euro. This partly explains why EUR/USD rose by 13% this year, despite the interest-rate differential widening in favour of the greenback. Currency markets were surprised by how cautiously the Fed raised interest rates and are already looking ahead to the end of the tightening cycle. The ECB, on the other hand, did not raise rates at all, but merely announced a reduction in its bond purchase program for 2018. In contrast to the U.S., the eurozone is at an early stage of its exit from very loose monetary policy.

We believe that the euro, Japanese yen and British pound will hold up well against the U.S. dollar despite being at a yield disadvantage. The antipodean currencies, (AUD and NZD), are at risk of underperforming as their rate buffer is slim relative to history. As commodity-linked currencies, they are also more vulnerable to any potential growth slowdown or downward correction in risk assets.

As global equity markets scale new heights going into 2018, it is worth revisiting the relationship between exchange rates and risk assets. Currencies that go up when equity markets go down can be thought of as “diversifiers” of stocks and other growth assets. It may be worth having some exposure to diversifying currencies even when their interest rates are low. On the other hand, currencies that have a stable positive correlation with equities should be considered “risky”. In the chart below, we plot the trailing 10-year correlation of seven important currencies with global equity market returns, based on weekly data.

The two currencies with the most negative correlations are the yen (JPY) and the Swiss franc (CHF). Traditionally these are known as “safe haven” currencies with consistently diversifying properties. The U.S. dollar also offered diversification benefits over the last 10 years, but its correlation with equity markets over other time periods is less stable than that of JPY and CHF. Among these diversifying currencies, we prefer JPY over CHF as the yen is significantly cheaper than CHF on our preferred valuation measures, including, for example, purchasing power parity.

Correlations of currency returns with the global equity index 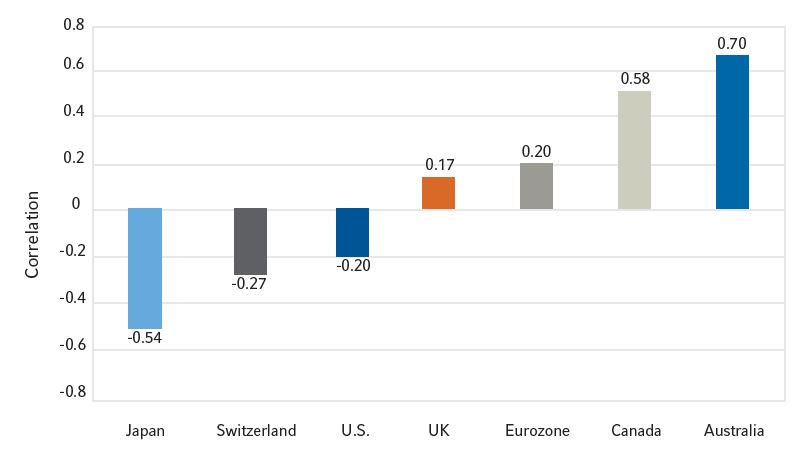 Source: Thomson Reuters Datastream, as of November 13, 2017, as measured by the MSCI World local index

Commodity-linked currencies such as the Australian dollar and the Canadian dollar have high positive correlation with the global equity market and are likely to go up and down in unison with risk assets. That makes them undesirable from a risk perspective although they usually come with higher interest rates. Among the risky currencies, CAD is more attractive than AUD and NZD, both from valuation and cyclical perspectives.

Regarding talk of U.S. protectionist trade policies, the Trump administration is the dog that barked, but hasn’t bitten yet. The U.S. is in the process of renegotiating the rules governing the North American Free Trade Agreement (NAFTA), but it has neither withdrawn from the trade agreement nor branded China a currency manipulator. Supported by a synchronised global upswing, the economic fundamentals of EM economies are sound, as evidenced by improving current-account balances. Despite continuing the tentative recovery that EM currencies began in 2016, as shown in the chart below, we believe they are still cheaply valued and offer potential for investors who increase their exposure to these currencies. 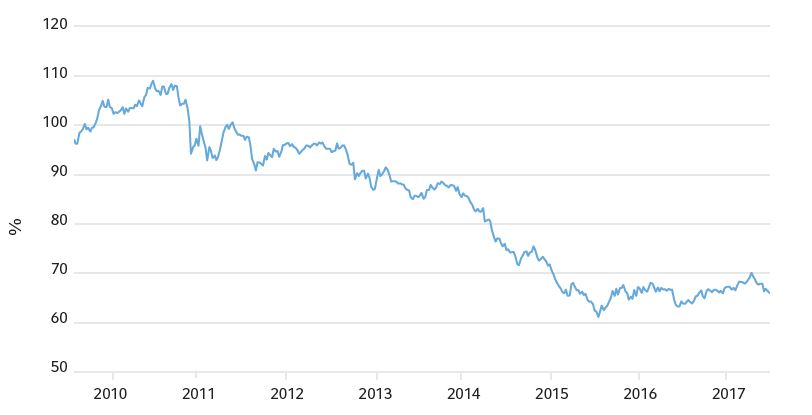