The long term average for the VIX over its 30-year history (from 1986 – 2016) is 20.1¹. The average, however, tells only part of the story since volatility is not normally distributed (notice the significant right tail in the chart below). 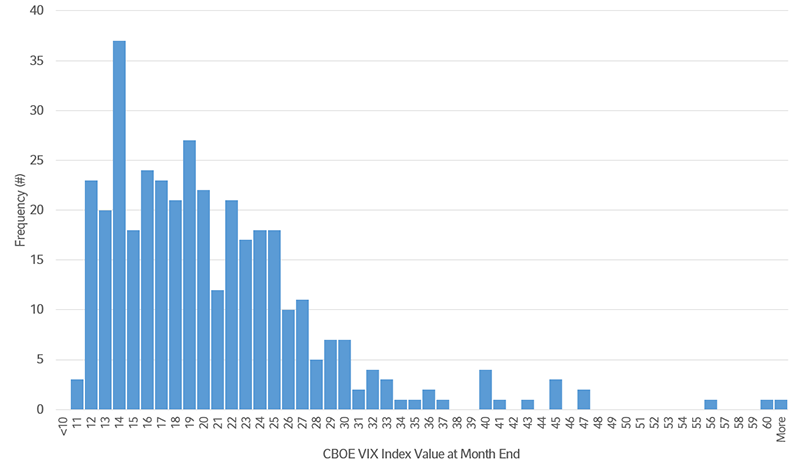 Even statistical measures such as the median (18.5), skewness (1.9) and kurtosis (5.7) do not paint as clear a picture as many would like.

Since 1986, we see only a single month where the VIX index finished with a value less than the one we saw last Friday. That occurred on 12/31/2006 when the VIX finished at 10.42. Perhaps surprising to some is how expensive equity protection remains. As of last Friday, purchasing a 1-year put on the S&P 500 with a strike price of 90% cost 3.1% (310 basis points)² while this is “relatively” cheap compared to history, protection in absolute terms is always expensive.

It is also illustrative to break this data into deciles (see table below).

History suggests that volatility tends to remain in a particular “regime” (i.e., high or low) for extended periods of time and shifts between regimes, when they occur, tend to occur rather rapidly.

We are in interesting times. The talking heads on television increasingly talk about volatile markets, while the data suggests these are among the most benign markets we have seen in 30 years. We can be certain that volatility will return someday and when it does, owning risky assets won’t feel anything like it does today.