How high can the U.S. dollar go?

The trade-weighted dollar bottomed in late 2011 and has been appreciating since then. It is some 5% below the previous peak of 2002, which suggests that the dollar’s ascent against the major currencies is getting long in the tooth and valuation is becoming a headwind. 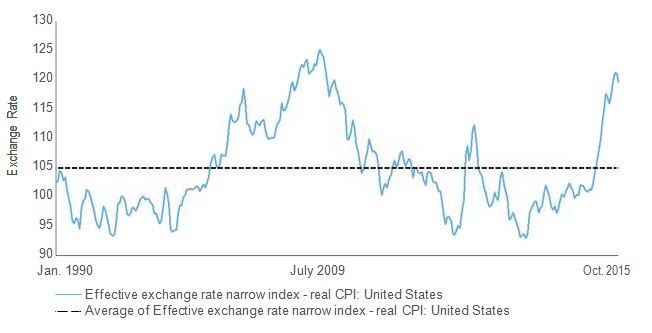 While the greenback is fairly valued against the pound, it is 10% rich versus the euro (EUR) and 20% rich versus the Japanese yen (JPY) according to purchasing power parity as of Dec. 11, 2015. However, previous dollar cycles suggest that developed market currencies have a tendency to overshoot fair value by 20% to 30%.

For the dollar to reach its 2002 valuation peak requires good support from sentiment and cycle factors, which we think will be forthcoming in the first half of 2016 due to policy divergence. The U.S. Federal Reserve will probably continue raising interest rates while other major central banks are still easing policy or standing pat. If previous cycles are a guide, the EUR/USD exchange rate could drop to around parity and USD/JPY could reach 125 before the dollar bull cycle ends. Due to its high valuation, the pound (GBP) is most at risk and GBP/USD could fall to 1.40.

Even after two years of weakness, we think that commodity-related currencies (the Australian, New Zealand and Canadian dollars) remain vulnerable to further softness in the prices of their main exports, mostly raw materials.

Emerging market (EM) currencies in our view could fall further against the dollar than those of the major developed countries. Much of that risk is due to weakness in the Chinese yuan.

The dollar peg put in place by China after the global financial crisis led to strong real appreciation of the Chinese yuan over the last five years. We think that the Chinese currency could be around 10% overvalued. To restore competitiveness and boost its economy, we think that China is likely to embark on a gradual depreciation of the yuan in 2016.

In the short-term, weakness in the Chinese Yuan could drag down other EM currencies. However, some of the other emerging market countries have seen their currencies fall to attractive levels. Sometime in 2016, we expect to see the start of a multi-year period of EM currency outperformance.

Where could we be wrong?

We see two main risks to the central scenario outlined above:

We see 5% upside potential for the trade-weighted U.S. dollar against developed market currencies and 10% against emerging markets. However, we think that this dollar strength is mainly going to play out in the first half of 2016. Sometime later in the year we expect to see the peak in the U.S. dollar bull cycle and the start of a multi-year period of EM currency outperformance.

Issued by Russell Investment Management Ltd ABN 53 068 338 974, AFS License 247185 ("RIM"). This document provides general information only and has not been prepared having regard to your objectives, financial situation or needs. Before making an investment decision, you need to consider whether this information is appropriate to your objectives, financial situation or needs. This information has been compiled from sources believed reliable, but is not guaranteed. Past performance is not a reliable indicator of future performance. Copyright © 2016 Russell Investments. All rights reserved. This material is proprietary and may not be reproduced, transferred or distributed in any form without prior written permission from Russell Investments.

The views in this Annual Outlook are subject to change at any time based upon market or other conditions and are current as of the date at the top of the page. While all material is deemed to be reliable, accuracy and completeness cannot be guaranteed.

Keep in mind, like all investing, that multi-asset investing does not assure a profit or protect against loss.

No model or group of models can offer a precise estimate of future returns available from capital markets. We remain cautious that rational analytical techniques cannot predict extremes in financial behavior, such as periods of financial euphoria or investor panic. Our models rest on the assumptions of normal and rational financial behavior. Forecasting models are inherently uncertain, subject to change at any time based on a variety of factors and can be inaccurate. Russell believes that the utility of this information is highest in evaluating the relative relationships of various components of a globally diversified portfolio. As such, the models may offer insights into the prudence of over or under weighting those components from time to time or under periods of extreme dislocation. The models are explicitly not intended as market timing signals.

The Business Cycle Index (BCI) forecasts the strength of economic expansion or recession in the coming months, along with forecasts for other prominent economic measures. Inputs to the model include non-farm payroll, core inflation (without food and energy), the slope of the yield curve, and the yield spreads between Aaa and Baa corporate bonds and between commercial paper and Treasury bills. A different choice of financial and macroeconomic data would affect the resulting business cycle index and forecasts.

Investment in Global, International or Emerging markets may be significantly affected by political or economic conditions and regulatory requirements in a particular country. Investments in non-U.S. markets can involve risks of currency fluctuation, political and economic instability, different accounting standards and foreign taxation. Such securities may be less liquid and more volatile. Investments in emerging or developing markets involve exposure to economic structures that are generally less diverse and mature, and political systems with less stability than in more developed countries.

Currency investing involves risks including fluctuations in currency values, whether the home currency or the foreign currency. They can either enhance or reduce the returns associated with foreign investments.

Bond investors should carefully consider risks such as interest rate, credit, default and duration risks. Greater risk, such as increased volatility, limited liquidity, prepayment, non-payment and increased default risk, is inherent in portfolios that invest in high yield (“junk”) bonds or mortgage-backed securities, especially mortgage-backed securities with exposure to sub-prime mortgages. Generally, when interest rates rise, prices of fixed income securities fall. Interest rates in the United States are at, or near, historic lows, which may increase a Fund’s exposure to risks associated with rising rates. Investment in non-U.S. and emerging market securities is subject to the risk of currency fluctuations and to economic and political risks associated with such foreign countries.

The S&P 500, or the Standard & Poor’s 500, is a stock market index based on the market capitalizations of 500 large companies having common stock listed on the NYSE or NASDAQ.

The Russell Eurozone Index measures the performance of the equity markets located in the Euro Zone, based on all investable equity securities in the region.

The Bloomberg U.S. Aggregate Bond Index is a broad based index often used to represent investment grade bonds being traded in United States. It is maintained by Bloomberg.

Bloomberg U.S. Corporate Investment Grade Index is an unmanaged index consisting of publicly issued U.S. Corporate and specified foreign debentures and secured notes that are rated investment grade (Baa3/BBB-or higher) by at least two ratings agencies, have at least one year to final maturity and have at least $250 million par amount outstanding.

The MSCI EMU (European Monetary Union) Index is an unmanaged index considered representative of the EMU group of countries.

The S&P/ASX 200 Index tracks the performance of 200 large companies based in Australia.

The trademarks, service marks and copyrights related to the Russell Indexes and other materials as noted are the property of their respective owners. The Russell logo is a trademark and service mark of Russell Investments.

Copyright © Russell Investments 2016. All rights reserved. This material is proprietary and may not be reproduced, transferred, or distributed in any form without prior written permission from Russell Investments. It is delivered on an ‘as is’ basis without warranty.

Russell Investments is a trade name and registered trademark of Frank Russell Company, a Washington USA corporation, which operates through subsidiaries worldwide and is part of London Stock Exchange Group.