What is causing equity markets to fall?

A combination of high inflation readings, hawkish comments from central banks and escalating tensions between Russia and Ukraine are causing equity markets to decline. In the United States, inflation is running at 7.5%—the highest level in 40 years—and markets now expect the Fed to lift interest rates six times this year. Amid the turbulence, however, it’s important to keep in mind that equity markets have climbed significantly since their March 2020 lows. Case-in-point: At its recent peak, the U.S. stock market had risen by 117%, while non-U.S. developed markets had gained 78%. These gains had been accompanied by signs of investor exuberance, evident in the crypto mania, meme stocks and SPACs (special purpose acquisition companies). Given all this, it’s not too surprising that markets have weakened.

Market volatility has increased as Russia deploys troops near its border with Ukraine. Russia is demanding that Ukraine is denied NATO (North Atlantic Treaty Organization) membership, and that NATO withdraw strategic weapons from within a threatening range of Russia. Russia is also looking to prevent further NATO expansion and to expedite the approval of a second natural gas pipeline, Nordstream 2, between Russia and Germany.

In our viewpoint, a limited invasion of the breakaway regions of Donetsk and Luhansk seems probable, but we think that a larger, full-scale invasion of Ukraine is less likely. This is because we see the costs to Russia and Western Europe as prohibitively high in a full-invasion scenario. Russia would face the prospect of significant sanctions and a further escalation of NATO defenses. The country could retaliate by cutting off natural gas supplies to Europe (Germany relies on Russia for around 60% of gas supplies), but at the cost of a significant loss of import revenue from gas sales.

Is concern over a larger market pullback warranted?

Financial markets tend to recover quickly from geopolitical events. The most obvious historical comparison, which was also the most significant in terms of market impact, is the Iraqi invasion of Kuwait in 1990. The S&P 500 Index fell 1.1% on the day, as the probability had been discounted by markets. The benchmark U.S. equity index would go on to decline by 16.9% over the course of 10 weeks, taking just over six months to recover. The key takeaway here: Stock markets can move past geopolitical events relatively quickly.

Historically, the main driver of whether we see a correction (a fall of, say, 10% to 15%) or even a mild bear market (with, say, a 20% decline that turns around relatively quickly) as opposed to a major bear market is whether there is a recession in the United States. In our view, recession risks, at least for the next 12 to 18 months, look relatively low. Strong household and corporate balance sheets leave us positive on the ability of the U.S. and global cycle to deliver significantly above-trend economic growth in 2022. Although the Fed is likely to begin lifting interest rates as soon as March, we believe it will take until at least the second half of next year for monetary policy to transition from being less stimulative to having a contractionary impact on the economy.

Key watchpoints amid the crisis

We evaluate potential market opportunities through the lens of our cycle, valuation and sentiment (CVS) decision-making process. We’re reasonably confident in the medium-term cycle outlook, and note that valuation has improved slightly as markets correct (although equity markets remain expensive from a long-term perspective). This makes sentiment the main watchpoint. Our composite sentiment index tracks technical, survey and positioning indicators to gauge whether investors are excessively optimistic or pessimistic. Sentiment has become oversold as markets have declined, although we believe it is not yet at a level of panic that provides a signal to add risk to portfolios. 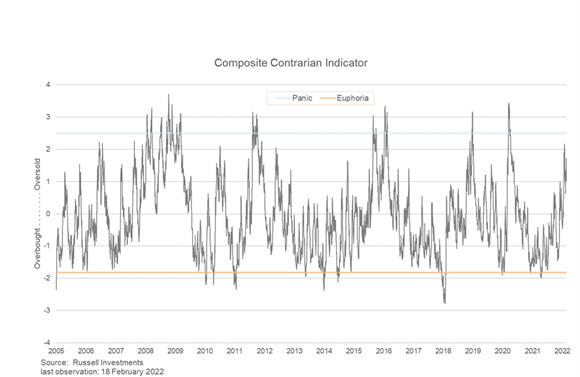 We will monitor events in Ukraine closely, but with an eye on sentiment indicators to judge whether investor psychology has reached an unsustainable level of panic that justifies a more risk-on stance.