Quitting tobacco is good for your health. But how is it for your portfolio?

When it comes to ESG mandates, can excluding specific securities from a portfolio negatively impact performance? In most cases, probably not. To understand why, let’s take a deep-dive into one of the most common security exclusions: tobacco.

To exclude or not to exclude? Tobacco under the microscope

To do this, we first reviewed the weight and performance of tobacco in both the MSCI World Index and the Russell 1000® Index. Then, we evaluated the weight of tobacco in active portfolios to see how active managers—charged with outperforming broad-market benchmarks—opt into tobacco. While some portion of the active universe may be tasked with building tobacco-free portfolios, this isn’t the case for most managers.

Our research found that tobacco exclusions do not have a negative performance impact on portfolios, whether they are systematic, passive or active. We arrived at this conclusion by addressing three fundamental questions:

Question #1: Is tobacco more than 1 to 2% of the broad market indexes?

A material consideration in replicating benchmarks is the ability to select from the same universe of securities. Our prior research has demonstrated that small portfolio restrictions—in the range of 1 to 2%—do not lead to material deviations from the index portfolio. So, then, does tobacco make up more than 1 to 2% of the broad market index?

Our research clearly says no. Chart 1 shows the weight of tobacco in two broad-market indexes from 2003 to 2018, along with its security count. As you can see, tobacco represents a small number of securities, and is always less than 2% of both the Russell 1000 and the MSCI World Indexes. 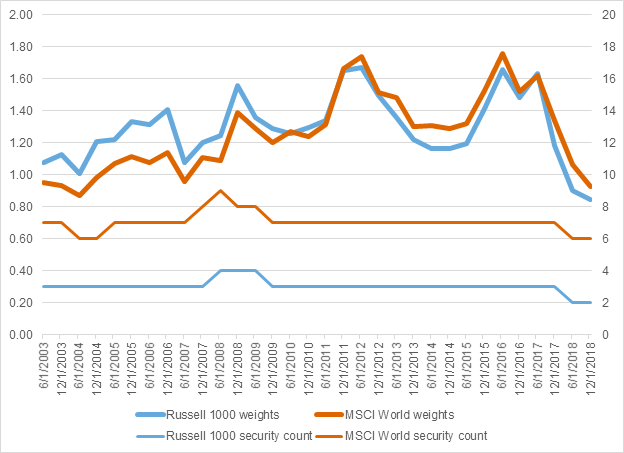 Question #2: Is tobacco performance consistently strong, relative to other industries?

Portfolio managers for active equity products and systematic equity products are typically tasked with generating returns in excess of their industry benchmarks. Index-replication products are also expected to return performance that tracks an index. In all of these cases, it’s possible that tobacco is excluded from the list of investable securities.

The question then becomes: When tobacco is excluded, are there other options for these products to meet their performance requirements?

Can a portfolio’s losses be attributed to an industry-specific exclusion?

We’ve seen instances where specific losses to a portfolio are directly attributed to a tobacco exclusion. From our vantage point, such an argument only makes sense if tobacco—or any industry, for that matter—could be expected to outperform other segments of the market over the intermediate or long term. This, however, runs counter to one of our core investing beliefs, which is that no particular industry—over the intermediate or long term—can generate persistent above-market returns.

How does this extend to a strategy or an index replication?

Skilled managers will discover an optimal way to replace the missing allocation to tobacco. With a gap of less than 2%, and several other high-returning industries, we believe that such optimisation won’t detrimentally impact performance.

For example, if the average market return is 10%, and the tobacco industry comprises 2% of the index—and returns 15%—then the balance of the portfolio is returning roughly 9.90%. That’s a gap of just 10 basis points. This gap can be partially or fully mitigated by using an optimisation to replace the missing allocation to tobacco.

If some of the desired outperforming securities—tobacco, in this case—are not available to the active manager, then achieving strong outperformance may seem more challenging. Importantly, however—as the chart above shows—several other industries exhibited returns that were higher than tobacco, so active managers have several options for selecting outperforming securities. In other words, there are plenty of fish in the sea.

Let’s take this one step further. Does the existence of non-tobacco industries with higher returns than tobacco suggest that active managers should have been able to select outperforming securities? No. Ultimately, how active managers select securities is complex and combines both skill and luck. With or without tobacco in the choice set, active managers may underperform or outperform their index.

Our conclusion here is as obvious as it looks. With many options for building portfolios—active, systematic and passive—excluding one industry doesn’t negatively impact the potential for achieving performance targets. We disagree with the notion that excluding a security from a portfolio costs any specific fund its performance—as long as the security comprises 2% or less of the available universe.

Question #3: Do active managers overweight tobacco without an exclusion mandate?

The final question we sought to address was what role tobacco plays in active portfolios. To answer this, we examined the holdings of active U.S. large-cap and global equity managers. Two results stood out from this analysis:

Why? We suspect that tobacco-free portfolios may be driven by client pressure, or simply strategic positions for active managers who are seeking to add value above an index. To observe how active managers position themselves, we took annual snapshots of two equity universes on June 30 in every year from 2003 to 2018.

As Table 3 shows below, approximately three-quarters of the universe is underweight tobacco in our U.S. large-cap equity universe. What’s more, roughly 50-70% of the universe avoids tobacco completely. While the existence of some tobacco-free portfolios is to be expected, the fact that 50% or greater exclude it directly strikes us as surprising. We believe this is unlikely related to client requests, particularly for U.S.-domiciled funds, where ESG-driven exclusions are less prevalent than in other parts of the world.

It’s also worth pointing out that tobacco exposure has declined over the 2003-2018 period as well. This observation is less surprising, given the growing interest in excluding tobacco from portfolios in Europe and Australia.

Chart 4 shows the rolling interquartile range and median active weights for tobacco for these same U.S. large-cap active products. We can clearly see that the median is often equal to the 25th percentile, indicating that more than half the universe has a zero weight despite a positive benchmark weight.

How do tobacco underweights differ on a global scale? We found that anywhere from one-half to three-quarters of our global equity universe is underweight tobacco. In addition, 36% to 62% avoid tobacco completely. While these percentages are lower than their U.S. large-cap counterparts, they’re still material. Tobacco exposure is also declining globally.

In Chart 5, we show the rolling interquartile range and median active weights for tobacco for these same global active products. As is the case with U.S. large-cap equity active products, there’s some portion of the universe where the median and the 25th percentile are the same, indicating that more than half of the global universe holds no tobacco stocks.

Our research shows that holding no tobacco—or underweighting tobacco—is common in both active broad-market U.S. large-cap and global portfolios. Yet, we believe it’s unlikely that a majority of active managers have been given a tobacco-free mandate over the past 15 years.

What stands out to us most is that active managers—seeking to outperform the benchmark AND having the flexibility to hold tobacco—are often choosing not to do so. This leads us to conclude that most managers don’t expect tobacco to outperform the broad market index.

Benchmark-replicating strategies and active portfolios both have many paths toward fulfilling performance requirements. Restricting active portfolios from investing in tobacco is clearly a non-binding constraint for a sizable portion of the active universe.

Ultimately, the notion that excluding tobacco from portfolios is a detriment to performance is overstated. Given that tobacco is one of the most commonly excluded securities, what rings true for tobacco likely rings true for all: Small exclusions designed to achieve an ESG mandate are unlikely to have a negative impact on performance. Both ESG investors and the Surgeon General should be happy to hear that news.

Ross, Leola and Ouyang Miao (2018). Negative screening and performance consequences: How much is too much? Russell Investments Research Report